For a long time, the lofts of irons were never of great concern to golfers. Ever since the move to numerical clubs, from the more exotically-named versions (niblick, mashie, cleek, etc), golfers generally knew roughly how far they hit each iron; and this didn’t change much from year-to-year, or between manufacturers.

With around 48-degrees of loft on the traditional Pitching Wedge, sets usually reduced in increments of around 4-degrees to a 4-iron at around 22-degrees. Additionally, until the emergence of cavity-backed perimeter weighting on a mass scale with the PING Eye 2, many golfers were reliant on bladed irons which offered less forgiveness, placing a real premium on finding the centre of the clubface. Couple these weaker-lofted blades with less technologically advanced golf balls, and it’s not hard to see how the great Ben Hogan only relied on his 7-iron to carry 135 yards.

So what happened? Marketing … in a word.

The 2000s saw a clambering for distance across the sport. The introduction of the Titleist Pro V1 and the Callaway Big Bertha meant that golfers were hitting the ball farther than ever before. However, keen to not let the game get away from them, governing bodies implemented restrictions on the ever-growing size of clubheads, and elasticity of both the golf ball and the driver face. This made it more difficult for manufacturers to claim huge increases in distance from new drivers - although this certainly didn’t stop them from trying!

Perhaps there could be another area of the bag that might benefit from the same strategy. It would be great for the manufacturers if golfers switched their irons more regularly. After all, a full set will usually cost much more than a single metalwood … But, how could they entice golfers to change their buying habits? The aforementioned Eye 2s were in PING’s lineup for around a decade, with many golfers hanging on to theirs for much longer. Perhaps, the same tactics that had been applied to the metalwood market could work for irons. Golfers always like to hit the ball longer!

And so it was that manufacturers started to tweak lofts downwards. This meant that when you tried that shiny new 7-iron, it almost certainly went further than your old club with the same number printed on the bottom. To show just how far things have come over the past couple of decades, the PING Eye 2’s 7-iron had a loft of 36-degrees, this compares with 26-degrees on the current Titleist T-400 series. If golfers generally see around 10-yards of difference for every 4-degrees, it’s perhaps unsurprising that the T-400s will likely go more than 25-yards farther. 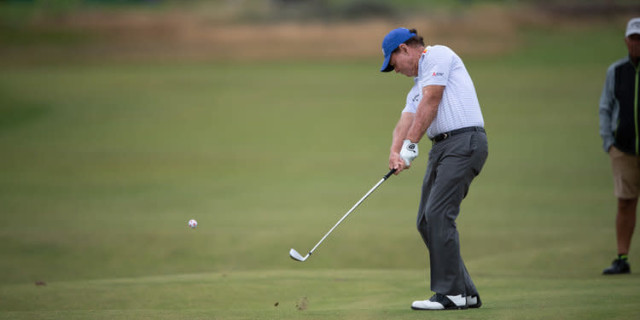 The manufacturers have a different view of the reasoning behind this phenomenon, and it’s one that also carries some weight. A usual argument would be that they have added more technology to help the ball into the air for the average club golfer. However, due to the increased launch, they needed to knock loft from the clubs to prevent them from flying sub-optimally (too high).

Whilst this certainly has a large element of truth, this doesn’t appear to be the case at the less-lofted end of the bag. Loft generally helps to create spin on a golf ball, thus keeping it in the air. But if you’re not able to generate enough swing speed to impart this spin, you’ll likely see your longer irons struggling to reach the peak of their trajectory.

Incidentally, this is where the hybrid club comes in. Manufacturers saw the problem this created for many club golfers and developed the hybrid into a long-iron replacement. Originally released by TaylorMade as a ‘Rescue’, designed to gauge the ball out of tricky lies, the hybrid has become a lifeline to those looking for a little more help in getting the ball into the air in order to take advantage of the distance that a reduction in loft can bring.

At the other end of the bag, we’ve also seen the introduction of the Gap Wedge, designed to fill the space between an ever-decreasing lofted Pitching Wedge and the standard 56-degree Sand Wedge. Another club you can purchase all shiny and new from your favourite golfing retailer!

So that’s how we got to where we are today! With no standard loft for each iron, and these even differing greatly between models from the same manufacturer, the best advice (as always) is to get custom fit for your set. Stronger lofts can definitely be advantageous, particularly for those needing a little extra distance. Golfers just need to make sure that they understand the trade-offs that may come with this; less spin, potential for difficulty launching long irons, and perhaps the need for a Gap Wedge!

Everything You Need to Know About Golf Club Lofts

How to Fill The Top End of Your Golf Bag