Playing The Old Course Just Before The 150th Open

Note by Digital Editor Kieran Clark: "Playing The Old Course is always special, it's the most unique of creations that continually reveals more secrets each time you walk its fairways. Living in St Andrews, I have been deeply fortunate to revisit this most legendary of stages frequently, but experiencing it weeks ahead of the historic 150th Open - with all the grandstands in place - was something beyond expectations.

"Stewart, who has kindly written the following piece on his round and the journey to that point, surprised his 16-year-old son, Calum, by entering the ballot with me to play The Old. I was there with them four years ago when I saw the young man's enthusiasm for the place, but also his desire to play it himself. Well, this was finally his chance.

"This tale is a description of the public charms of St Andrews, this most famed of venues is open to all, the staging of a major championship, a father and a son, but also what it's like to tap into your inner 10-year-old and feel like you are taking the same steps as the world's best players."

I had been lucky enough to play The Old Course on three previous occasions and seasons in January, May and July, all via entering the ballot. The last time, July 2018, was the day before The Open at Carnoustie, and if you remember the conditions, the course was burnt out with hues of brown and whispy rough, the fairways running faster than the greens. Puffs of sand with every iron shot just like those highlights you see of Seve from generations past.

Just across the water, St Andrews was equally scorched by the summer heatwave.

The golf course that evening was also full of older champions, on the vast 5th/13th green, I found myself putting next to Mark O’Meara. However, the most magical thing about that day was that I couldn’t get a babysitter and so in tow walking the course with me were my children. My kids are no stranger to playing a golf course, so walking round wasn’t an issue, my eldest in particular got a huge kick from it, seeing how the ball ran, how shots should be played along the ground, and putting from 50 yards short of the 9th green.

For the following two years, he kept asking when it was his turn to play St Andrews, and we agreed that he would get the most out of it once he’d gotten his handicap down into the low 20s. That day came with his 14th birthday, but he had a nasty accident on his bike and then the pandemic hit and that was it for two more years.

Fast forward to June 2022, I entered the ballot with absolutely no expectations and yet, miraculously, we came out with a prime midday tee time. Naturally, I didn’t tell my son until 30 minutes before we were due to play. Turning the car from North Street into Golf Place is where the course reveals itself just like a Hollywood film set, the Dunvegan, the R&A Clubhouse, the 18th green, just like the TV pictures. However, this time it was even more special, the vast grandstand that lines the double 1st/18th fairway fully dressed in all its 150th Open splendour. 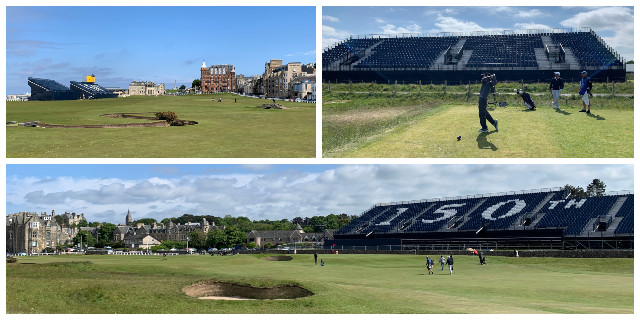 The first tee shot is usually the most nervous shot in golf, such a wide fairway so embarrassing if it were missed (I have missed it before) and the largest crowd who will ever watch me hit a shot. However, with the stands up it was the calmest I’d felt, it looked like a canyon, impossible to miss. My son said he felt nervous on the first tee but in hindsight it was better he didn’t know beforehand that we were playing as he wouldn’t have slept the night before! Cold on the tee with no prep, he carved a slice into the furthest stand, it bounced out to the middle of the fairway. Easy par to settle things.

Right going to spam you with some Old Course footage. The lad didn’t know he was playing here until 30 minutes before our tee time. Here he is bouncing his drive off the grandstand into the fairway. Par. pic.twitter.com/Pq5S2ufXED

When we got settled into a few holes it was interesting to note how differently the course played. The stroke saver book provided the non-Open sight lines, a few bumps on the horizon, the Leuchars control tower as lines from the tee. The addition of the TV camera towers gave more options for picking the line. The players will have in addition, the mobile cranes reaching into the sky. I will be listening to the player-caddie conversation with interest! Tiger Woods has always said that he would love to play The Old Course without these visual aids that his entire strategy is based on.

I play golf with my son regularly and unfortunately he’s now beating me more regularly, so it allowed me to relax about my own game and watch him play his shots. I initially wanted to caddie for him but he insisted I played (probably a reflection of my caddying skills) but it did allow for him to see how I played shots and then copy having not played many links courses previously.

After the ampitheatre of the start, holes 3-6 felt back to normal with only the occasional reminder such as the TV towers and scoreboards. Then we reached “The Loop” with the massive stand behind the 7th/11th green. This is going to be a special place to sit on competition days, from those stands it’s possible to watch play on four or even five holes. I actually felt that holes 7&11 played easier with the stand as the infinity effect of the estuary behind the green is lost and it gives more depth perspective.

Once the turn had been made, the St Andrews vista gradually gets closer to the player but this time there’s the added infrastructure for the ultimate major that is about to take place. Starting at the 14th hole, the corporate tents begin to appear, followed by the massive grandstand at the 17th.

It’s an overwhelming thought that this massive event is just about to take place and we’re lucky enough to have played the same course that Tiger, Rory, et al are about to play. My son clattered the Old Course Hotel on 17, I yet again left myself with the Road Hole Bunker between my ball and the hole and made another one of my famous up and downs. Will we see the same next Sunday, to win or lose the Claret Jug?

My overriding feeling walking up the 18th was unusual in that we did not feel out of place. There is a travelling circus visiting this very public golf course, but the day after The Open it will revert back to public use, the stands will go and the next fathers and sons will follow in the champion’s footsteps. It was an honour to play, but St Andrews also makes everybody feel like they belong.

After my son finished on the 18th, his first words to me were; "When can we come back?"

Everything You Need to Know About St Andrews

What Golfers Love About St Andrews

Tips For Planning a Golf Trip to St Andrews