TEN years ago we witnessed one of the most remarkable Open collapses. Adam Scott led by four shots with four holes to  play at Lytham but bogeyed each one to lose by one to Ernie Els.

And the memory of it all still haunts the Australian. Scott said: “It hurts more today than it did at the time. There is no tournament I want to win more. It felt closer to me than any of the American majors when I was young, so there was a strong connection there.”

He equalled the course record by shooting a six-under-par 64 in the opening round and took a four-shot lead into the final round.

When he holed a birdie on the 14th hole, his lead was four and he was already preparing his victory speech. History teaches us that it is never done until the final putt has been holed. 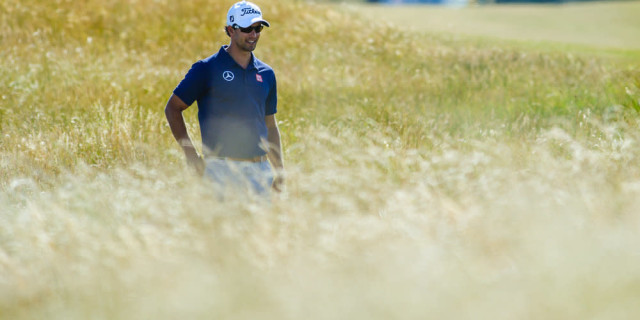 "I'm not one to get ahead of myself on the golf course in those situations," he said. "Everything is going well when you're four in front with four to go but there are specific times in tournaments when you really need to up your intensity and up your focus.

"It might just be that one shot, or two shots, that are so crucial and I think I played those last four holes a little too casually.

"It was too comfortable, four-shot lead, of course it's lovely, but it can evaporate.

"I don't think I did anything really horrible in those four holes but I didn't make any of my par putts from inside 10 feet, apart from on the 17th hole, and to win a tournament you're going to have to make a putt somewhere.

"I've learned from that and it was very different then at the Masters eight months later."

At the 2013 Masters, Scott beat Angel Cabrera in a play-off to become the first Australian winner of that major. "It's funny how these things work out," Scott said. "I'm always going to be the first Aussie to win The Masters and that's something that I'm incredibly proud of."

Now 41, Scott says he cannot wait to tee it up at St Andrews.

"The Open] is the pinnacle of the game. Bobby Jones said it first and [Jack] Nicklaus backed it up. He said the greatest players win at St Andrews and I'm not going to put myself straight in that calibre but I would love to be in that discussion."