The golfing travel guide is a temperamental beast; it tends to go one of two ways. The best examples of the genre transcend their guidebook format and seem to capture golf courses in miniature, making you feel like you’re actually prowling the tracks rather than just reading about them. The worst are either childish picture books or dry as toast fact files, with all the aesthetic appeal of a council legal document. The Golf Lover’s Guide to Scotland, published in August this year by Michael Whitehead, I am pleased to report, finds a third way, blending a native’s local knowledge with tight structuring and a lovely writing style to create an excellent guide to the riches of Scottish golf.

Nuts and bolts first: this is a very well structured guide. Whitehead avoids several of the traps that tend to snare less successful golfing travel guides, namely overloading with details and the flipside of this, not including enough. The 31 courses which are given full profiles – there are summaries of many more – is just the right number to make the guide read like it’s loaded with info, but without running over the brim and becoming oppressive. Neat indexing makes these easy to navigate. There is also a good introduction in the book’s opening pages, packed full of tips such as how much you should tip a caddy (“The amount of gratuity is entirely up to you but around 20 per cent would usually be the minimum starting point”) and reminders to check dress codes (“If you’re planning on dining in the clubhouse before or after your round it’s best to check whether there are any rules on attire before you travel”), adding a nice, practical touch. Add in a very detailed potted history of golf, a sweeping, panorama-like overview of the sport’s legacy in Scotland and a buffer of smart lines such as “Golf can best be described as a patchwork quilt of an experience”, and you have the recipe for a winning intro.

Building on this excellent introduction, The Golf Lover’s Guide to Scotland hits its stride in the main body, where Whitehead surveys the 31 courses picked out in the index with a true golf aficionado’s eye. Writing a guide to the courses of Scotland, the place where golf began, means that Whitehead has particularly fertile territory to explore. And he doesn’t disappoint. All the courses you’d expect to find in such a guide are here (St Andrews, Carnoustie, Turnberry and so on), but the book also unearths a large amount of – if you’ll pardon the critical cliché – ‘hidden gems’ which are less well known. I was particularly taken with the amount of non-links courses which were featured in the guide, and of which, I’m ashamed to say, I was previously ignorant. Despite being known for its seaside layouts, Scotland is also the home of some wonderful inland courses, cut into the Scottish hills or wreathed around great, ancient lochs. The best of these, to my mind, were Comrie, set among the hills of western Perthshire, and Killin, which stands in the shadows of the majestic Glen Lochay. Both of these courses are 9 holes, just some of many 9 and 12 hole tracks which are included in Whitehead’s guide. Guides of this quality can sometimes be sniffy about shorter courses, and it's to The Golf Lover’s Guide to Scotland’s immense credit and value that it gives these their full shrift. 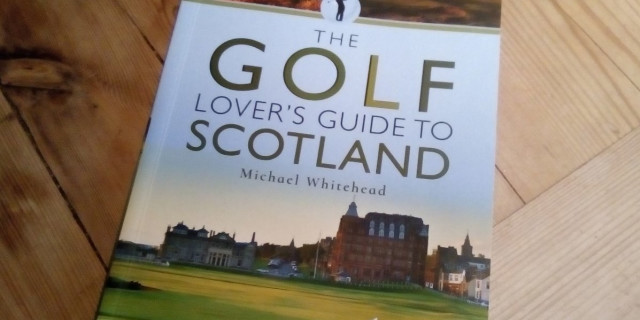 Another inclusion that won my approval was the addition of detailed histories of each club that Whitehead talks about. Not only were these incredibly informative – I learned much from Whitehead’s jaunt through the foundation of St Andrews, for example – but Whitehead hasn’t forgotten his readers and they are also chock-full of fascinating anecdotes and eye-catching nuggets. Giving us the skinny on Castle Stuart’s eponymous castle, Whitehead writes “Legend has it the Earl of Moray challenged someone to stay the night in the three-turret bedroom to prove it was not haunted. A local poacher took up the offer and was found dead in the courtyard the next morning…” In another highlight, an entry on Preswick forms an excuse for a fascinating segue into the history of the Open Championship, of which the course was the very first host.

As you’ve probably gleaned, The Golf Lover’s Guide to Scotland is very well written and treads a deft line between the scholarly and the light-hearted. Fresh metaphors abound, a relative rarity in the sometimes hackneyed arena of sports writing. Nautical comparisons are a particular theme – is Whitehead a sailor as well as a golfer, I wonder? – such as when a slice is described as “going too far over to starboard”. A witty and characterful phrase, this fills me with envy – I wish I had coined it myself!

There are, however, a few problems. Chief among these is the course fact files. As I’ve pointed out, these are highly detailed, but they fall down by failing to include the cost of green fees. Instead of giving exact prices, Whitehead makes the odd decision to list courses in various ‘bands’ – such as ‘up to £99’ and ‘£100-£149’ – which are tied to different coloured circles which are, in turn, put next to the courses. Not only is the lack of detail (generous throughout the rest of the book) frustrating, but it makes it difficult to compare tracks. There is a huge difference between a £20 green fee and a £99 one, which the categories completely exclude. And while this may be more a criticism of my powers of memory than of the book’s layout, constantly flipping back to the key chart to figure out which coloured circle stands for which kind of price band quickly gets tiring.

This though is a venial rather than a cardinal sin, and my overall impression of The Golf Lover’s Guide to Scotland was very positive. Regardless of one or two niggles, I closed the book wanting to hop on a train, travel up to the Auld Grey shores and play golf: you can’t pay a travel book a higher compliment than that.

Bring Me the Head of Sergio Garcia Book Review

Teeing Up the Day Book Review

Four-Iron in the Soul Book Review