As part of a trip to TPC Sawgrass Golfshake ambassador Andrew Picken got the opportunity to play the Stadium Course at TPC Sawgrass as part of a Hole in One Club Competition. 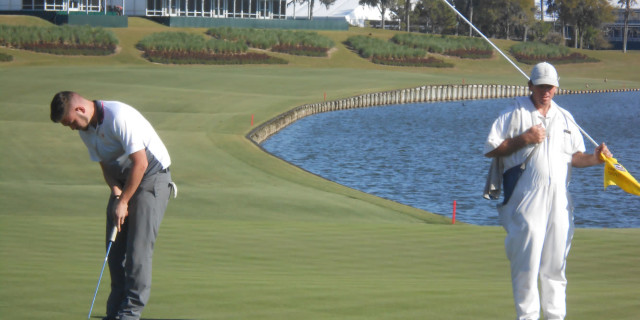 We woke early ready and waiting for The Stadium Course, the final stop on our Hole in One Competition finals.

I was incredibly excited but soon found the nerves had tightened my swing and I was making stupid errors. My son and I were having a wager with our playing partners for the first nine and back nine holes. At the turn we were eight down. We had tried to overpower the course and failed miserably.

I gave myself a talking to and determined to improve both my play and strategy – and it worked.  We both started to play some consistent golf. I don’t intend to describe every hole as there are many videos and course flyovers available for those that are interested. Suffice to say that this element of the course was much more enjoyable as I played much more sensible golf.

As you would expect this round of golf is one that will live long in my memory, and my experience of playing the par-three 17th, the world-famous island hole, was incredible.

The finishing stretch is arguably the most famous on the PGA Tour.

The 16th hole is a par five measuring 523 yards. The drive is over water with a well-positioned bunker on the right. Find the fairway and if you are going for the green in two you need to clear more water and ensure that you don’t go too far, where more water awaits.. If the flag is on the right side of the putting surface it is possible to land your ball to the left and it should feed down to the hole. There is a bunker short right, and another to the left, beside a giant tree. Get it right and you can walk away with an eagle. Get it wrong and a seven, or worse, awaits.

The 17th is the par three that everybody knows. It is measures just 137 yards and is played to an island green. When the flag is at the front of the green is when you will see lots of balls finish in the water – there is usually a swirling wind and if you hit the front of the putting surface with backspin you will probably find a watery grave. There is also a deep pot bunker at the front right. Finish at the back of the green and you face a long downhill putt.

The 18th is a magnificent finishing hole, a par four measuring 462 yards. Water runs all the way down the left side, from the tee to the green. The drive is to a relatively narrow fairway, with a huge slope to the right and trees lying in wait. The green is guarded by a series of humps and hollows and sand on the right, and a bunker and water to the left.

I now have a massive mistake to announce to the world, my worst ever Dad fail.  One of epic proportions.

Alex, my son, asked me to video his tee shot from the wonderful 18th tee. It is one of the bes finishing holes anywhere. I concentrated hard and took the footage using his phone. He hit a stunning drive, leaving a second into the green which finished in the bunker to the left the green. His bunker shot was a beauty, hitting the flag and leaving him with a tap-in.

So you can imagine my horror when we later realised that I had put the phone into selfie mode on the tee and had succeeded only in creating this awful video story. We travel half way round the world for one of the greatest Lad and Dad golfing experiences of our lives and this is what I created.

In my defence I have never taken a selfie so didn’t know what it looked like on the screen when doing so. I have told him to look closely in the reflection in the sunglasses - there is a swing recorded, but it’s just not very clear. I cannot repeat what was said when he realised my error but I have been paying for it ever since!

Did this diminish from one of the best golfing experiences of my life? Slightly, but it was totally worth it to have the chance to walk these fairways in a formal tournament with my son.

The following day Alex returned to his university and we attended Bay Hill to see the Arnold Palmer Invitational, won by Rory McIlroy. This was a brilliant experience. I loved the way it was organised, with a real family feel with children being encouraged to attend. We got close to Tiger Woods and it was incredible to see his impact on the course and gallery.

The Hole in One Experience of a Lifetime

Are Membership Costs Too High And Green Fees Too Low?

Want to Experience The Ryder Cup in 2020?

10 Things Only Tour Pros Use