The four-shot penalty suffered by Matthew Southgate when his ball was knocked off line by a stray leaf did golf no favours at all. It is often said that the rules of the game are hard to understand and, in many instances, utterly ridiculous. Southgate, who was playing for a place on the PGA Tour, struck a short putt and as it left the face of his club a leaf blew across the green, hit the ball and took it offline.

Southgate then walked up to his ball and tapped it into the hole. The rules state that he should have replaced it - because he didn't, he suffered a two-shot penalty. He then signed his scorecard, but because he hadn't given himself that two-shot penalty he was given a further two-shot penalty. But here's the thing - if he had kept his head down when he struck his first putt and hadn't seen the leaf diverting the path of his golf ball then there would have been no penalty imposed. Bonkers.

Here, we take a look at 10 rules infringements.

Thompson completed the third round of the 2017 ANA Inspiration, the season's first women's major, leading the field and was three shots ahead after 12 holes of the final round. All was well in her life, right up to the point where she was walking towards the 13th tee in the final round and was approached by LPGA Tour rules official Sue Witters, who informed her that she was being given a four-shot penalty. The previous day, a TV viewer had seen Thompson replace her ball on a green in the wrong place. Suddenly, her lead had been wiped out and she trailed by a shot. A furious Thompson struggled to fight back the tears but showed what she is made of by recording three birdies to force her way into a playoff with So Yeon Ryu. In a perfect world, Thompson would have won the playoff, but Ryu emerged triumphant. 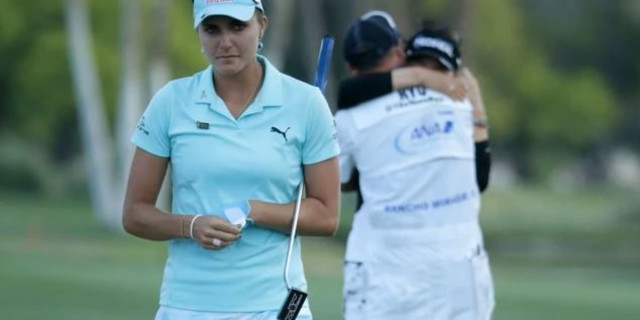 In the final round of the 1997 Players Championship, Davis Love III was on the 17th green, fully focused on his upcoming putt. As he took his practice stroke, the end of his putter-head clipped his ball. Love shook his head in disbelief and continued. He took another practice stroke and holed the ball after two more putts, marking a bogey four on the card. He should have replaced ball and given himself a one-shot penalty. By the time that the PGA Tour's rules officials found out what he had done, Love had already signed his card, and they were left with no option but to disqualify him. It was a mistake that cost Love $105,000.

The Irishman was leading the Benson and Hedges International Open at the Belfry in 2000 when he was disqualified in the most bizarre of circumstances. On the Saturday, he shot a course record 64, which featured eight birdies. The Belfry Hotel had asked the European Tour for the cards of all potential winners of the tournament in order to frame them. When tour staff dug out Harrington's cards they discovered two signatures on his card for the first round - unfortunately, neither of them belonged to the Irishman. As he prepared to begin his final round, Harrington was informed that he had been disqualified.

Mark Roe and playing partner Jesper Parnevik were both disqualified after the third round of The Open at Sandwich in 2003. Their "crime"? They forgot to change scorecards before the start of their round. Roe shot a wonderful 67 and was just three off the lead, heading for easily his best finish in a major, and possibly even victory. To really rub it in, if they had spotted the mistake before signing their cards neither man would have been penalised. Parnevik was distraught. "I think it's really, really dumb," said the Swede. "I feel so bad for Mark. They are so thorough here. We were given the all-clear to leave the scoer's hut. Of course it is our fault, but I can't believe the R&A didn't catch it in time." Roe was more philosophical. "Rules are rules and they are there to protect the game. I am not bigger than the game," he said.

Woods hit a glorious approach to the 15th hole at The Masters in 2013 and looked on in horror as the ball struck the flag and rebounded into Rae's Creek. Woods dropped a ball and played the shot again. All well and good, except for the fact that he dropped the ball in the wrong place, and did so deliberately.  The rules committee had looked at the drop on TV while Woods was still playing, and deemed it to be fair, but after his round Woods told a TV reporter that he deliberately moved the ball two yards further back in order to have a better distance into the green. There is a suspicion that had it been any other player there would have been an automatic disqualification for signing an incorrect scorecard. Instead, Woods received a retrospective two-shot penalty.

The Dustinator came to the final hole at the 2010 PGA Championship at Whistling Straits with his first major within his grasp. Now the thing that marks out Whistling Straits from most other courses is that the vast areas of waste land are actually classed as bunkers, and Johnson clearly grounded his club at the 72nd hole. He probably wasn't the only one to do so, but he was the only one to do so under the gaze of the cameras and as he finished the hole he was informed that he had been penalised two shots, which meant that he missed out on the playoff.

Stadler finished second at the Andy Williams Open in 1987 - or he thought he had, right up until the moment he was informed that he was being disqualified. Why? At the 13th hole during the third round, The Walrus found his ball in a muddy lie under a tree. He decided that the only way he could play the shot was to get down on his knees. He was wearing a pair of light-coloured trousers and didn't want to get them dirty so he placed a towel on the ground and then played his recovery shot. The problem with this is that it infringed the rules because it was classed as building up his stance. He should have been penalised the ubiquitous two shots but signed his card and was disqualified after completing all 72 holes.

We have all done this, but not with the eyes of the world upon us. Lee Janzen was competing in the NEC Invitational in 1998 and hit a putt that hung on the edge of the hole. Janzen and playing partner Vijay Singh took a look and were convinced that the ball was still moving. So Janzen waited. And waited. Eventually, the ball fell into the hole and Janzen thought he had birdied it. But TV viewers called in and claimed that Janzen had breached the 10-second rule and should actually have signed for a five. The double US Open champion was disqualified, with the money he lost costing him his place in that year's Presidents Cup team. He eventually made the side, but only after Hal Sutton withdrew.

Dyson was playing in the Shanghai Masters in 2013 when he found himself lining up a putt. Between his ball and the hole was a spike mark. One of the peculiarities of professional golf is that it is fine to repair a pitchmark but it is against the rules to do the same with a spike mark, even though this is something that has been created by another player. Dyson walked up to the spike mark and tapped it down. Unfortunately for him, the TV cameras were on him at the time and the European Tour were inundated with phone calls. Dyson, who is one of the most unassuming and genuine characters on the European Tour, was subjected to a three-man disciplinary panel who decided that his actions were deliberate but then added: "It was a momentary aberration on his part, not a premeditated act of cheating." He was banned for two months and fined £30,000.

Oh Monty. It was 2004 and Colin Montgomerie was taking part in the Indonesian Open. His world ranking was on the slide and the Scot needed a good finish to secure his place in the top 50 in the world rankings and a place in the Players Championship. He hit his drive at the 14th into a bunker, leaving himself a dreadful stance. As he was trying to figure out how to escape the sand, the heavens opened and play was abandoned for the day. When Monty returned the next day he found that the rain had washed away his ball. This meant that he had to replace it as close to where it originally lay as possible. He supposedly did so but, miraculously, he now had a good stance and was able to play a proper recovery shot with his feet outside the bunker. There were complaints from TV viewers and Soren Kjeldsen, his playing partner, and Monty donated his prize money to charity. It was decided that he didn't break any rules, so why would he give his prize money away? Some weeks later he was hauled before the tour's players committee, who made it perfectly clear that they thought he had broken the rules.