Scotland's historic Montrose Golf Links has unveiled plans to rename its Medal Course, which is one of the oldest layouts in the world. Soon to be known as the 1562 Course, this is all part of an initiative to raise awareness of the club's significant role in the development of the game.

The rebranding exercise will be the first time the course has gone through such a process and will be completed during the 2018 season when the world’s oldest major; the Open Championship, returns to the Angus region. The historic change will also be accompanied by a number of exciting initiatives designed to celebrate 450 years of golf at the two-times Open Championship Final Qualifying venue.

Jason Boyd, PGA Professional and Operations Manager at Montrose Golf Links, described the launch of the 1562 Course as an exciting and positive move. “We don’t make enough of the fact that golf was first recorded in Montrose in 1562,” said Boyd who spearheaded the idea. “The name change will give even more credibility to our golf offering and by doing so will open up new doors. Bringing 1562 to the fore will make a huge difference. It’s the most important aspect we have and it is our biggest marketing strength - we need to make as much of it as we can.”

The renaissance of the Montrose course, which hosted the PGA EuroPro Tour’s Eagle Orchid Scottish Masters in June, will be unveiled through a series of events and announcements leading up to the formal relaunch at the start of the golfing season. The idea to rename the fifth oldest golf course in the world certainly breaks with convention and is believed to be unprecedented in modern times. 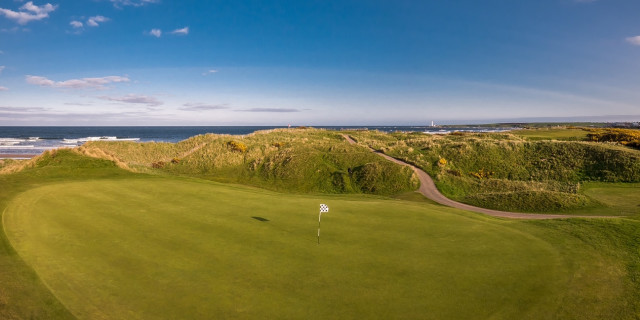 “This is a fairly bold move, especially in the world of golf,” noted Boyd. “Courses that have been around for 450 years don’t often receive makeovers like this, but we feel assigning the date to the course name clearly illustrates the extraordinary golfing heritage that exists here as well as the significance of Montrose in terms of the development of the game.”

The stunning east coast course, which features seven spectacular cliff-face holes and regularly appears in the most prestigious golf rankings, has been shaped by some of the foremost names in golf including Willie Park Jr, Old Tom Morris and Harry Colt. Indeed, with over four centuries of golf under its belt, the current layout has a classic feel and is widely regarded as one of the most natural links layouts in Scotland.

“It’s very natural. It has stuck to the same layout for more than 100 years,” said Boyd. “Changing the name gives us an opportunity to raise awareness of the course and reach out to a wider audience. As soon as you mention 1562, you open doors that haven’t have been open to us until now. Golfers realise the significance of dates in golf and they know how important they are. The fact we are celebrating the fabulous golfing heritage that is synonymous with Montrose will only serve to attract more people to visit this unique place and play one of the oldest courses in the world for themselves.”

Montrose Golf Links features two traditional links courses; The Medal and The Broomfield and is located a 30-minute drive from Carnoustie – host of the 147th Open Championship – and 1 ½-hrs drive from St Andrews.