ALL eyes will be on Masters champion Danny Willett as he attempts to win the European Tour's flagship tournament, the BMW PGA Championship, at Wentworth.

Unsurprisingly, the tournament has attracted an all-star field, with the notable exception of Rory McIlroy, the 2014 champion, whose absence from European Tour headquarters is puzzling, not least because this is a man who needs to win a big tournament for the sake of his confidence and self-belief.

He played in the Wells Fargo championship, the Players Championship and the Irish Open but has made it clear he does not want to play in four successive tournaments, so Wentworth will take a back seat. He will, however, be back in action at the Memorial Tournament as he prepares for the US Open.

In another grevious blow to the organisers, Justin Rose has withdrawn, citing a back injury. As a potential winner at Wentworth, he will be missed by fans and sponsors alike, but his rivals will not be sorry that he is staying at home.

All right, so that takes care of who will not be there. In McIlroy's absence, we can look forward to another fabulous four days. Willett appears to have grown in stature since his fabulous victory at Augusta. He missed the cut at Sawgrass but that was hardly surprising since he had taken a few weeks off to get used to be a new father and to his new stature as a major champion.

Willett has been working hard on his game and it would be no surprise to see him pick up the tour's top domestic title. It also goes without saying that he would be a popular winner - Willett is made of the right stuff.

Like Manassero, Donald has endured a miserable run of form over the past couple of years. Unlike the Italian, however, Donald has finally showed signs of recovery this year. He nearly won the RBS Heritage at Harbour Town a few weeks ago and is sure to have plenty of good, positive vibes about returning to Wentworth. A good performance here could turn everything around for Donald, and there would be few more popular winners.

Russell Knox, of Scotland, could be forgiven for still feeling a little shellshocked after the nine shots he took at the 17th hole at Sawgrass during the Players Championship. In less than five minutes, he went from contender to also ran, but showed what he is made of by hamming it up with the gallery after holing his final putt. Knox is a very talented golfer. Wentworth calls for a champion who can shape the ball and can putt well - there are few better at both than Knox, who came so close to winning the Irish Open last week. Shane Lowry comes from the same mould and will be especially keen to do well after a disappointing performance at the Irish Open. 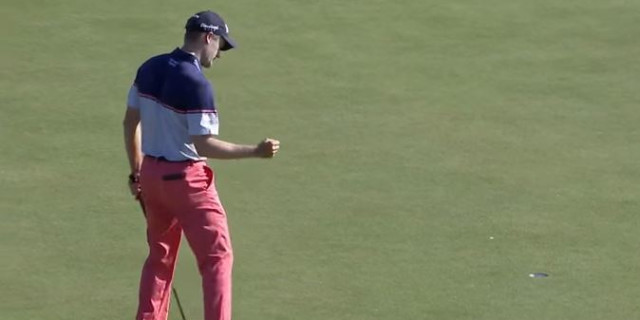 In truth, any one of about 80 players in this field could win, but the champion is most likely to be an established star - and that means that last year's winner An could contend once more. Nobody predicted that he would finish on top 12 months ago but he took the event by the scruff of the neck and won by six shots. His fine form has continued this season, losing out in a playoff at the Zurich Classic of New Orleans.

Lee Westwood arrives in Surrey with a point to prove. He finished second at The Masters and also played some fine golf in Ireland to climb back up the world rankings and is determined to demonstrate that it was not a flash in the pan. This is a Ryder Cup year, and Westwood wants to earn automatic selection to Darren Clarke's European team. He would be the first to admit that he is in the autumn of his career but the Englishman still has some big performances in the locker, and I will be looking for another big week.

Rafa Cabrera Bello is enjoying a fabulous season. His worst finish of 2016 is a tie for 36th in Malaysia. He has twice finished runner-up (at the Dubai Desert Classic and Qatar Masters), was third in the WGC Dell-Matchplay and tied 17th at Augusta. The Spaniard has found a level of consistency that has been missing from his game and I will be astonished if he is not in contention on Sunday.

Rafa Cabrera Bello. In the form of his life

Francesco Molinari. The best iron player in the field

Lee Westwood. Will surely rise to the occasion

Francesco Molinari. Should be inspired by return to Europe

Shane Lowry. Will be hoping for some wind

Matthew Fitzpatrick. The next big thing

Luke Donald. Could complete his return to form here

Ben An. Returns to scene of his biggest and best week