It's Jason's Day Again As He Coasts To Players Championship Victory

THIS was meant to be the dawning of a new era, of a new Big Three. Well, right now, we are in awe of The Big One, and that man is Jason Day, who strolled to victory in the Players Championship at Sawgrass without breaking sweat.

The Australian was 15 under par after the first 36 holes and finished the week on that same total after a final round of 71. to collect the winner's cheque for $2m. And check this out - he hit a two iron from the tee at the 72nd hole, and the ball travelled 308 yards.

"This is a big accomplishment for me," Day said. "To go wire to wire is something special. I played really solid golf, sticking to the things I have worked on. It is great to convert another one, and now I can look forward to the next one." 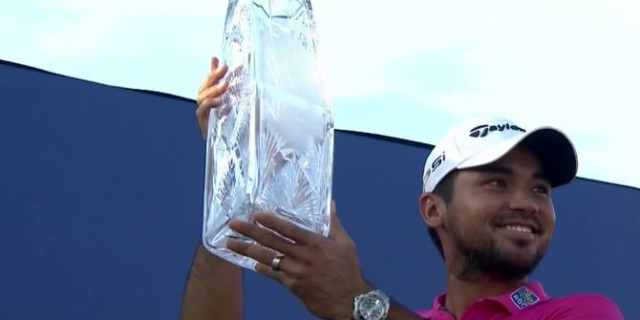 We watched Jordan Spieth in disbelief last year as he rolled home putt after putt of all lengths. We thought he was a freak, that it was a one-season wonder and that nobody could ever putt that well again. We were wrong. Not only does Day hit the ball miles, not only does he rifle one iron shot after another at the flag but he has also become the best putter in the game.

His all-round game in winning The Players was in a different league to every other player in the field. Spieth missed the cut and McIlroy's putter was stone cold again. McIlroy finished the week seven under par, which is a measure of how good the rest of his golf was.

If Rory is to close the gap on Day in the world rankings and regain top spot then he has to find a way to get the ball into the hole. Right now, the Australian is in a class by himself. This was his eighth victory since February last year and he is now opening a gap at the top of the world rankings that is reminiscent of Tiger Woods in his prime. 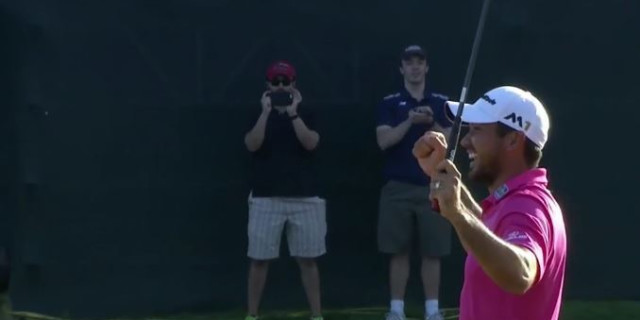 He does have a weakness - he came into this tournament ranked 161st in driving accuracy on the PGA Tour, but when you do everything else as well as this man does that is something you can just shrug off. At he 14th, for instance, he hit the ball way right and found a horrible lie but was somehow able to muscle the ball to the green and two-putt for a par.

Day, who began the day with a four-shot lead, gave some hope to the field with bogeys at the sixth and eighth holes but nobody was able to take advantage, to string a few birdies together and put him under pressure. And he stormed back with birdies at the 10th and 12th holes to regain control.

Matt Kuchar briefly threatened but had to settle for a 68 and a 10-under-par total of 278, tied with Justin Thomas, who produced a best-of-the-day 65 that was all too little, too late. The veteran Ken Duke made progress early on, thanks mainly to a red-hot putter, but like so many other challengers, the 47-year-old ran out of steam.

Colt Knost, who barely made the cut, birdied four holes on the front nine and also picked up shots at the 12th and 14th holes. Sadly, there was a double-bogey at the fifth and another dropped shot at the 13th. He walked to the 18th tee on 10 under, needing a birdie to move into second place on his own. Instead, he flared his tee shot way right and did well to par the hole. 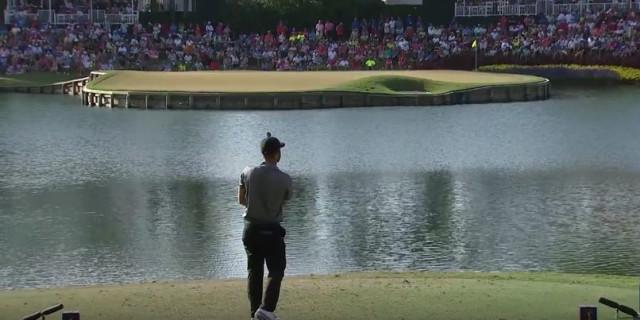 Kevin Chappell has enjoyed a solid season and played well for all four days at Sawgrass. He mixed birdies with bogeys until he came to the par-five 11th, where he recorded an eagle that took him to nine under. A magnificent approach to the 16th gave him an opportunity to record another eagle, but the ball slipped by the hole. It was that kind of day for the challengers,

The 17th is one of the most famous par threes in golf. It measures just 129 yards but the green is, of course, an island, with water waiting to claim any wayward shot. Chappell took dead aim and finished eight feet from the hole. If he could hole the putt he might put some pressure on Day. He duly converted and grabbed second on his own at 11 under. Chappell then split the 18th fairway and rifled his approach to 10 feet but he missed the putt - second place on his own was consolation enough for the American.

Playing with Chappell was the admirable Italian, Francesco Molinari, whose chance went with a double-bogey from nowhere at the 14th, taking him from 10 under back to eight under. He bounced back with a birdie at the 16th and then parred the last two holes to finish in a tie for seventh place, the top European. 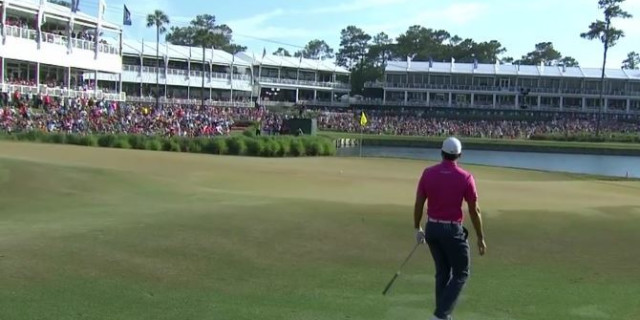 While all of this was going on, Day nearly holed his chip at the 16th for an eagle, but a birdie took his lead back to four once again as he moved back to 15 under par. All he had to do was safely negotiate the 17th - 24 hours earlier, Russell Knox took NINE on the same hole. He didn't hit a great shot, but it found the green, albeit a long way from the pin, and duly two-putted for another par.

Jeunghun Wang, of South Korea, created a piece of history when he won the AfrAsia Bank Mauritius Open to add to the Trophee Hassan II title he won in Morocco last week - he thus became the first Asian golfer to record back-to-back wins on the European Tour.

But Wang would be the first to admit that he had no business winning the tournament. He began the day one shot behind Siddikur Rahman, of Bangladesh and before they reached the turn, Siddikur had extended that lead to four shots and was cruising as all around the pair quickly tumbled down the leaderboard.

Siddikur is one of the shortest hitters in professional golf - he played the final round with Wang and the big-hitting Belgian Nicolas Colsaerts and was frequently some 80-90 yards behind them from the tee. But Colsaerts played some wild golf and was soon out of contention. Siddikur just kept hitting fairways and greens, reeling off the pars and recording the occasional birdie. 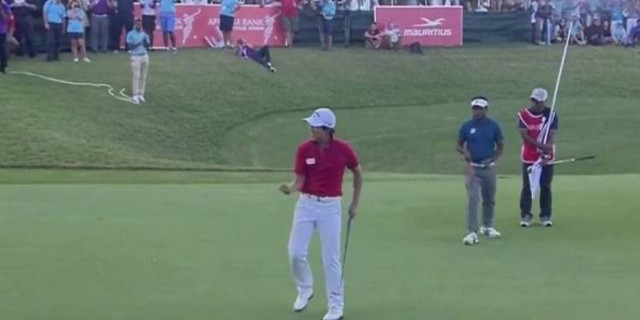 And when he came to the 16th tee with a three-shot lead he must have thought that he was home and dry, but he dropped three shots in two holes to leave him tied with Wang on five under par going up the final hole. A birdie for Wang after a brilliant bunker shot sealed a one-shot victory for the South Korean, just seven days after he had won his maiden title in Morocco.

The 20-year-old required a birdie on the last at Royal Golf Dar Es Salam to get into a playoff last week and when Siddikur missed his effort after an excellent chip which hit the pin, another birdie was enough to hand Wang a triumph in the Indian Ocean. 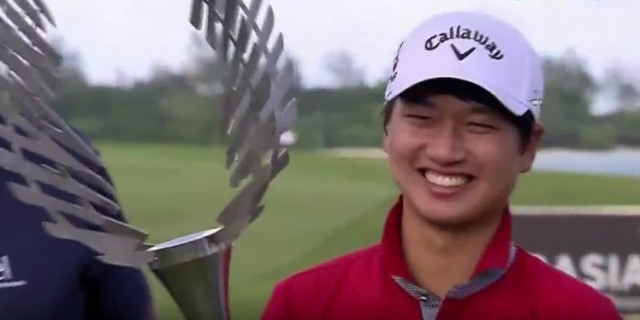 And now his sights are set on even bigger and better things, starting with the Irish Open at the K Club this coming week. "I hope I can win three in a row, but next week is a really big tournament and it's my first time in Ireland, so I'm not sure. I'll be trying my best," he said. "I probably had luck on my side today. I wasn't even thinking about winning this week until the 16th. I missed a lot of putts so I thought I didn't have any chance to win.

Wang and Siddikur were the only players to finish under par after a tough week for scoring at Four Seasons Golf Club at Anahita, with Nicolas Colsaerts and Estanislao Goya at level par, a shot clear of Andrew Dodt - who had been 10 under par midway through the third round before a spectacular loss of form. 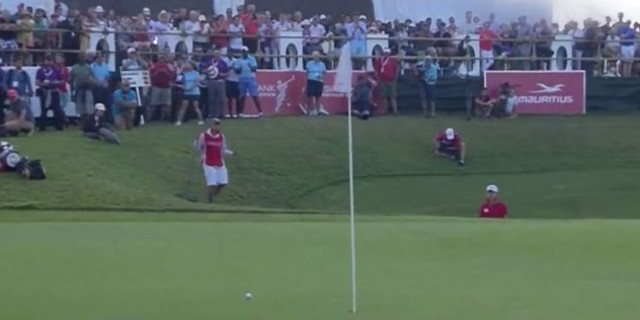 Both men made early bogeys but a beautiful tee-shot on the par three fifth handed the Bangladeshi a birdie and when he put his approach to the sixth to 18 feet and holed an excellent putt, it looked like there could only be one winner. Wang needed three shots to find the green after his tee-shot ended up on an awkward slope and when he missed his par putt, the two-shot swing put Siddikur firmly in control.

Wang then used his length advantage over Siddikur to drive over the ninth green and make a birdie and when the latter missed a short putt on the 12th, the pressure was building for the last six holes.

A three-putt bogey from Wang followed on the 14th but Siddikur lost his ball off the 16th tee and a double-bogey followed before a three-putt on the 17th set up the late drama. 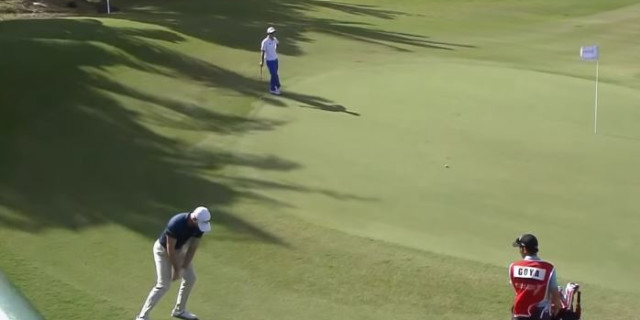 Argentina's Goya birdied the 15th and the last to sign for a 71 and move up into third. Colsaerts signed for a 75 which contained an eagle and three double-bogeys while Dodt's 76 left him a shot clear of Brandon Stone.