Rory and Sergio make it a Double for Europe

THEY came out in their tens of thousands to cheer Rory McIlroy home to the Irish Open. And he didn't disappoint them, winning at the K Club after striking one of the best fairway woods you will ever see to the final green. It is his first victory in six months and was exactly what the fans, the European Tour and the sponsors wanted to see. More to the point, it was a reminder to Jason Day that he is not going to have things his own way at the top of the world rankings.

With three holes to play, he trailed Russell Knox, of Scotland, by a shot, but produced two unbelievable blows at the 16th and 18th holes to remind us why he has won four majors. The victory meant a huge amount to McIlroy, who struggled to hold back the tears after tapping in for an eagle three at the 18th for a final round of 69 and a winning total of 12 under par, three ahead of Knox and Bradley Dredge. 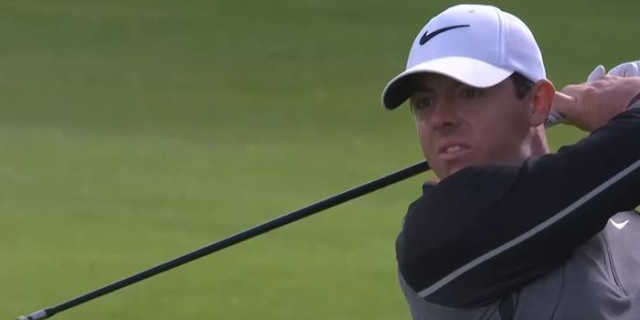 As an added bonus, McIlroy's foundation will benefit substantially - as the tournament host, he will be donating his prize money to that foundation. This performance will send out a warning to his rivals. It is the first time this year that he has put four good rounds together, and the good news is that he negotiated a golf course riddled with water and trees without a single double-bogey. Over the four rounds, he had just six bogeys.

This is a magnificent golf tournament but, not for the first time, the weather played its part. Torrential rain fell on the K Club during the final two days of this event, leaving puddles all over the place. In truth, the greenkeepers did a wonderful job in keeping the course playable, but if ever a tournament - and its supporters - deserved four days of glorious weather, it is this one.

McIlroy was one of a number of players who had to return to the course yesterday to complete their third rounds - when play was called off on Saturday, he had three holes left to play and was three shots ahead of Danny Willett, the Masters champion. He had two par fives left, the 16th and 18th, and must have fancied his chances of extending his lead, but he finished with three pars and began the final round on nine under par. 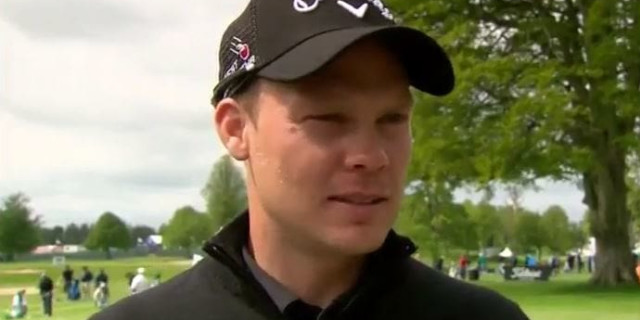 Knox began the final round four adrift of the Northern Irishman, surely with no chance of catching him. But the Scot grew up playing the game in Inverness. In other words, he is at home in wet conditions. And he produced some sensational golf. It began with an eagle at the par-five fourth and was followed by a birdie at the fifth. He dropped a shot at the sixth but a birdie two at the eighth helped him reach the turn in 32.

The Scot still wasn't finished. He birdied the 14th and 15th, and with McIlroy mixing two birdies with two dropped shots, Knox went to the 16th on 10 under par, one ahead of the local hero.

The 16th is a par five measuring 570 yards. Knox hit his drive out of position and was unable to go for the green in two, but McIlroy found the fairway and rifled a three wood 270 yards to the heart of the green. Knox reached the green in three but then three-putted and with McIlroy making a birdie four, suddenly the Northern Irishman was back in front on 10 under.

He then hit a glorious iron to the middle of the 17th fairway and hit his approach to eight feet. A birdie would give him a two-shot lead heading to the par-five 18th hole, and the opportunity to enjoy his walk down the final fairway. McIlroy struck a perfect putt but it lipped out and he had to settle for a par.

Up ahead, Bradley Dredge, of Wales, found the 18th green in two and had an eagle putt to draw level with McIlroy, but he left the ball inches short. A final round of 66 saw him finish the week on nine under par.

So McIlroy and Knox boarded the tee at the 527-yard 18th, with the Scot knowing he needed to better his rival by a shot to force a playoff. McIlroy found the fairway, while Knox hit his drive into a fairway bunker on the right, ruling out any chance of him reaching the green in two. McIlroy secured the title with a five wood from 255 yards that soared across the lake in front of the green and came to rest two feet from the hole to set up an eagle. What a way to win.

And in an act of sheer class, the first man to congratulate him was Knox.

The most heartwarming story of the day was provided by Matthew Southgate, of England. He finished with a 68, securing fourth place on his own, good enough to know that he will keep his tour card. Southgate has suffered some horrendous health problems in recent times. He is one of the nicest men on the European Tour and nobody will begrudge him a performance that proves he is back to full health. It was also enough to ensure his place in the field at the BMW PGA championship at Wentworth. Good things can happen to good people.

Willett had a day to forget. Playing with McIlroy and Knox in the final group of the day, the Yorkshireman recorded a 77 to add to his third round of 74. While McIlroy will now take a week off, Willett heads to Wentworth, and don't be at all surprised to see him bounce back with a win.

"It is difficult to sum up what this means to me," McIlroy said. "To play like that and finish the way I did in front of my home fans and friends was very, very special and I struggled to keep the tears away. I was trying to stay as relaxed as I possibly could, and even when Russell birdied the 14th and 15th I still felt I had a chance.

"I have to tell you that I had shivers down my spine with the way the crowd reacted to my shot at the 18th and the way they cheered me all the way home. I can't wait for the rest of the summer now."

Meanwhile on the PGA Tour, reports of Jordan Spieth's recovery at the Byron Nelson Classic proved to be premature as the world number two stumbled to a final round of 74 during which he hit just four fairways. The most worrying aspect of his performance for his legion of fans was not the fact that he played poorly - and he most certainly did - but that his struggles are clearly getting to his head. As one mistake followed another, Spieth was steaming, angry with himself, his caddie, the course and his game.

The tournament was won by Sergio Garcia, who beat Brooks Koepka in a sudden death playoff after the American hit his drive into the water at the first extra hole. It was Garcia's ninth victory on the PGA Tour, equalling the record of Seve Ballesteros, and it secures his place in Europe's Ryder Cup team. It is the second time that the Spaniard has won this famous old tournament, but his first since 2012, and he did so despite putting two balls in the water during his final round. 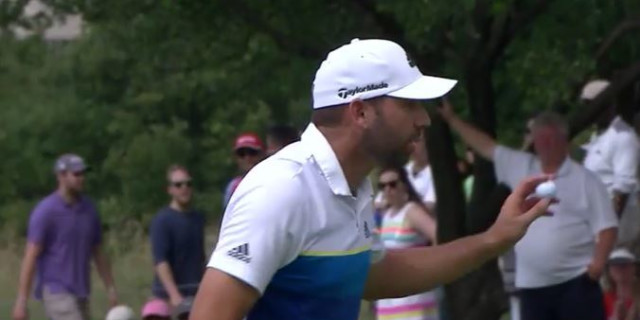 Spieth began the final day two behind Koepka and with every chance of getting his year back on track after failing to win The Masters and struggling at the Players Championship, but he missed far too many fairways and bogeys at the third, fifth and eighth ended his challenge. After 14 holes, Koepka had mixed two birdies with two dropped shots and would have been surprised to find himself still leading by a stroke at 16 under par. 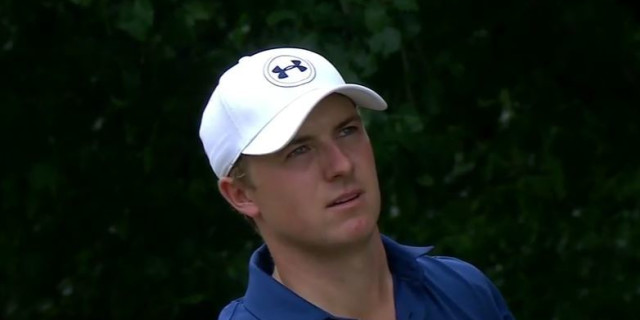 Koepka hit a glorious drive at the 15th but missed the green with his approach and took three more to get down. He walked off the green tied with Garcia. The Spaniard dropped shots at the second, fourth, 10th and 14th, but in a rollercoaster of a round, he also picked up birdies at the first, fifth, sixth, seventh,13th and 16th, and when he put his tee shot 12 feet from the hole at the par three 17th it looked like he would pick up another birdie to take the lead, but he left the ball hanging on the lip.

Matt Kuchar began the day on 13 under and dropped a shot at the very first hole. By the time he reached the 17th he had moved to 14 under, trailing Garcia and Koepka by one. Koepka's trials and tribulations continued on the 16th, a par five. He hit a huge drive but then flared his second shot miles right before dumping his third into a greenside bunker. In the end, he did well to escape with a par and remain tied with Garcia.

Up ahead, Garcia followed a glorious drive with a wedge to 10 feet. If he holed it, the title was surely his, but it trickled beyond the hole and he had to settle for a par, a round of 68 and a 72-hole total of 265. Would it be good enough?

Koepka found the green at the 17th but was a long way from the hole and was delighted to walk off with a par. Another good drive at the 18th was followed by an approach to 20 feet and when he was unable to hole the putt it meant that he and Garcia were heading for extra holes. 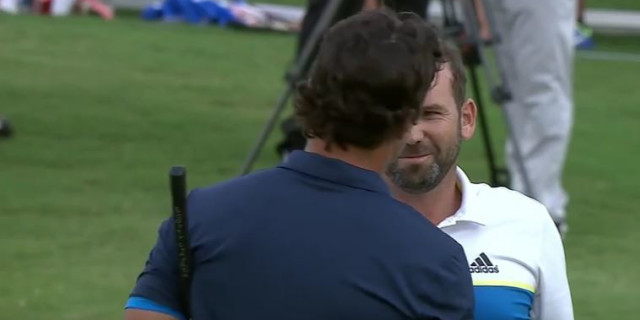 Kuchar was unable to birdie the 18th and finished third for the second successive week.

There was some spectacular scoring but it came from players who were too far adrift at the start of the day. Colt Knost fired a magnificent round of 65 to join a logjam on 13 under par, Jimmy Walker returned to form with a 63 and Charley Hoffman shot a 64.