DANNY WILLETT is the Masters champion. Let me repeat that - Danny Willett, of Sheffield, is the Masters champion. On an unbelievable final day at Augusta National, Jordan Spieth threw away a five-shot lead with nine holes to play as he came to grief in spectacular fashion at the par-three 12 hole and Willett produced the round of golf of his life to win his first major.

Spieth was on cruise control until he came to the 10th hole. He dropped a shot there and another at the 11th. But he still seemed to have the tournament within his grasp until the par-three 12th, where he took a soul-destroying seven. As all around him were losing their heads, Willett, aged 28, kept his to become the first English winner since Nick Faldo in 1996. His final round of 67 gave him a five-under-par winning total of 283. 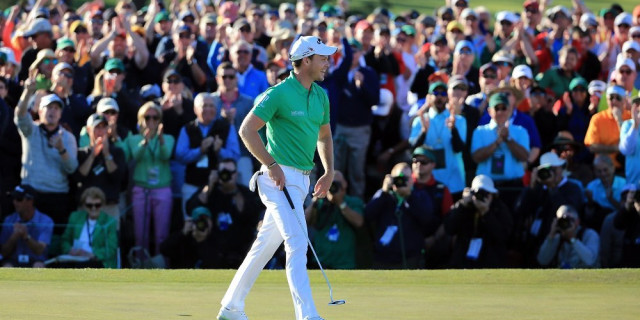 "There is no better feeling," Willett said. "When I realised Spieth had dropped four shots at the 12th I had to keep my composure and focus on my own game. My wife was born 28 years ago today and my son, Zach, was due to be born today but came early. Maybe it was fate." Willett had actually stated that had his son not been born before this week then he wouldn't have played. Fate, indeed.

Before he started his final round, Spieth spent time on the range with his coach, Cameron McCormick, because he wasn't happy with his swing. If anybody was going to challenge Spieth they were going to have to make a fast start and get some early birdies on the board. Conditions were at their most benign of the entire week with only a gentle breeze, but the greens were like glass. Yet again, this was a day for survival - anybody who could negotiate Augusta National in level par would be guaranteed to progress through the field.

But the only man who looked to have Augusta under control was Spieth, who birdied the second to move to four under par. But he quickly gave that shot back before birdies at the sixth and seventh. At five under he led by three.

Lee Westwood birdied three holes towards the end of the front nine to get out in 34 and reach one under par. He was playing with Willett, who also reached the turn in 34 and moved to two under par,in second place all on his own. The Sheffield golfer looks increasingly comfortable at this level. He finished joint sixth at The Open last year and is clearly bursting with confidence and self-belief.

It was a struggle for Jason Day, the world number one. He was playing with Dustin Johnson, whose challenged was derailed with an early double-bogey but he came back with three birdies to reach the turn in one under.

Westwood dropped a shot at the 10th, just as Spieth was getting up and down for yet another birdie at the eighth to increase his lead over Willett to four. And if there was any doubt about Spieth winning his second successive Green Jacket it evaporated when he had his fourth successive birdie at the ninth, reaching the turn in 32.

It was a good day for the English contingent. Paul Casey began the day four over par, seven shots behind Spieth. He birdied the second, seventh, 13th and 15th to move back to level par. If he could pick up another couple of strokes he would set a very stiff target, but he promptly put his tee shot at the 16th into the bunker. He nearly holed his recovery shot and finished the round with a birdie, a round of 67 and a one-under-par total. Matthew Fitzpatrick birdied four of the last five holes for another round of 67. He finished on level par.

Spieth proved he was human when he dropped a shot at the 10th and found his lead cut to three when Willett birdied the par-five 13th. Johnson had a terrific chance to move to three under at the same hole but left a 10-foot eagle putt short of the hole. Up ahead, Willett rifled his approach to the 14th to three feet and holed the putt for a birdie to go four under.

Moments later, Spieth bogeyed the 11th hole and, incredibly, his lead was down to a solitary stroke. He came to the treacherous par-three 12th and promptly dumped his tee-shot in the water. He then duffed his next shot into the water as well and then hit his fifth shot into the bunker behind the green. He walked off the hole with a seven, was back to level par and Willett led The Masters by one shot from Lee Westwood who holed his pitch for an eagle at the 15th.

Two pars to finish would almost certainly get the job done for Willett and he got the first one after a fabulous chip at the 17th, And so he came to the most important drive of his life, finding the fairway with a glorious three wood. He struck his second to 15 feet. His first putt was tentative but he secured his par and round of 67 he will remember for the rest of his days.

Westwood parred the last for a round of 69 and Johnson's challenge ended when he three-putted the 17th. Spieth still wasn't finished and when he birdied the 15th it took him to three under, two behind Willett with three to play. He then hit a spectacular shot at the 16th, leaving himself with a four-foot putt for birdie but this time he couldn't hole it. He had to birdie the final two holes to force a playoff. His challenge ended when he bunkered his approach at the 17th.

Justin Rose has had his struggles this week, but he found his best on this final round. Having started the day three over par, he was one under coming off the 16th. A stroke went at the 17th and another at the last.

And there was a notable performance, too, by the Dane, Soren Kjeldsen, who began the day one over and got himself into red figures before a couple of late dropped shots.

Sadly, there was no fairytale ending for 58-year-old Bernhard Langer. He began the day just two off the lead but dropped a shot at the first and went backwards from that point onwards. And Smylie Kaufman, who was in the final group with Spieth, played well enough but could get nothing to drop and it seemed that every time he put his ball in the wrong place it cost him a shot.

What of Rory McIlroy? He had three birdies on the front nine, but he also had three bogeys and then dropped another at the 11th and eventually finished in 71.

Bryson DeChambaeu won the amateur prize, finishing on five over par after a round of 72. It was his final round as an amateur but we will definitely see him back here. Davis Love III, the US Ryder Cup captain, finished with a 77 that included a hole in one at the 16th. Louis Oosthuizen aced the same hole after his ball bounced off the ball of playing partner JB Holmes.