Following on from his incredible success last year, what can we expect from Jordan Spieth in 2016?

Jason Day, Marc Leishman, Louis Oosthuizen and Zach Johnson. Two Australians, a South African and an American. But what do they all have in common? They were the only players who managed to finish higher than Jordan Spieth in a major championship during 2015, which is sheer testament to an extraordinary season that transformed an impressive rookie from Texas into a golfing superstar who was ultimately only four shots away from completing the coveted Grand Slam.

For an intoxicating moment during the Monday finish at the iconic Old Course of St. Andrews, the 22-year-old had us believing that the improbable was going to become a reality. Holing a lengthy putt across the 16th green to electrify a massed gallery, the young man who carried the weight of history on his shoulders was astonishingly tied for the lead with just two holes of the 144th Open Championship remaining. 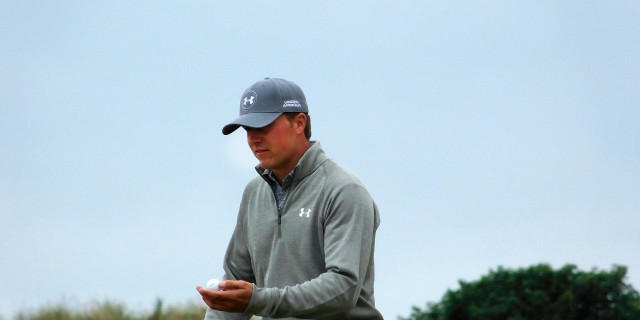 However, a bogey on the fearsome Road Hole and a meekly underplayed approach to the final green crushed those dreams of sporting history, denying the Dallas native a third consecutive major championship, following his domination of the Masters at Augusta National and a hard-fought U.S. Open triumph on the uncooperative and somewhat cartoonish layout of Chambers Bay that could have been designed by Quentin Tarantino.

Digesting that bitter final round disappointment would be a test of a mentality that had impressed most observers, with Spieth being able to shrug it off a few weeks later at Whistling Straits, producing a thrilling head-to-head contest with the 27-year-old Day, who himself had seen the Claret Jug narrowly evading his grasp just a month after overcoming an on-course health scare.

Three shots would ultimately separate them, with the likeable Queenslander producing a blisteringly assured display of power to clinch his first major title in the Wisconsin sunshine. It was a milestone that brought tears of fulfilment to the eyes of the Australian, but reflections were equally shared with the runner-up, who had completed four indelible chapters of major championship golf.

Soon after, having missed the cut in both of the opening two legs of the FedEx Cup Playoffs, it appeared that Spieth had finally run out of steam after a stunningly consistent run of form that had begun during the previous November in Australia, where a brilliant final round of 63 saw him take the title in scintillating fashion. He never looked back from that week in the Southern Hemisphere, though he was certainly overshadowed by the form of Day throughout August.

There was even some audible talk that the Ohio resident had an opportunity to usurp Spieth as Player of the Year on the PGA Tour. However, when it mattered most of all, the double major champion appeared rejuvenated at the Tour Championship, winning the last event of the season to silence any speculation and in turn securing the eye-watering bonus of $10,000,000.

All of that success has led to a man in his early twenties being in the remarkable situation of having already completed what would go down for even the most ambitious professional golfer as a career season. The second youngest ever winner of the Masters, the youngest U.S. Open champion since Bobby Jones in 1923, and the fourth-youngest multiple major holder in history. How do you follow that?

That is the question Spieth will have considered during a much-needed month away from the game. Having been caught up in the never-ending cycle of hotels and tournaments throughout that incredible run, this has been the first period of opportunity he has been afforded to reflect on what happened. In a sense, having been removed from the bubble of competitive golf, it will have become a reality.

Would rather this year not end...

Setting such lofty standards will lead to heightened expectations, not just from the media and fans, but also from the player himself. He is no longer seeking a breakthrough on tour, or to win a major or even to become number one in the world, but to consolidate that position he has established for himself. It is a new dynamic to be processed.

What is most exceptional about Spieth is that there is not an individual aspect of his game that necessarily distinguishes itself from the rest.  Many will understandably point to his prowess on the greens, particularly from middle-distance during key moments of major championships, but that only tells part of the story. If his success was simply down to putting, which it wasn’t, then we would instead now be talking about Aaron Baddeley or Jimmy Walker as the world number one.

Compared to the likes of Rory or Dustin Johnson, Spieth isn’t a long driver of the ball, but he hits it far enough to compete with those players. In terms of pure striking and iron play, he is not quite at the level of Henrik Stenson or Bubba Watson, but isn’t an unsurpassable distance away from them. His short game wasn’t even as effective as Kevin Na’s during the year, but it was better than most.

Ultimately, the successful formula was that every aspect of his game was of a consistently high standard. That is best illustrated by the fact Spieth that was the only player on tour to finish 2015 inside the top 15 on each of the strokes-gained statistical categories: Driving, Approach, Short Game, and Putting. Everything was great. That’s why a particular facet didn’t grab attention.

In 2015, leaders in strokes gained approach earned the most per event. Only one in top 15 in each category: Spieth. pic.twitter.com/qqreGBd1w2

What this does suggest, however, is that Spieth was playing at the absolute limit of his capabilities. To have utilised those skills so effectively at such a young age is remarkable, but it does leaves open the question of how he will perform when he isn’t consistently playing at that level. If his game was to drop by 10%, it remains to be seen whether he would still find a way to compete effectively with those players (such as McIlroy and his driving) who have a notable advantage in certain aspects.

It is something that we shall discover with time.  What he does clearly possess is a strength of mind, which is impossible to quantify with any empirical evidence. But he has it. That said, it is comparatively easier to breeze through situations when things are going your way, with the ultimate test of character coming when the cards start to turn slightly against you.

His obvious maturity and intelligence will prove useful in reassessing goals, but it may also prove beneficial to the young American if Day carries on from where he left off last year, with Rory also plotting a strong response to what had been an injury fractured and major-less campaign. The shared spotlight is much easier to handle than being the sole-performer on stage.

In the end, expectancy should be tempered, not due to any faults with his game or attitude, but to the historic difficulty of replicating such achievements. Since 1965, Jack Nicklaus, Lee Trevino, Tom Watson, Nick Faldo, Nick Price, Mark O’Meara, Tiger Woods, Padraig Harrington and Rory McIlroy have all won at least two majors in a calendar year. Of that exulted group, only Jack, Tom and Tiger managed to repeat a similar seasonal haul in their legendary careers.

What has to be remembered is that Spieth is about to enter only his fourth year on the tour, with potentially two decades of a window ahead of them. Whether he slips or (somehow) rises even further this season will not have much relevant context to where he will be in five or ten years. That is what makes him such a compelling figure. We are embarking on the early journey of an incredible player, but it is one that inexplicably may have already had its most memorable chapter.

There are questions to be answered by Spieth in 2016, and it will be fascinating to witness just how he responds to them.

How much did Jordan Spieth earn in 2015