The TaylorMade SLDR was released last August with much fanfare and has since gone on to be hugely popular choice on tour. Today TaylorMade have announced the next generation of the SLDR family - the SLDR S metal wood range range which has been engineered to provide distance for golfers of all abilities and swing speeds through high-lofted metalwoods. 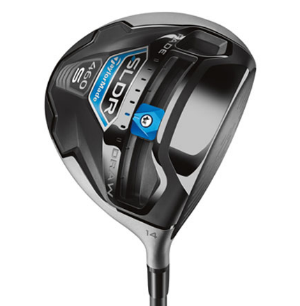 engineering feat wherein weight is re-located to the front of the head to promote faster ball speed, a higher launch angle and a lower spin-rate. TaylorMade discovered that adding loft to drivers engineered with low forward CG characteristics results in astounding leaps in distance.

The well-documented benefits of lofting up inspired TaylorMade Golf to release high-lofted SLDR S drivers, with its first 16° driver being brought to market this month to provide distance for golfers of all abilities and swing speeds. The SLDRs Driver will be available in 10°, 12°, 14° and 16°. In addition, an elegant satin silver crown paired with a black-button back deliver awe-inspiring aesthetics for the SLDR S family – which includes a 460cc driver, fairway woods and Rescue clubs.

“It’s no secret that high launch and low spin maximise driver distance, but some players think that only Tour pros can benefit from lofting up with low forward CG,” said TaylorMade Chief Technical Officer, Benoit Vincent. “This is simply not true. By lofting up, you can generate serious distance regardless of swing speed with SLDR S, which has low and forward CG properties, along with a sliding weight that assists shot shape.”

SLDR S fairway woods and Rescues feature a larger footprint and a shallower face compared to SLDR. They are shaped and crafted to be more playable for golfers of all swing speeds and abilities.

Each club in the SLDR S lineup is bonded. However, golfers will still enjoy a plethora of loft options as the driver is available in four high-lofted models, with five available options for fairway woods and an additional four Rescue lofts.

After the introduction of SLDR, PGA Tour and European Tour Professionals began lofting up their drivers at an unprecedented rate. On average, players who use SLDR have gone up a full degree or more in loft, and in many cases Tour Professionals have gone as high as 12°. In fact, at the 2014 RBC Heritage there were 14 drivers with 12° of loft or more in play.

“Historically on the PGA Tour, guys would de-loft their drivers in an attempt to achieve a lower ball flight and gain distance,” said Keith Sbarbaro, TaylorMade Golf’s Vice President of Tour Operations. “But when we introduced low forward CG, players started to see huge distance leaps from added loft. This has been a monumental shift in the way of thinking and a breakthrough in unlocking more distance. With SLDR S, the same dominating distance is available to golfers of all abilities and swing speeds.”

• Long distance comes from the combination of fast ball speed, high launch-angle and low spin-rate. TaylorMade discovered that moving the CG forward promotes more ball speed and less spin.
• Helps all golfers get closer to the ideal launch conditions of 17*/1700rpm
• Unlocks distance by enabling golfers to hit the ball higher with less spin – WHEN THEY ADD LOFT.

Loft is making an impact onTour

Not too long ago, seeing a driver with double-digit loft on the PGA Tour & European Tour was an anomaly. But that all changed after TaylorMade introduced the distance-producing power of low forward CG.

To help celebrate the launch of SLDR S metalwoods, TaylorMade will “Silver Out” the majority of its Tour Staff Professionals on the PGA Tour at the Players Championship and the HP Byron Nelson Championship and on the European Tour at the BMW Championship at Wentworth. Players will wear silver adidas Golf apparel, carry silver staff bags and play Tour-only satin silver SLDR drivers with adjustable features.

The SLDR S driver is available in four high-lofted options (10°, 12°, 14° and 16°), each equipped with the lightweight Fujikura Speeder 57 graphite shaft and TaylorMade high-traction grip.

The entire SLDR S metalwood family will be available at retail on 14th May 2014.