What has happened to Luke Donald?

WHAT on earth has happened to Luke Donald? Barely two years ago he won the Race to Dubai and the PGA Tour money list. On top of that, he was named European Tour Golfer of the Year, PGA Tour Player of the Year, won the Vardon Trophy and the Byron Nelson Award.

During 2011 he also became world no1, and spent much of the following year battling for the spot with Rory McIlroy.
In 2011 he won the WGC Accenture World Matchplay, the Children's Miracle Network Hospitals Classic, the BMW PGA 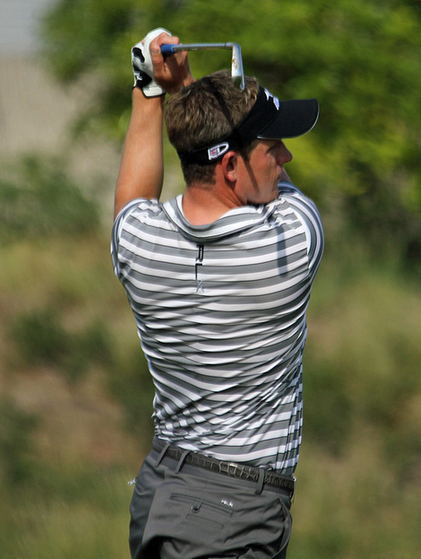 Championship and the Scottish Open. And he lost the Heritage in a playoff. The following year he added the Transitions and successfully defended his PGA title, as well as winning the Dunlop Phoenix event in Japan.

Having being described as a serial runner-up, a man who lacked hunger, Donald rammed his critics' words down their throats - and then some.

All that was missing on his CV was a major and that, surely, was the next step. Except that in 2013, Donald's game fell off a cliff.

Donald missed his first-ever cut in 119 European Tour events at the Maybank Malaysian Open. And his attempt to retain the BMW PGA championship ended with rounds of of 78 and 72. He went into the final round of the US Open two shots off the lead, but a 75 saw him slip back to eighth. And he missed the cut at both The Open and US PGA.

That was all bad enough, but his game shows few signs of recovering. There is a misconception that Donald is a straight hitter. He is not, and never has been. He is also one of the shortest hitters on tour. Playing your second shot from the rough, 40 or 50 yards behind everybody else, puts you at a serious disadvantage. And there were signs last year that the Englishman had become more wayward than ever.

In the past, he has made up for his shortcomings with the driver by consistently rifling long irons to the heart of greens. When you throw in a great wedge game and one of the best putting strokes in the game, it becomes easier to understand how he has been able to compete with the bombers.

But even his short game has come unstuck, presumably because of the added pressure he been putting on it.
Donald, who lives in America, has spent the winter working hard on his game and was in optimistic mood when the season got under way. He finished 19th in the Nedbank Challenge and 37th in the Abu Dhabi championship, breaking 70 just once in eight rounds. He also failed to set the world on fire in the Qatar Masters.

As his form slips, so does his world ranking. He is now 27th. In 2011 he had 14 top 10 finishes on the PGA Tour, the following year he managed eight more. Last season, he managed just five, plus three missed cuts - as many cuts as he had missed in the previous two years combined.

The most worrying thing for Donald is that he has worked tremendously hard trying to iron out the kinks and rediscover the magic, yet he seems to be as far away from his best form as ever. Yes, he finished eighth in the Honda Classic and fourth in the Valspar championship, but he never looked like winning.

He has been working with a new coach, Chuck Cook, in Florida, and said: "I’m very encouraged by what I am seeing and the progress I’ve made, so I’m hopefully looking forward to a lot better year than the last one."

He successfully defended the Dunlop Phoenix at the end of last year, although it's small beer when compared with the sort of tournament he has been accustomed to winning.

"Obviously, wins give you confidence and tell a player he is moving in the right direction and that victory and the way I achieved it vindicated for me a lot of the work I’m doing with Chuck," explained Donald. "They’re big changes for me. I felt like I needed to get more control with my long game, and I had it that week."

Over the winter break, Donald split from IMG, the only management company he had known since he turned professional. His affairs will now be looked after by Steve Loy, who also manages Phil Mickelson.

"I’m someone that doesn’t like a lot of change in general and I’d preface what I’ve got to say by putting on record that over 11 years IMG represented me very well. But the management scene has changed a lot in the last five years. There’s a lot more choice out there.

"Steve is someone I’ve known since I turned pro and I got along straightaway with him. Management is really a relationship business and I’ve always enjoyed my relationship with Steve. I’ve been impressed with the way his business has grown."

At the age of 36, Donald remains determined to win a major or two. He also has his sights set on the Ryder Cup. As the only European in the history of the event to have played four times and won four times, he will know that he has to turns things around - and quickly. On his current form, he will not make it automatically and would be unlikely to gain a wild card pick from Paul McGinley, the European captain.

"I certainly want to be there, and hopefully by making it off the points lists," he said. "But I’m not a fan of putting pressure on myself in that regard. I’d rather think about the process of getting better each week and trying to churn out consistent results. If I do that, I know I will be on the team."