Zach Johnson Tournament of Champions winner - In the Bag 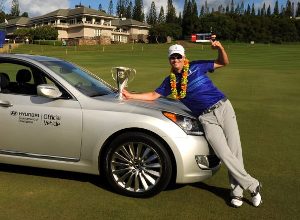 Champions in Hawaii. Johnson picked up where he left off in 2013, after winning the Northwestern Mutual World Challenge in December. The American topped Jordan Spieth by one-shot to take the title at the Kapalua Resort in Maui following a stunning closing round of 66, en route to a 19-under par, 273 victory total. At the first PGA Tour tournament of the calendar year.

Johnson trusted a host of Titleist equipment for his success in Hawaii, including the

Since putting his new set of AP2 714 irons in the bag at the World Challenge last month, Johnson has enjoyed two wins from two starts.

In The Bag - Tour winners

Tags: in the bag