Viewer phone-in powers reduced by the R&A and USGA

The R&A and USGA has released their latest update of 'Decisions on the Rules of Golf'. A total of 87 changes have been made, but four stand out.

The first could be construed as direct response to an incident involving Tiger Woods earlier this year. Woods was assessed a two shot penalty in a PGA tour event when he was deemed to have caused his ball to move when removing a loose impediment.

While it is not unusual for a player to accidently move his ball and be assessed a penalty. What was unusual was the fact that the ball could only be seen to move when viewed at slow motion on high definition TV camera.  The new decision on the that rule now states:

New Decision 18/4 provides that, where enhanced technological evidence (e.g. HDTV, digital recording or online visual media, etc.) shows that a ball has left its position and come to rest in another location, the ball will not be deemed to have moved if that movement was not reasonably discernible to the naked eye at the time. The R&A and the USGA have issued a Joint Statement on the Use of Video and other Visual Evidence to further explain the governing bodies’ position on the use of this technology.

New Decision 14-3/18 confirms that players can access reports on weather conditions on a smartphone during a round without breaching the Rules. Importantly, this new Decision also clarifies that players are permitted to access information on the threat of an impending storm in order to protect their own safety.

Thirdly, to help clarify if a ball is embedded or not, the R&A have illustrated the rule:
Revised Decision 25-2/0.5

The fourth change relates to playing a provisional ball:
Revised Decision 27-2a/1.5 allows a player to go forward up to approximately 50 yards without forfeiting his or her right to go back and play a provisional ball.
Printed copies of “The Rules of Golf” and “Decisions on the Rules of Golf, 2014-2015” are available from the USGA and The R&A -R&A website - Click Here
This Info-graphic from the USGA illustrates the new decisions in detail: 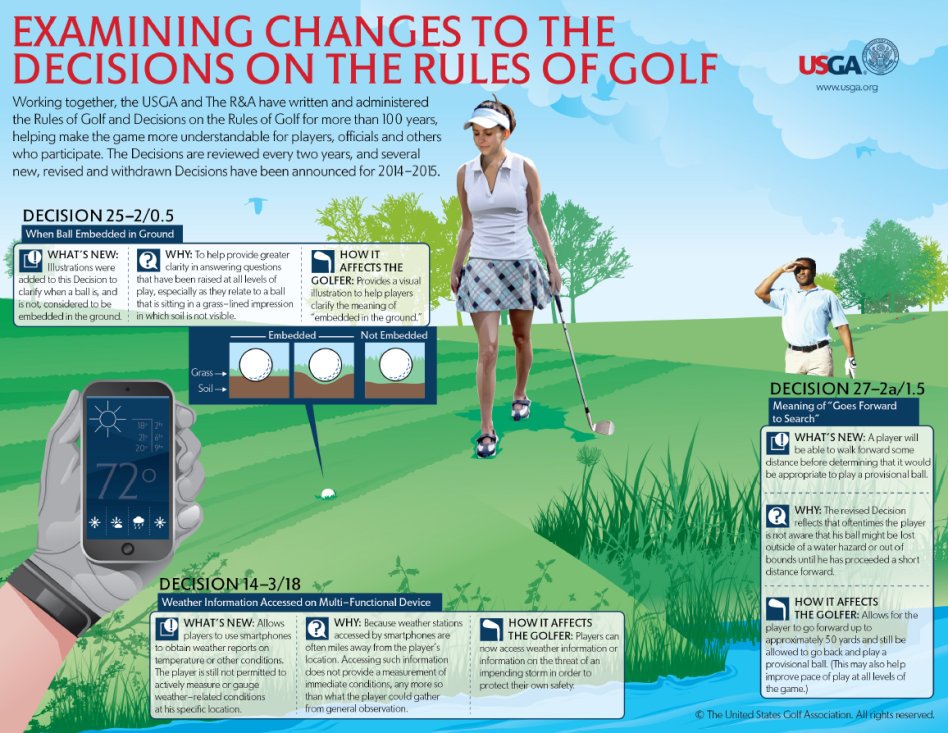