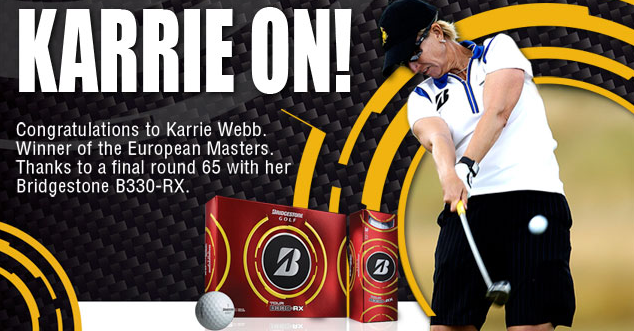 Bridgestone Golf celebrated two outstanding victories within hours of each other this weekend with players using different versions of the Tour B330 series ball designed for golfers with varying swing speeds either below or above 105 mph.

First Australia’s Karrie Webb played the last 27 holes in 13 under with a Bridgestone B330-RX ball to capture the ISPS Handa Ladies European Masters title at The Buckinghamshire GC by a shot for her third win of the year ahead of this week’s Ricoh Women’s Open at St Andrews.  She also moves up to No.6 in the world rankings and takes her career earnings to more than $18m in the process.
Webb, who joined Bridgestone last year and was measured with a swing speed under 105 mph, has enjoyed a resurgence of form with the B330-RX ball in 2013, having also won the Australian Ladies Masters and the Shoprite LPGA Classic.
A few hours later, Brandt Snedeker won his second PGA Tour title of the year at the RBC Canadian Open at Glen Abbey GC, Ontario, by three shots with a 16 under total using a Bridgestone B330 ball that fits his 108 mph swing speed. Ranked at No.7 in the official world rankings, he moved into third spot in the FedEx ratings behind fellow Bridgestone player Matt Kuchar, who finished as a runner-up in Canada.
Snedeker – who also plays with the Bridgestone J40 Cavity Back irons and J40 Black Oxide wedges – joins Kuchar, Tiger Woods and Phil Mickelson as the only multiple winners on the PGA Tour this year. His victory comes days before the WGC Bridgestone Invitational starts at Firestone Country Club in Akron, Ohio this week.
"Brandt and Matt (Kuchar) both endorse RBC, so if this week is any indication of the level of golf they play at their sponsors' events we're all in for a treat at the WGC Bridgestone Invitational," said Dan Murphy, EVP of Marketing/Sales - Bridgestone Golf, Inc. "As if the PGA Tour success wasn't enough for one weekend, we also had Karrie going out and winning in style as she builds up to the Women's British Open.”
Bridgestone Golf is the undisputed No.1 golf ball fitter with more than 222,000 fittings across the United States, Australia and the UK & Ireland, where it has doubled its schedule of Ball Fitting Challenges this year. The majority of golfers (77%) measured in the fittings are using a ball that doesn’t match their swing speed and is therefore not helping their game.

Brandt Snedeker - In The Bag

The rise and rise of Snedeker