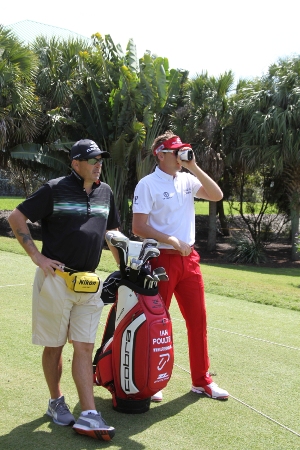 The official count was conducted by SPORTS MARKETING SURVEYS ahead of the European Tour’s flagship event, the BMW PGA Championship, eventually won by Italy’s Matteo Manassero.
The majority of the players and their caddies at the BMW PGA Championship were using the same 1000AS rangefinder that is used by the European Tour Caddies Association official yardage book supplier, Dion Stevens.
This exciting announcement follows hot on the heels of Nikon signing notable deals with global golfing superstar, Ian Poulter, to become a global ambassador for Nikon.
The BMW PGA Championship also marked the week that Nikon finalised a 2-year deal with the European Tour Caddies Association to become the official laser rangefinder provider.
Tim Hunnable, Commercial Manager Nikon UK Sports Optics, said: “There’s no higher acclaim than that of the tour professionals and their caddies. To be used by more caddies and players than any of our competitors, at the biggest tournament on the European Tour is a fantastic achievement.
“This result gives us a huge amount of satisfaction and proves our products are unparalleled at the highest levels.”
For more information visit  www.nikongolf.co.uk

Nikon Coolshot AS hits the fairways