A stunning new life-size statue of Seve Ballesteros now greets all visitors to The Shire London, in Hertfordshire. 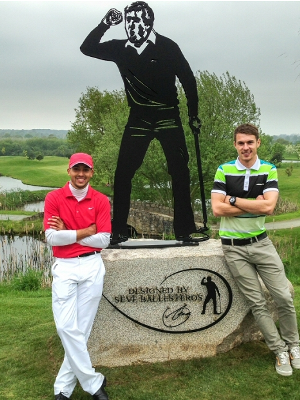 Shire owner Tony Menai Davis decided to commission the statue on April 9th, on the day that the club marked what would have been the Spaniard’s 56th birthday.
Borehamwood-based metal designers Joro Originals designed and built the piece, which recreates Ballesteros’s iconic fist-pumping victory celebration on the 72nd hole of the 1984 Open Championship at St Andrews.
“This spectacular new artwork is a fitting way for us to celebrate our seventh golf season” said Menai Davis. “Seve visited The Shire London several times and is warmly remembered by all who met him on his visits here. He was first and foremost a gentleman, as well as an outstanding sportsman and golf course architect, and we are tremendously pleased that his winning pose – which we also have as our logo here – is now the first thing you see when you visit The Shire London.”
Joro, who specialise in custom metalwork, used galvanised mild steel to create the statue. Painted black, the intricate detailing cleverly recreates this most famous of all Ballesteros photos. The 1.83m (6ft) statue – Seve’s exact height – sits on a massive Cornish granite base, taking the artwork’s overall height to an imposing 2.65m (8ft 8 inches).
The piece sits on 1m deep level foundations, created by course manager Tony Peterson and his staff. The total weight, including base, is 2.5 tonnes.
Early admirers included Arsenal international footballers Theo Walcott and Aaron Ramsey who, along with many of their Arsenal team mates, played Seve’s course at The Shire London on the day following their team’s qualification for the 2013/14 European Champions League.
Fore more information please visit www.theshirelondon.com

The Shire - Rated and reviewed