McDowell wins out against Simpson to claim the RBC Heritage

Graeme McDowell has registered his first victory of the season in the RBC Heritage tournament this weekend.

The win moves McDowell up to 8th in the Official World Golf Rankings and 6th in this season’s FedEx Cup. 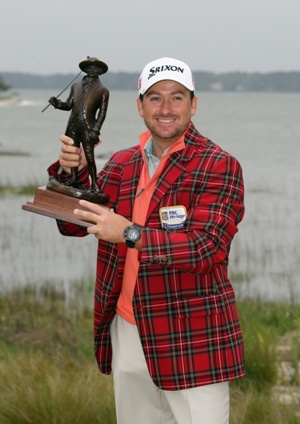 The Northern Irishman beat Webb Simpson in a sudden death playoff to claim his first victory of the year, after both finished the tournament with a total of 9-under-par in regulation play.
As the wind got up around the Harbour Town Golf Links at Hilton Head, McDowell showed he had total control over his Srixon Z-STAR XV golf ball with a series of impressive iron shots.
The 33-year-old has also recently added to his bag the new Cleveland 588 MT 3 and 4 Irons, as well as two new 588 RTX wedges* in 52 and 58 degree lofts.
McDowell said of the victory: “This game kicks you more often than it gives you a pat on the back, it’s hard to win. I guess the weather was what the doctor ordered. I needed that to get close to the leaders. Bogeys were at every turn. You really had to control the ball well.”

Graeme McDowell In the Bag:

In The Bag Series - Tour Winners