The prestigious tournament will be moving back to Sheshan International Golf Club in Shanghai in 2013 after this year’s event was staged at Mission Hills, Dongguan. 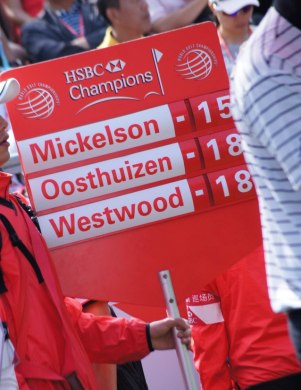 counting as official money on the PGA TOUR and the winner earning a three exemption on the tour. The event will also award full FedExCup points plus the 10% premium awarded to all WGC events, putting the tournament in line with the other WGC events. The WGC-HSBC Champions purse will also increase from US$7 million to US$8.5 million.

“Today has been a great day for Ian, a great day for golf and a great day for HSBC. As the last four days have illustrated yet again, the WGC-HSBC Champions is a world class event which is right up there with the best that this great sport has to offer.

“We are just weeks away from our tenth anniversary as a major international sponsor of golf and this is the ideal way to start the celebrations – a great winner and three more years of world class golf to enjoy in China.

“From next year the event will return to Shanghai and Sheshan International Golf Club and this announcement feels more like a rebirth than renewal. Since we came to China in 2005 we have seen the game develop beyond all recognition and the WGC-HSBC Champions has proved to be the perfect stage for golf in Asia to come of age.”