De-Vere member wins 'once in a lifetime' trip to Medinah

Jonathan Barber will fly out to the Ryder Cup next month after scooping first prize in an exclusive Ryder Cup competition for De Vere Club members. His once-in-a-lifetime De Vere Club Ryder Cup experience will include flights, accommodation, and transfers, as well as tickets to each day of the competition, held at Medinah Golf & Country Club. 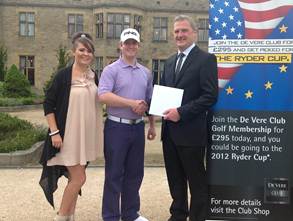 Barber, a 16-handicapper from Newcastle who joined the De Vere Club in June last year, has been actively involved in both the golf and leisure aspects of the membership by utilising his points not only for golf but at the resort’s impressive array of luxurious spa facilities. His partner Jasmine will accompany him in Chicago next month, as the couple soak up the unique carnival atmosphere at golf’s most exciting team event.

“I can’t believe it. This is by far the best prize I’ve ever won in my life. I’ve always wanted to go to the Ryder Cup and to go in the states in beyond my wildest dreams.” commented Barber. “Winning completely sums up the great experiences I’ve had since joining the De Vere Club last year. I’ve found the membership great value for money and totally unlike any other. Plus, I’ve been able to take advantage of the leisure and spa facilities at each of the resorts. In fact, I referred two of my friends and that is what ultimately helped me win the prize, as by doing so I received two extra entries into the competition. I’m looking forward to cheering on the European lads in September and would like to extend my thanks to De Vere for making it all possible.

The De Vere Club is the pioneering golf and leisure membership scheme introduced in March 2010, which has experienced remarkable success since being launched by Honorary Captain Peter Allis. As well as ISPS Handa PGA Seniors host venue Slaley Hall, the membership includes other Championship layouts such as The Carrick on Loch Lomond, Wychwood Park and Wokefield Park. In just two years the De Vere Club has received backing from sporting legends Andrew “Freddie” Flintoff and Harry Redknapp, as well as TV golf personality Sophie Horn, to become the fastest growing golf and leisure membership in the country.

For more information on the De Vere Club visit www.thedevereclub.co.uk