Miguel Angel Jiminez has joined fellow European Tour stars and past Ryder Cup players Paul McGinley, Darren Clarke and Thomas Bjorn as a Vice-Captain to Jose Maria Olazabal for the match at Medinah this September. 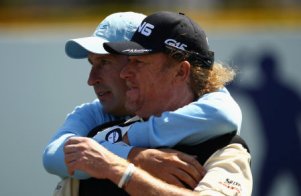 registered 11 victories. Olazabal had this to say on Jiminez's inclusion along with the other Vice-Captains:

"Thomas, Darren and Paul were there with me supporting Colin Montgomerie in 2010 when we regained the Cup and Miguel, of course, made a huge contribution to that match including winning his singles.

“Miguel was Seve’s right hand man in 1997 and you know he has a very simple and great philosophy – he always sees the positive side and makes people feel better.

“He shares with Thomas, Darren and Paul that passion, commitment and desire to win and like them I know he will encourage everyone in the team room. I now have four great friends behind me – four guys I know, four guys I trust and four guys familiar with this contest which is so important because The Ryder Cup is unique.”