McGinley, Bjorn and Clarke named as vice-captains for 2012 Ryder Cup

The Ryder Cup at Medinah is fast approaching and Jose Maria Olazabal is starting to put his final plans in place including naming three of his four vice-captains. The final event for qualification is next week at Gleneagles and Olazabal will the choose his Captains picks on August 26th.

Paul McGinley, Thomas Bjorn and Darren Clarke will hope to help Olazabal to what would be a famous victory on American soil. Olazabal had this to say about his backroom trio:

"For me to have these guys – all such great friends – by my side is fantastic. I know like me they will now be 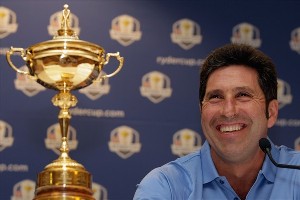 counting down the days to to Medinah with one aim – to return home with the Cup".

“Thomas, Darren and Paul share a special spirit and love for the game and they have the respect and admiration of everyone in golf. Their passion, commitment and desire to win will encourage everyone in the team room and for me it is so important to have guys you know, guys you trust, guys familiar with this contest because The Ryder Cup is unique.

“My own experiences as a Vice Captain in 2008 and 2010 taught me that you need a lot of help that week. You need eyes, extra eyes to follow the players in the practice rounds to gather as much information as you can about how everyone is playing.

“Then it is important to have each match watched because you have to hand in your pairings for the afternoon matches when the players are still out on the course. That means it is essential to have all the information you can get before you put those pairings down on paper – my Vice Captains will make sure that is the case and I will name the fourth one at the August 27 Conference when I announce my two picks.

“This Ryder Cup, like so many in the past, will come down to who shows the most character under pressure. It is certain to be close but I am confident we have the players to bring the Cup back home with us, and to have Thomas, Darren and Paul already on-side in Team Europe is a massive boost.”

More on this story can be found on the European Tour Website.