Recently Golfshake.com writer Matt Holbrook got the chance to catch up and have a chat with Richard Logue (@richlogue81) who is currently caddy for James Morrison on the European Tour, and has been for the past 18 months. 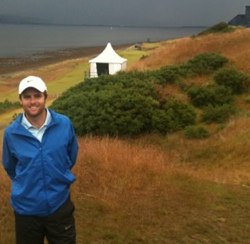 Richard recalls beginning his Journey 'On the Bag' in 2004 with his best friend Jamie Elson after realising he wouldn't make it in the professional ranks himself after getting down to a very respectable 3 handicap.

How long have you been a tour caddy for?

This is my ninth straight season on The European Tour, I'm still however regarded as a rookie by some of my peers.

Who have you caddied for?

I have caddied for Jamie Elson, Anthony Wall, Phil Price, Mike Lorenzo Vera, Anthony Wall...again! Oscar Henningson, Soren Kjeldsen and James Morrison currently.  I have worked for a lot for one or two weeks when I've been between full time jobs.  My Claim to fame is caddying for Hugh Grant at Wentworth in The Pro - Am........mum loved that one!!!!

Who have you had most success with?

Anthony Wall, he finished 13th on order of merit in 2006, had 3 second places in big tournaments including the Dunhill Links and was highest placed Brit in The Open - 11th. I did ok that year.

Who has been your favourite player to caddy for?

How much time do you spend with "The Boss" each week and do you have a social life with the other caddies?

Probably more time than he spends with his wife! so we need to get on well, which we do. On a typical week I would guess 50 hours at the golf course, practice and competitive rounds. We stayed in a house together at The Open...what a week!!!

I stay and hang around with some of the other caddies and there is great banter between us all and generally we  get on... it's a bit like a travelling circus.

What is your favourite part of being a tour Caddy?

Going to some of the nicest places and the best courses in the world.........and getting paid for it!

A lot of time away from family and friends, I can miss out on a lot at home. special occasions, birthdays's etc

Tour players have massive bags, what do you keep in them?

Generally clubs, waterproofs,balls, gloves, food , brolly, tees, markers ... you also need room in there for the players head incase the unlikely event occurs during the round that it comes off!!!

What's the most random item you have had in a bag?

Erm...a fifteenth club is a slightly strange thing to have in the bag!!! Not happened to me but has happened a couple times on tour recently ... and will happen again!!! Worst nightmare...

What do you do when your player is spending hours practicing?

I stand on the range most of the time and pretend to look interested...sometimes I count divots to keep the mind active... It can be boring but if the coach isn't there and the player has swing issues he may ask you to help so you need to at least pretend to know what you are on about....sometimes though if you are at a new course I will try and sneak out on to the course for another look.

Do you spend time on the course on your own getting your yardages?

I do , amount of time spent would depend whether it is a new course or not. many of the courses are on the schedule every year so you get to know them pretty well. That said, the yardage books these days are brilliant...every bit of information you need is on them other than telling you what club you need to hit!!! Dion Stevens, who does the yardage books provides a great product and 'almost' makes us caddies redundant.

We see pros making all kinds of notes in the yardage books, what types of thing are they writing?

Generally the club they used on that particular shot, the direction of the wind at that time and how far the ball pitched. The information can then be used as a reference if the player has another similar shot.

Do you think the use of Distance measuring devices should be made legal in order to speed up play?

Maybe slightly but I think there are other issues that could be resolved to help speed up play besides that, eg more penalties for slow play.

We saw yourself and James have 3 excellent days at the BMW at Wentworth this year. Due to a 81 on the Saturday you only managed to finish up for a tie for 10th, which is still superb, but it could have been much much better. What went wrong?

Nothing really went wrong, that's just golf. One or two bad shots and it can do that to you. Looking back we were both really please with the weeks work.

Who has the final say, you or the man with the club in his hand?

You can provide as much good information...or bad to the player as you like but they are the one holding the club and hitting the shot. They always have the final say...

How often would you turn and say "I told you?"

Very rarely ... unless I really wanted 'the sack'. It would not go down well at all.

Do you feel the pain of missing a cut as a caddy like you would the joy of picking up a win?

Despite 5 second placed finishes I am yet to win with any player, for the moment I can only imagine how good it will feel when I caddy for a player who wins. Im sure it will happen...soon!

As for missing cuts...I hate it as much as anyone. It's an awful feeling, especially If you are in an obscure place around the world and can't get home!!!!

We saw Ian Poulter and his caddy Terry Mundy discussing shot options to the nth degree during The Open. Is that the norm or were they overthinking their options?

Given the fact that Poulter is 25 in the world (roughly) and has been with Terry his caddy for a few years I would say that works for them...there was alot to figure out at The Open so they probably spent more time than usual. We played with Poulter at Wentworth and they weren't over complicating...just having a right good laugh!

From a caddy's point of view, how much could you blame Steve Williams for the way Adam Scott blew up on the final few holes at The Open?

I would find it hard to attribute much blame towards Steve Williams...Having been there I can say that on a lot of holes there were at least 2/3 options off the tee...since the bunkers are so well placed. The player really had to go with what he felt most comfortable hitting and I would say that by the 69th hole of the week Adam knew what he wanted to hit.  Anyway...Stevie is a 'great front runner' :-)

Are there any Pro's (no names needed) that you dread being paired with for any reason? (reason can be provided :-))

From the top of my head I would say no, I haven't burnt any bridges with any old bosses as you don't know what might happen in the future. That said, there are some that you would rather be out with than others. Being out with some of the 'slower' and more 'deliberate' players can be a liitle tedious..Sorry, no names mentioned!!!

If you could change one rule in golf, which one would it be and why?

If a bunker is flooded like a few were at The Open for example, the player has to drop in the bunker and the ball will most likely plug, hence no advantage is gained from the drop. Awful rule, needs changing!!

If roles were reversed, would you do anything differently than what you do?

Yes, I would play!!! I don't think you could beat being a top player nowadays with all the financial rewards on offer. I enjoy my job though ... next best thing!!!

If you could pick any pro golfer to carry for you if you was playing, who would it be and why?

Bernhard Langer, commonly regarded as the best 'caddy' in the world!!! He has numbers in his book from places you didn't know existed. And would need them with the places I visit on a golf course....Absolute gentlemen too!!!

Golfshake would like to thank Richard for taking the time out of his busy schedule to chat with us. We wish both him and James all the best for the remainder of the season.