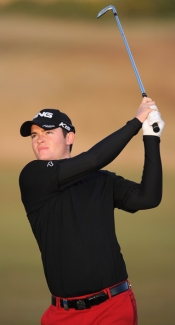 At 25 years old, Englishman Gary Boyd is one of those European Tour golfers looking to record his first victory and elevate himself to the next level. Boyd, born in Banbury, Oxfordshire, turned professional in 2007 the year after winning his maiden amateur tournament at the Asia-Pacific Amateur Championship. In April 2009, he won his first professional event at the Tusker Kenya Open en route to a sixth place finish in the Challenge Tour rankings, good enough to earn a European Tour card for the 2010 season.

His first season on the European Tour was a successful one. He retained his card comfortably for 2011, finishing 50th in the Race to Dubai standings in a season that included a second place finish at the Czech Open. He was more subdued in 2011 and missed out on the season ending Dubai World Championship, despite another second placed finish at the BMW Italian Open. Golfshake caught up with Gary after the Abh Dhabi HSBC Championship to hear his thoughts on a successful start to life on Tour and his expectations for the season ahead.

I asked him how he felt about his performance last year compared to his maiden season:

He explained “Obviously I had a great first year on tour. Looking at my stats over the 12 months I played pretty much the same, but there are still some areas I need to work at. I had a poor second half of the season where in 2010 I played my best.”  Even though he won over 130,000 Euros in Italy he failed to qualify for the Dubai World Championship, which he views as “definitely a big disappointment. That is one tournament where every player on the tour wants to be at the end of the season.”

Boyd had a six week off-season, and the preparation he put in should stand him in good stead going forward. He took some time away from the game and spent some time with friends and family, before travelling to Orlando for three weeks to see his coach and prepare for the season ahead. I asked if he had been working hard on any particular aspect of his game:

“All areas, but my main focus was on putting where I felt I had lacked in previous seasons,” he said.

“I worked pretty hard on making my mechanics of my swing better which will help in playing more consistently.”

Hopefully all his hard work - coupled with a sense of perspective and a level of maturity gained after completing two full seasons on the European Tour – will lead to his first victory.

“I hope so! That is one goal I haven’t achieved just yet, but I am working hard and I know if I keep doing that my game is there to be in contention.”

As always, technical ability needs to be accompanied by work ethic and sound mental disposition, and Boyd has been working on the latter. The biggest lesson he has learnt from life on tour is “to stay patient. There is a lot of golf to be played over a full season and you can’t ‘flush it’ every week.”

He adds: “Also, not just these two seasons but in previous years I have learnt a valuable lesson; to take some time off and not play every week.”

Gary will also be buoyed (excuse the pun) by his experiences at the 2011 Open Championship:

“The best thing about that weekend week was the excitement going into the weekend in contention in a major, which I haven’t experienced before. I got a little unlucky among some other guys with the weather on Saturday which pretty much blew me out of a chance to win, but I took some great things from that week.”

Given his perspective, work ethic and latent natural talent, 2012 could be the best year of Boyd’s career. I asked about his goals for the season ahead:

“I have set a few more goals off the golf course than on it. I feel if I can achieve those goals off the course, the results will take care of themselves on the course. Obviously a win is one of my goals but to break into the top 100 in the world is the main goal right now.”

Boyd has had a fine start to his career on the main stage. With the golfing talent pool as it is nowadays, comfortably securing a tour card in you first two seasons on tour is no mean feat. He is close friends with one Ian James Poulter, and I was keen to find out about the relationship between the two, how much inspiration Boyd draws from Poulters achievements, and if he feels he has the potential to emulate the 11-time European Tour champion.

“There’s always a lot of friendly banter between us, whether it’s about golf, football, or just general everyday life. Ian has had a fantastic career to date, won some big tournaments and played a big part in Ryder Cups. I know I’m working hard and I feel I can be in contention more than I have been, so we will see what the future brings.”

Boyd’s dream is to win a major championship:

“I think that is every players dream and there is something very special about the Masters. I always grew up watching some of the magic that happened on Sunday around Amen Corner and the roars that echoed around the course. The British Open is close behind but the Masters would definitely be on my wish list.”

As with so many of today’s golfers, there is absolutely no reason why their dreams cannot be realised. Robert Rock’s recent fairytale story will give players like Boyd even more confidence that they can break into the top 50 in the world and start participating in events such as the Masters. As we all know, anyone is capable of winning any golf tournament should every facet click into place. Boyd has the skill and, more importantly, the attitude and work ethic to be a big success, and everyone at Golfshake wishes him every success in attempting to achieve his goals this season.