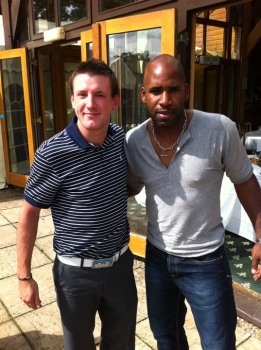 The name Jonathan Joseph may not be a name you recognise straight away.

But international DJ, entrepreneur, celebrity golfer, Liverpool fan and supporter of many charities that raise a lot of money for needy causes, DJ Spoony is a name you should know.

Spoony is very keen on his golf and as well as that, his charity work in which he often combines the two is very close to his heart.

As a Hackney boy, growing up in the inner-cities was tough, as golf was the furthest thing from his mind.

Other loves such as music and mainly football took preference as it was the football pitch is where Spoony would have loved to ply his trade.

“I always wanted to be a footballer,” he said, “But as the Djing got busier I had to make a choice.

“I was always out every Friday and Saturday night usually until the early hours working so it was hard for me to commit fully to a team, so I wanted something to keep my juices flowing and that’s when I turned to golf.”

In the year 2000 when Spoony took up the game he was fortunate enough, through all his hard work Djing and on the Radio to join the Stoke Park Club where he quickly became a self-confessed addict to the game.

In 11 years and a few lessons by some top professionals he has dropped to a nine handicap and plays regularly in charity events and European Tour Pro-am’s such as the Dunhill Links, BMW Championship at Wentworth and even the French Open in Paris playing alongside some of the biggest names in the celebrity and sporting world.

However not forgetting his roots he is an ambassador and main fund raiser for the 'Golf Roots Foundation’ which is a charity committed to the sporting and social development in young people through the game of golf.

“Golf is a great game and gives young people so many life skills,” said Spoony.

“The spirit in which the game is played in helps them develop, hopefully into a better person and I’m glad I’m in a fortunate position to help out those maybe in less so positions, so I enjoy doing what I do and will continue to raise as much money as possible.”

Not content in just being a household name he created the ‘Spoony Classic’ which is an annual golf event staged at Stoke Park and shown live on Sky Sports every year to help raise money for the ‘Golf Roots Foundation’.

Professional golfer’s such as Ryder Cup star Ian Poulter and European Tour player Simon Dyson have supported the event by playing alongside sporting names such as Sir Ian Botham, Jamie Redknapp and Denise Lewis to name but a few.

Speaking at the Emirates Airline Invitational at Brocket Hall Golf Club which is ran in conjunction with the Jude Brady Foundation of which Spoony is a Patron and another charity close to his heart. He now works actively with the foundation to raise money through golf and other activities.

The Invitational was Golden Ticket Qualifier where the prize on offer was a place in the Golden Ticket Grand Final in the United Arab Emirates where the winner is to compete for a chance to gain a spot in one of the world’s most renowned Pro-ams - the Emirates Airline Invitational Hosted by Abdullah Al Naboodah and features 56 professional golfers including Lee Westwood and Graeme McDowell.

After his round which he said could have been better, Spoony has a lot to keep him busy away from the golf course and charity events and even more interesting activities on the way.

“It’s been a busy year for me, you know. I’ve got my finger in a few pies so we’ll see how they go and I’ve actually just recently been on a course to give myself a certification and qualification in certain areas so hopefully get that out into the public domain at some point and of course still Djing out there which is important, I like playing my music.”

Keep looking out for any news in regards to DJ Spoony and his movements as I’m sure they’re going to be happening including his very own Silverspoon Foundation to be launched very soon.

If you would like to donate, support or be involved in the charities mentioned then please follow the links that appear. Any help is greatly appreciated.