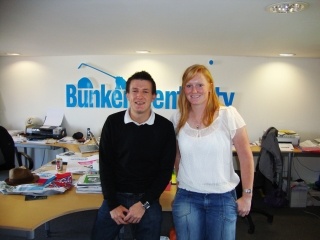 For Ladies European Tour pro and Queen of the Green Sponsor Kylie Walker it has certainly been a year to remember so far.

Having turned pro at the start of the year and travelled the world so far this season Kylie admits that it’s been a bit different from what she expected.

“I have really enjoyed it so far and I’m having a great time out there, but more importantly I have enjoyed my golf, but it is quite different being on tour full time. I played in pro events as an amateur but it’s a completely different concept knowing that I’m a full tour player.

One of the most fashionable ladies on tour wearing the Queen of the Green , Bunker Mentality’s sister company, Kylie does get asked all the time what branding her clothes are:

“I do get a few looks if I’m honest but it’s only good comments I receive, some of the ladies really like it and I think it’s great. I love the brand because it is more feminine than others with the frills down the front and the puffy sleeves. I think it’s important to look good but ultimately it’s the golf that come first.
You look at girls like Paula Creamer and Natalie Gulbis who are more feminine and an absolute dream for brands because of the way they look, but I’m sure if you ask them golf would take priority.”

Having travelled to Morocco and Turkey and further afield such as Australia and South Africa, Kylie felt that part of being a tour golfer the most difficult:

“It has been tough if I’m honest being out on the road three to four weeks at a time, but I’m still new to all this and I’m learning all the time from any mistakes which I make and I just make sure that I try and get plenty of rest.”

Having had a great amateur career, winning the Scottish Order of Merit in 2008 and representing Great Britain and Ireland in the Vagliano Trophy in 2009, Kylie has endured a tough start to life on tour:

“I haven’t had the best of starts this year but I think I just need more time, I will take these next few weeks that I have off at home and really work hard on my game to prepare me for the second half of the season both on and off the course.”

Establishing herself on the European Tour is an immediate aim for Kylie but in the future America beckons:

“The ladies US Tour is certainly the place to be, it’s the best ladies tour around and it would be great to play there one day.”

After the two weeks dissecting her game, Kylie has three weeks of tournaments starting in Ireland in three weeks time, then on to Wales before her home Open in Scotland.

She would love to be the Queen of the Green on home soil that’s for sure.