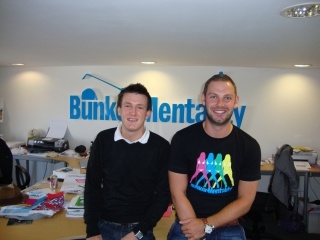 If you play with Phil Mickleson on the final day of a Major you must be doing something right.

This is exactly what happened to tour player and Bunker Mentality sponsor Paul Waring at the 2008 Open championship at Royal Birkdale and with steady progression the Birkenhead pro is striving to get back to those days.

Meeting in the Bunker Mentality HQ fashion is never far from Waring’s thought both on and off the course:

“Being associated with this brand is great, it’s quite different and it’s not too in your face which suits me down to the ground. I like my clothes, but the stuff I wear on tour is really, really nice.”

Into his third year on tour after a glittering amateur career Paul is gunning for his maiden tour victory:

“It’s certainly something that I think about and I’m sure with the hard work I’m putting in I’m confident that It can’t be too far away.
A good friend of mine David Horsey won a few weeks ago in Munich so there’s good banter going on with us after he’s got the first one in but I’m encouraged by my game, so we’ll have to wait and see.”

After what Paul describes as a bit of a flat season so far, with two top ten’s and four finishes within the top 30 you can automatically see that one day the hard work will pay off:

“I feel like a better player this season, even if I’m not playing great, I’m still making the cut and grinding out places to get a bit more money, which I wasn’t doing last season.”

After a wrist injury forced a long lay-off last season, steady progression and moving up the ranks on the European Tour is what lies ahead for Waring:

“Every golfer wants to win a Major, but realistically I want to be looking at the top 100 in the world so I can qualify for the Majors and the WGC events  and maybe then I can start to challenge.”

Introduced to the game by his grandfather, who sadly passed away before he turned pro as he successfully came through qualifying school, Waring still has people around him that keep his feet on the ground:

“My mum’s like my rock, she can still give me a clip round the ear if she feels I’m getting ahead of myself and I have my best mate on my bag, but I also come from a very sporting family, my mum and a couple of my cousin’s are good at swimming and tennis respectively so there’s sporting mentality in my blood.

It’s great that I get paid for playing golf but the glamour and everything that comes with the game is ignored and it’s about trying to get as high as you can.”

Asked if he had any advice for aspiring amateurs out there, Waring said that he wished he had turned pro sooner than he did:

"I’m not saying it because of the money, but it’s not that different from the amateur tours, it’s still golf but you go from playing eight to ten events a year to playing 25 to 30 and you have to be focused on every single one. If I had to say anything it’s keep practising and working hard on your game and take the experiences that you have as an amateur into the pro tour.”

Waring certainly has a great golfing mentality and if I had to guess it may not be too soon before we see if join the great names in the winner’s circle this year.

Next up is Stockholm and the Scandinavian Masters then back for the Irish Open in a couple of week’s time. We wish him the best of luck.