The PGA EuroPro Tour concluded on October 22nd after a splendid finale at Northumberland’s Slaley Hall determined which five players will be progressing to the Challenge Tour.

Undeniably, this satellite tour provides endless opportunities into professional golf and the quality on offer for the 2021 calendar was stronger than ever. The 15-event season took the tour throughout the United Kingdom and to some magnificent venues.

The EuroPro Tour has an impressive alumni too, including Tommy Fleetwood, Aaron Rai, Louis Oosthuizen, Ross Fisher and the very first winner of Rookie of the Season in Tyrrell Hatton. 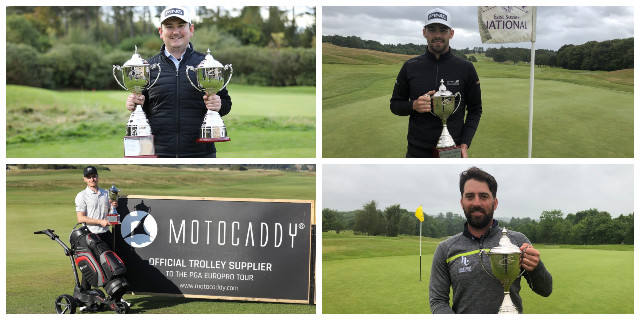 The first event of the season took place in May at Harleyford Golf Club and the field knew it was important to start well and provide a platform for further success.

Typically, a victory at any of the events should see a golfer secure his place in the Tour Championship, where the prize money is doubled, and the dream of the next stage is only three days away.

The new season started in dazzling fashion, as it became evident that many of the hopefuls were skilled and thus, ready to make their mark on the tour.

The eventual winner was Gian-Marco Petrozzi after he bested Nicholas Poppleton in a playoff, with both men carding 17-under-par for their three rounds.

The field, as expected, was strong and a score of 14-under-par would have secured a top ten finish.

In contrast to the previous event, this was a harder scoring tournament but the quality of Donnington Grove Golf Club provided the players with a stern yet fair test.

Conor O’Neil took victory at the second event of the season after finishing on nine-under-par through his three rounds, two better than both George Woolgar and Jeff Wright.

A few honourable mentions include Jamie Rutherford (T9th) and Dermot McElroy (T9th) who would go on to have fantastic seasons.

As the players navigated their way to Bradford, there was another tournament to be won as the tour congregated at Cumberwell Park Golf Club for the third event of the season.

Again, securing victory early into the season would ease the stresses of booking their place at the Tour Championship and this was something that all the players were aware of.

John Parry took victory after a three-shot margin, having beat Sam Broadhurst, Tom Sloman and Joe Brooks who all sat behind Parry after his winning score of 15-under-par.

Rutherford produced another positive outing, having finishing T5th alongside Calum Fyfe - a talented golfer who was expected to do well for the season.

Mitchell Waite, representing Filton Golf Club, secured his maiden top ten finish of the season after a three-under-par closing round bolstered him to a nine-under-par final standing.

The tour took to Scotland for the fourth event of the season, allowing the players to experience the characterful Montrose Golf Links layout.

Will Enefer secured victory at this event after a splendid final round of five-under ensured his overnight lead remained intact.

Two Scottish golfers occupied T2nd in Fyfe and Sean Lawrie - who is the nephew of Open Championship victor Paul Lawrie.

Parry, winner of the previous event, finished T6th and six shots off the pace as his promising start to the season continued.

Travelling south and the tour visited Worcestershire for the fifth event of the season, held at the prestigious Vale Golf & Country Club.

Another low scoring event that saw eventual winner, Joe Dean, pick up his first win of the season at the expense of Dermot McElroy - who shot a scintillating eight-under-par for his final round.

Despite the Northern Irishman’s heroics, he remained three shots back from Dean who had played brilliantly all week.

Waite finished T12th after an excellent final outing while Fyfe, who struggled throughout the first two days, placed T16th after posting five-under for his final day.

He shared this position with Rutherford who failed to exhibit the rhythm he effortlessly showcased over the course of the first few events.

Clevedon Golf Club was welcomed back into the EuroPro Tour rotation in July and a playoff was required to separate the top two.

Stephen Shephard conquered after birdieing the 18th and first playoff hole, while Dan Brown had to settle for runner-up after his par.

Will Enefer, winner of The Eagle Orchid Scottish Masters, finished in T3rd after a riveting 64 helped him card eight-under for the day and move up the ranks significantly.

Ashley Mansell, who represents Clevedon Golf Club, strung two marvellous rounds together before a final outing of 71 dampened his chances of victory on home soil.

Mitch Waite finished T11th on 14-under-par and Callum Farr was two strokes back from him, finishing on -12.

The southern swing of the tour was well underway as the players traversed to Kent.

Jack Yule demonstrated his class after securing a comfortable three-stroke victory after rounds of 64, 67 and 68.

Yule topped the leaderboard with -17 and Rutherford finished solo second after finishing his tournament at -14.

Two players at T3rd carded -10 for their week, which highlights just how impressive both Rutherford and Yule had played that week.

Curtis Knipes finished T5th with a nine-under-par final score while Daniel O’Loughlin, who recently graduated from the American college system, secured T10th in one of his first starts of the year.

The final day of the PDC Championship proved difficult for scoring, as the majority of the field finished over-par for their round.

Jack Hawksby, however, took his chance brilliantly as he carded a four-under 68 to snatch victory from a plethora of players.

The winning score of eight-under provides insight to how difficult the conditions and the course was playing that week, with a score of even-par securing a T10th finish.

Jack South recorded his first top ten finish of the year after a two-under final round while Parry finished T4th largely due to a disappointing finish.

The trip to Mannings Heath seemed to be the crucial point of the season, as Waite picked up his first of two seasonal victories.

He was made to work for his win, however, as he and Jack McDonald both finished on 15-under-par and thus, were thrusted into a playoff for the win.

After playing the 18th on three occasions, Waite parred all three while McDonald could only bogey his third attempt at the playoff hole.

Rutherford and Brown shared T3rd and just one shot back from the leading two while Ryan Campbell guaranteed his maiden top ten finish of the season.

The Cubefunder Championship provided the optimal platform for Dermot McElroy to record his maiden win of the year, after displaying his promise on multiple occasions previously.

A sparkling final round of 64 (-8) stole victory from both Waite and Brown, who had performed so consistently throughout the week.

Rutherford had finished T6th while Knipes was three shots back, occupying the T14th position with Farr.

Fresh off his win in Luton, McElroy travelled with the rest of the tour to his native land and looked for back-to-back victories.

Unfortunately, he failed to make the cut but a new winner was announced in Irishman Simon Thornton.

Waite, as consistent as ever, finished solo third while Farr was four strokes back from the Bristolian at T8th.

Knipes and Campbell shared T11 while Rutherford felt the wrath of the cut after two sub-standard rounds.

For the first time this season, a member of the EuroPro Tour had earned a second victory.

Waite had held an exhibition of golf as his three rounds of 65, 65 and 68 saw him finish on -21 and three ahead of runner-up Jack Doherty.

Enefer and Farr occupied T10th alongside winner of the Wright-Morgan Championship, Shephard.

The Motocaddy Masters may just have been the most exciting tournament that took place on the previous EuroPro season.

South’s final round score of 59 resulted in the golfer earning approximately £120,000 through bonuses from both the tour and Cobra - who he is sponsored by.

Conditions for the final day were perfect for scoring and while South’s 59 was unbeaten, Jack Davidson carded a 60 of his own to rival the champion for the bonuses.

Waite finished T3rd, Knipes T5th and Rutherford T11th in what proved to be a fascinating and highly competitive event.

Fyfe recorded his maiden victory of the season after a phenomenal display on the Isle of Man.

Three successive rounds of 64 (-8) helped him bulldoze his way through the field and win by a margin of four strokes.

McElroy was back among the top 10 after mirroring Fyfe’s final two rounds and Parry shared that position with the Northern Irishman.

The final event of the season was of particular interest to the players, as the prize fund was doubled and thus, the chances of obtaining a Challenge Tour card grew intensely.

For the majority of the field, victory at Slaley Hall would secure Challenge Tour status but the Hunting Course proved expectedly difficult.

Rutherford secured top spot after a tight finish, carding -8 for the tournament and one better than Fyfe, McDonald and Brown.

As a consequence of his triumph, he finished first in the Order of Merit list and Waite’s finish of T21st secured him second in the OoM.

Fyfe finished in third and Brown joined him in graduating from the EuroPro Tour while Parry, the winner of the third event of the season, snuck in at 5th to remove Enefer from the top five.

For the five that have graduated, they will be looking at filling the shoes of the previous alumni from this progressive tour.

Over the years, Tommy Fleetwood, Louis Oosthuizen, Tyrrell Hatton, Aaron Rai and Marcus Armitage have progressed from the EuroPro and they have all carved successful careers among the elite of golf.

There are no limits for the five that will progress to the Challenge Tour and quite possibly in the next few years, we could be talking about their own major success.