Back in April 2020, Golfshake Ambassador Matt Holbrook tested the PRGR Launch Monitor by SuperSpeed Golf, and he has now tried out the newer and improved version that has been released for 2021.

Last spring, at the start of lockdown, I had a great time building my swing speed using the SuperSpeed Golf Training System, including the PRGR Launch Monitor to measure and record my swing speed as part of the training.

At the time, it came in very handy during lockdown practice and I was also using it to give me shot data as I was hitting shots into my net at home. As with a few ‘more affordable’ launch monitors, people were genuinely interested in the unit, but would question the accuracy of the data being given.

When I was asked to try out the new and improved PRGR Monitor for 2021, I wanted to put it through its paces, but this time more range/course orientated. Rather than just hitting balls into a net. 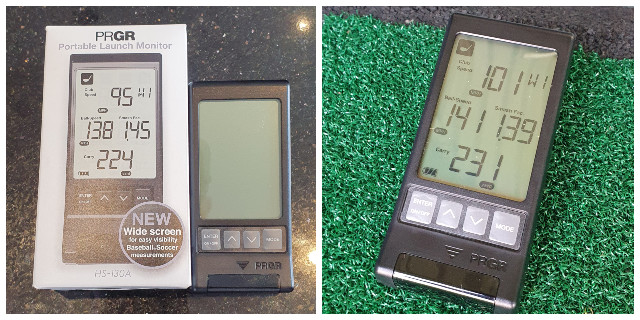 Well, to the eye, it’s only the larger resolution display, making things a lot bigger and easier to read. But it's what’s on the inside that counts with this newer model.

The higher quality processor and faster doppler radar sensor improves accuracy - or so the claims suggest. The new scientific algorithms also aid the increased precision and consistency and the improved ability to read higher lofted wedges.

All claims I wanted to put to the test.

I set out to test this, when ironically enough I was at the driving range where a local pro known to me was in-between lessons and his top of the range launch monitor was free so asked him if I could hit some shots and compare the numbers.

With that added confidence, I have also been also to use the PRGR Monitor both at the range and on the practice field, really honing my numbers with my wedges. I have found that it picks up half and three-quarter shots just as easy as it does with the full shots.

Given the improved quality, better display, and the peace of mind that the numbers I am seeing on the PRGR Monitor are just as precise as the best launch monitors in available, I think the PRGR will be a great addition to anyone’s equipment as we head towards the end of the season and the winter grind starts up again.