Beginning in winter, Golfshake Ambassador Matt Holbrook was determined to build some extra speed and distance into his golf swing. Working with his coach Sam Forgan and deploying the SuperSpeed Golf training system, he saw initial gains in his swing speed in a relatively short space of time. You can read the introductory feature about the SuperSpeed Golf training system here. 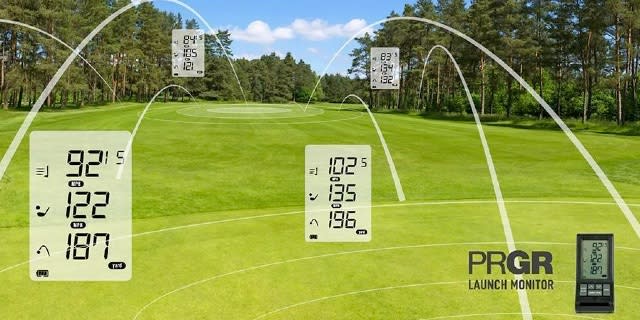 The PRGR Launch Monitor is a small, compact and fairly priced Doppler Radar-based launch monitor that has a dual use in the sense it can be used on a driving range, course, studio, or even a back garden for measuring both actual golf shots, but also swing speed using the SuperSpeed Golf training system.

Due to the current timing, April 2020, Matt tested hitting shots with the PRGR launch monitor with a ball into his home made driving range, he also took the opportunity to make daily recordings of swing speeds to show the incremental increase during the programme he was following.

When I received the PRGR unit I was excited to give it a try. I had looked around for a solution to use at home and some on the market are excessive in price so at £185 from www.superspeedgolf.co.uk I was interested to see how it stacked up.

Set up is very basic, it’s a battery operated unit (battery is included), switch it on and you are pretty much read to use. The unit isn’t too big and comes with a nice bag to carry it in but would probably fit in most pockets. It’s very easy to navigate using the controls to switch modes and change clubs, the instructions that come with the unit are also easy to understand.

On each swing/shot the display will give you club head speed, ball speed, estimated carry distance and you can change the mode to give you estimated total distance. Additional modes include the ability to add smash factor.

To start with, I used the monitor on speed training with the SuperSpeed training system. I wanted to take new base measurements using each of the different weighted sticks.

I made recordings over five days using each of the different weighted SuperSpeed sticks and utilised the PRGR to record my swing speed. Being able to use the combination of the SuperSpeed PRGR and SuperSpeed Training system has made a real difference in the progression of my swing speed – but more importantly being able to monitor and stay on top of it! In the five days of intense training I managed to add 6mph of driver head speed!

I also used the PRGR unit whilst hitting balls into my home made driving range. I just started out hitting some 8 irons to give me a good idea of how accurate the unit is. I would normally expect to see my 8 iron carry around the 160 yard mark so this was fairly precise. In fact, I then hit some 6 irons and also found these numbers to be right where I would expect them to be, so I am super impressed with what I am seeing from this unit. My only real concern about is it doesn't provide spin rates and take that into effect – which I only noticed when switching from carry to total.

Obviously, given testing limitation currently, the unit isn’t able to tell me which direction my ball is going, however as this unit is so versatile I will be able to use it either on the course when practicing or at the driving range.

Overall, the PRGR unit from SuperSpeed Europe is excellent, and the numbers given accurate, the setup is easy, it’s as portable as you can get and for less than £200 represents incredible value. I’m rating this a solid 9/10.