Seve Ballesteros was taken from us far too soon. He succumbed to brain cancer on May 7, 2011. It is hard to believe we have been without the Spanish genius for 10 years. This was a man who was the very epitome of the word charisma. He flashed his smile and lit up rooms and golf courses all around the world.

He should never be forgotten. And thanks to renowned sports photographer David Cannon and his wonderful book Seve: His Life Through The Lens, he never will be. Published to mark the 10th anniversary of his death, it is a picture-led book that captures the very essence of the man.

The book opens with a message from Seve’s son, Javier in which he writes of his father: “People know you for your golfing career - your victories, Major championship wins, Ryder Cup performances, your personality, your charisma and the unique way you played - but few know that you were an even better dad than golfer.” That is some accolade.

There are a number of heartfelt tributes to the memory of the greatest golfer of his generation, the most poignant of which comes from Jose Maria Olazbal, his great friend and the man with whom he formed such a formidable partnership in the Ryder Cup. And, of course, the Ryder Cup and its abiding images and memories form a significant part of Cannon’s book.

There are so many iconic images from Seve’s relationship with that little gold trophy. He simply loved beating the Americans, and how it shows. There is the flashing smile on page after page, the determination as Cannon captures the impossible recovery shots played from the most unlikely of places, the joy of celebrating with his teammates after yet another victory and the sheer passion that epitomised his every move on the golf course. 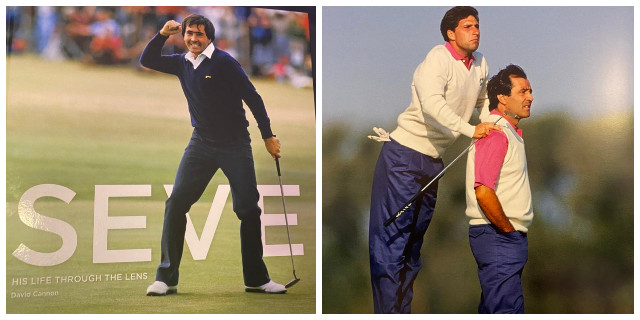 Like Seve, Cannon is a master of his craft. Nowhere is this better illustrated than the denouement of The Open Championship at St Andrews in 1984. This was the probably the defining moment of Seve’s playing career. He came to the final hole knowing that he need a birdie. Behind him, Tom Watson was in trouble on the Road Hole. The Spaniard probably thought a birdie was required to force a playoff. In the end, Watson’s misfortunes at the 17th meant the putt Seve faced was to win - at the home of golf.

Cannon reproduces perhaps the most famous photographic sequence in the history of The Open - and he was the only photographer to capture it. As Seve struck his putt, Cannon pressed the button and caught the entire sequence as the ball tracked towards the hole, closer, closer, closer, before finally dropping. The celebration provided golf with its most iconic celebration - and the great man would later have it tattooed on his forearm.

But this was in the days before digital photography and Cannon didn’t really know what he had until he got to London the following day. “At 7am I was standing on the doorstep of our offices in Morden where we had a slide processing laboratory, waiting for the Darkroom Boys to arrive. To reassure myself, my first action on entering was to perform a quick ‘clip test’, tearing off just the first two frames and processing them…phew, to my huge relief they appeared spot on. Later that morning I was looking at what have become some of the game’s most iconic images. Moreover, I’m pleased to say that Seve loved them, so much so that he chose one to be his company logo.”

The book follows Seve’s early years, his victories in the Majors, his life in Pedrena, his time as a global icon, his impact on the European Tour, the Ryder Cup and concludes with memories and tributes.

My personal favourite is from the February day in 1992 that Cannon spent with his hero on the beach at Padrena, where Seve learnt to play the game. Cannon writes: “I had to pinch myself to believe that I was watching this incomparable champion playing golf on the beach where it all began.” And when it was all over, Cannon roped into helping Seve recover the golf balls he had been hitting. “After about 25 minutes we had retrieved 33 of the 34. Back in the blissful warmth of the car, our initial numb-induced silence was eventually broken by a mischievous chuckle and the words, ‘I do not like losing Titleists!’”

Seve Ballesteros is the greatest golfer I have ever had the pleasure to watch playing this great game of ours. This wonderful book brings back many memories of a legend and is a must for anybody who loves the game of golf. Cannon deserves our thanks for keeping the memories alive.

Seve: His Life Through The Lens, by David Cannon, is published by Vision Sports Publishing