This is the next instalment of our 'look back at the decade' series, Golfshake writer Will Trinkwon looks back at possibly the biggest changes in golf over the last decade.

Was 2010 really all that long ago? When Graeme McDowell became the first ever Irish winner of the US Open, Phil Mickelson clinched the Masters and Tiger Woods’s first of what have turned out to be several comebacks was just taking its tentative first steps? It was. That bygone annum was also a year in which Nike still made golf clubs, Rory McIlroy PGA Tour (whose namesake had yet to win a major at this point) was Tiger Woods PGA Tour, and when, for the everyday player, things like custom fitting were a princely oddity. Now of course, things are very different. But what are the main things that have changed? As we turn into 2020, Will Trinkwon counts down the biggest shifts of the outgoing decade. 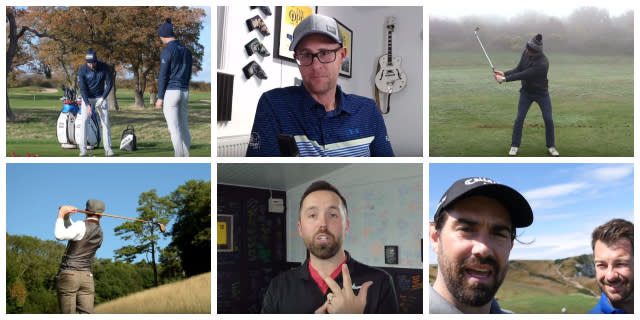 It’s crazy to think about but YouTube (the video sharing site that infiltrates pretty much everyone’s lives) was only founded in 2005 – and it took another 10 years before golf really thrived on the platform. Since the mid 2010s, however, thrived it has. The most popular golfing YouTuber, Rick Shiels, started up in 2012, and has now amassed more than 717,000 subscribers on his channel. Peter Finch, Mark Crossfield, and – if we expand our net to include Instagram celebrities – Paige Spiranac are all further proof of the impact it has had on our sport. While traditional magazines and golf shops still survive, there’s no doubt that there’s been a huge shift in how people engage with golf. These days people are just as likely to get a lesson from the internet as have their grip tweaked by a flesh and blood pro.

2. Video and new tech in coaching

Sticking with the video theme, another big change in the last decade has been the increase in tech used in coaching. Certainly, golf coaches were using video cameras and various other tracking devices before 2010, but it was in the last decade that such methods became really mainstream. Simultaneously, there has also been a rise in golfers videoing themselves. This has been facilitated by increasingly futuristic smartphones, with apps such as Swing Index and V1 Golf allowing players to capture and analyse their swings in great detail. 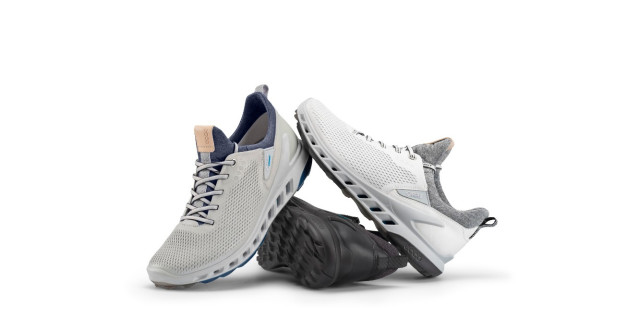 In 2012, Fred Couples ruffled the green-jacketed men at Augusta when he turned up for the Masters in what appeared to be a pair of trainers. Nearly 8 years on, however, the Ecco Golf Street shoes in which he rolled into Georgia are a favourite of players all over the world. Metal spikes, once so ubiquitous, have been fazed out, and even soft spikes could be close to extinction, as more and more golfers opt for comfort and a casual style, spurning traditional shoes.

It’s not just individual YouTubers and golf pros who have spearheaded the rise of social media – larger organisations have been instrumental, too. Chief among these is the European Tour, whose social media savviness has earned it over 179,000 loyal subscribers. From tournament highlights, including shot reels for individual players, to its innovative ‘14 club’ series (which pits European tour players against each other in the golfing equivalent of HORSE) and ‘hole in one’ challenges, the European Tour has embraced social media to the fullest and has been rewarded with a reach that it didn’t have 10 years ago.

Another big change in the last 10 years has been innovation in new ways of playing the game. After finally waking up to golf’s problem with slow play and keen to widen its appeal beyond traditional demographics, organisations such as the European Tour have been hard at work imagining new formats. One of the most successful of these has been GolfSixes. The first professional GolfSixes tournament was played in 2017, and has featured top golfers like Tom Lewis and Thorbjorn Olesen, while, at grass roots level, the GolfSixes League has been a big boost to getting young people into the sport and joining clubs.

6. More flexibility in how you play and club memberships

10 years ago, 7 day a week golf membership was the go-to way of playing for the serious golfer. But, while traditional membership is still popular, the last decade has been marked by a rise in alternative options. These include an increase in the popularity of societies, especially premium groups such as the IGC Society, the Trilby Tour (which, though founded in 2006, hit its stride in the 2010s), as well as more flexible kinds of membership such as 5 day a week options and intermediate rates. Golf at Goodwood pioneered a particularly successful model when they introduced their credit membership around the start of the last decade, allowing golfers to tailor their membership fee to how frequently they plan to play.

Since 2010, training aids have improved dramatically – 10 years on, there’s now a far greater range and quality than there was before. Take, for example, Eyeline Golf’s patented putting mirror, which hit the mainstream in the early 2010s – simple, yet effective, this aid has improved the putting strokes of players all over the world and is a standby of putting greens on the European and PGA Tours. Another device that has had a big impact on how we practice is the Sure-Set. Again, the premise is simple, two hinged sticks which help you generate the correct amount of wrist cock in your back and through swing. Easy to use and intuitive, this aid nevertheless makes a huge change to your game.

8. The rise of laser range finders

Do laser range finders count as a practice aid? I’m ruling not, since, at least for amateur golfers, they can be used in competition. However you categorise them, though, there’s no doubt that the rise of laser range finders has been one of the biggest changes in golf in the last decade. Bushnell leads the field, but with companies such as Nikon, GolfBuddy and EasyGreen crowding the market, there’s a range finder to suit every player and budget. I swear by the Bushnell Tour V4 myself, but whatever model you go for – getting laser-accurate distances to targets is a game changer. Literally.

What person who has ever watched golf on TV can fail to notice how different the physiques of today’s players are from the pros of the late 2000s? With a few exceptions, such as Tiger Woods and David Duval, 2000s pros were (comparatively) dumpy and unathletic – golf was considered the cousin of darts rather than football. Over the last decade, however, a revolution has been taking place. These days, its rare to find a professional who DOESN’T have a nutritionist and go to the gym. This has filtered down to the amateur game with more and more coaches now pushing the importance of biomechanics, proper workout routines and stretches to get the most out of your game. 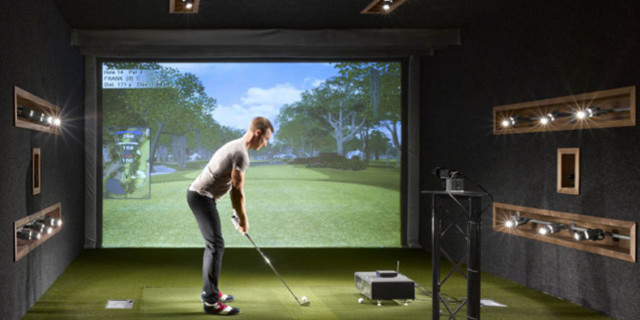 These days you don’t have to go on a golf course to play golf: thanks to the rise of golfing simulators. Trackman’s products are perhaps the most famous, allowing you to tee it up at Pebble Beach and St Andrews from the comfort of your living room. AboutGolf’s Curve simulator is a more premium option, which wraps around your eyeline for a more immerse experience. It’s a sign of these simulators’ quality that pros such as Rickie Fowler have installed them in their houses for practice. At £30 grand for a top of the range model, they’re not cheap though.

11. Dominance of Sky for golf coverage

There was a time when the BBC was a byword for golf coverage. Since the 2010s, however, this title has been increasingly taken over by Sky. The takeover started with the Masters, which Sky secured broadcasting rights to in 2010, when the Beeb lost exclusive coverage. Then, even the British Open, the Beeb’s home tournament, got taken over, when then R&A chairman Peter Dawson picked Sky over the local broadcaster. Whether this shift has been a good or a bad one depends on who you ask. My view: while it restricts access, there’s no doubt that Sky’s coverage is far superior to the ailing Beeb’s. I don’t like having to pay extra, but with premium price comes premium quality. 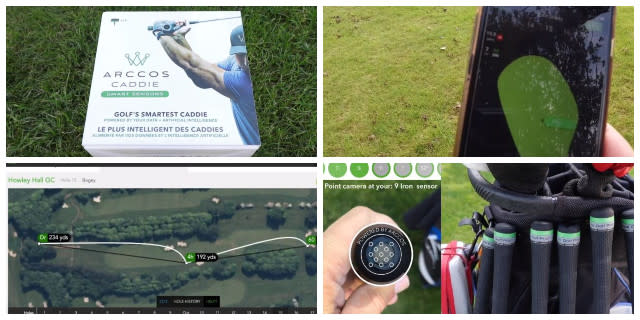 Arccos Golf only launched its Smart Grips in 2018, but already they’re transforming how ordinary players and professionals play golf. The grips are embedded with sensors which combine with an app to track shots, allowing players to know exactly how far they hit each club. The stats speak for themselves: in 2018, Arccos users lowered their handicaps by an average of 3.77 strokes. Mark my words: if the 2010s were the age of laser range finders, then the 2020s will be the era of Arccos.

Golf clothing has changed a lot in the last 10 years, both in terms of style and in terms of practicality. Following larger trends in the industry, the main thrust of the shift has been from more traditional, heavier and stuffier outfits, to a look which is more casual, practical and lightweight. Galvin Green is a key innovator here, such as with their new Edge range, modelled by Challenge Tour fashionista Guido Migliozzi, but the move to more generalist, less golf-specific wear has been taken up across all the brands.

14. Custom fitting is much more common

One upon a time custom fitting was a rare beast, an expensive and niche experience reserved for the privileged few. Thanks to changing attitudes and economies of scale, however, custom fitting is now much more common – chances are, you’ve even gone for a session yourself. Demo days are now offered by most golf clubs and driving ranges, while brands have held up their end of the bargain by innovating detailed online configurators where golfers can plug in their ideal specs and purchase an iron set according to their precise requirements.

The Importance of Custom Fit (Feature May 2019)

Think of any changes we’ve missed? Have your say in the comments below.