Biomechanics plays a huge role in modern golf, particularly when it comes to understanding how to get the most out of a golf swing. This could be achieved through the development of golfing equipment or simply altering the action of the swing to maximise the body’s effectiveness. You may not be familiar with the term biomechanics and may be thinking, what on earth is it? Well, according to Collins Dictionary, Biomechanics is “the application of the principles and techniques of mechanics to the structure, functions etc. of a living organism.” Essentially, it is the study of the mechanics involved in bodily movements.

Focusing specifically on the golf shoe, Golfshake have been lucky enough to gain an insight into how biomechanics has effected the design and creation of Under Armour’s Spieth 2 shoe. We spoke to JJ Rivet who is one of the key members of the Under Armour team, who is focused on applying biomechanics in the design of the shoes. In the modern day, there is an increasing amount of attention given to biomechanics when designing shoes in order to help shoes perform better than the competition. Rivet was able to fill us in on all things biomechanics, from how Jordan Spieth helps with the development to how amateurs can use biomechanics to boost their game. 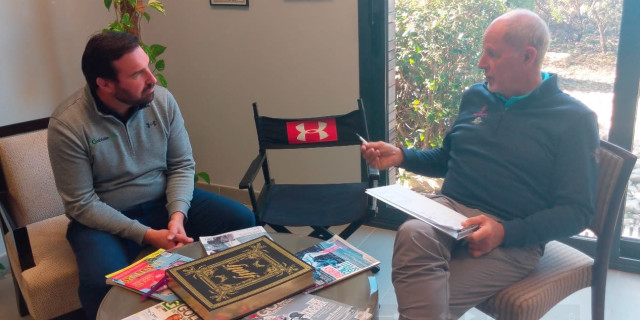 Having burst onto the golfing scene in recent years, Under Armour are now one of the leading brands when it comes to performance apparel and footwear for golf. The brand is renowned for the quality of their products and have always produced goods that are designed to perform at the highest level, which they consistently do. Under Armour Shoes are said to be designed from scratch, an JJ says that this was one of the leading reasons for joining up with UA a few years ago.

He said, “A few years ago, they were looking at starting a programme for shoe development. They approached me and said “what we would like, is to have you in our shoe department and to be able to create a shoe completely from scratch.” This is really my dream, to work like this and that’s why I signed.”

Video: How and why Under Armour applied biomechanics to the Spieth 2

Rivet’s expertise in terms of biomechanics has been invaluable to the development of Under Armour shoes and his understanding of how the principles of biomechanics can be effectively applied in golf is evident. 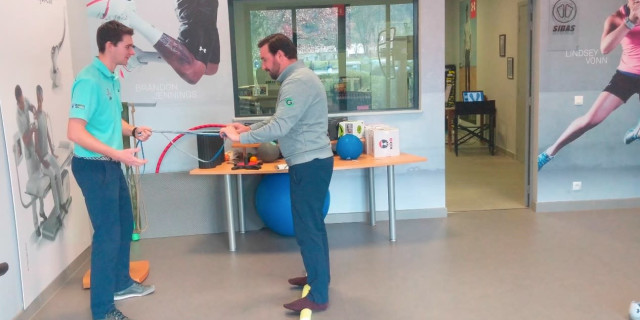 Rivet said, “Today I think there is a little confusion in fundamental biomechanics where people want everybody to be like a robot and we are not a robot, we are an organ, an organic system. So, it is very important to see what the components and principles of applied biomechanics are that can be applied to the golf swing.

“By respecting the fact that bodies aren’t like robots we need to maintain a certain quality and remember the way that the body works with the principles of biomechanics. We can never be a robot, the perfect robot will never exist. To apply the principles of coiling and raising you should be able to do it.”

Despite the fact that biomechanics is becoming ever more prevalent in golf as a whole, it is understandable that many amateur golfers may feel alienated by this area and think that only the professionals have the ability to understand fully how biomechanics can affect the swing. Yes, the professionals do have access to all the technology you could possibly imagine and could pick up the services of as many biomechanics coaches as anyone could dream of, however, there is plenty of scope for the amateur golfer, too. Rivet believes that amateurs are able to use biomechanics to help their game and that it is a case of understanding “how the body is working in term of coordination, synchronisation and speed.”

There is equipment available to the average golfer which is similar to that used by the professionals which can provide players with a great insight into how their body works, which Rivet believes is one of the first steps in understanding how to use biomechanics to improve the swing.

“I think that for less than 1000 euros you can get 6 sensors to put on your body like the ones that we use on European Tour players to see how they are working on the course. So, knowing how the body works is generally speaking, one of the first things to know.” He said.

Relating the Benefits to Regular Golfers

Rivet also stated that the explosiveness of an individual is rather key to gaining any benefits from biomechanics and this too should be one of the primary things that golfers address when exploring how using biomechanics can improve the golf swing. 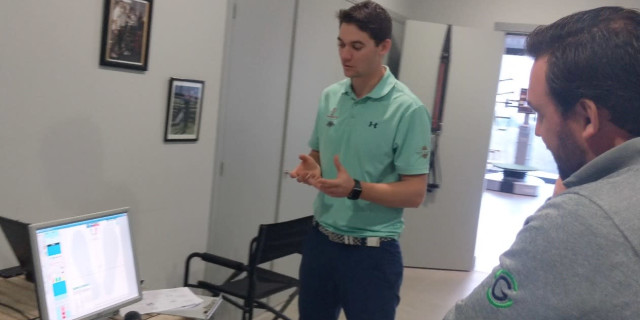 He said, “First of all, amateurs would need to know how explosive they are because if they are very explosive then they can maintain good footwork.”

The Frenchman also likens the ability to affect the golf swing by using biomechanics to how golfers affect their ball flight using technology and believes that everyone has the capability of understanding this.

He said, “We have trackman, and other great systems which are tracking the club and the ball. If you have the possibility to decide the destiny of the body, the destiny of the ball flight and how you apply the force on the ground, I would say that everybody can understand it.”

Looking to the future, Rivet believes that the usage of biomechanics will continue to increase but becoming an expert in the area will not be something that all coaches will be able to do without encountering some problems.

He said, “I don’t think we will see a lot of coaches who will try to do everything, if you try to do it all it’s a nightmare, you can’t do everything. I believe more in the correlation like we are doing. I’m in touch with many coaches worldwide and they come with players come and take the biomechanics information and they know how to play with that. After that, they create a programme that fits to them and that is what I think we will see more of.”

So, in years to come it is worth speaking to your professional coach if you use one and enquiring about biomechanics. If they are not an expert themselves then it may be a case of doing some research in to biomechanics centres that may be at your disposal.

Rivet gave us an idea of how biomechanics has been involved in the creation of Under Armour’s latest Spieth shoe, the Spieth 2.

He said, “We started from the foot and looked at how we could respect the foot without shoes and maintain certain joints and engage certain muscles. After that, we looked at what could be useful in terms of around the foot, allowing us to maintain what we have been designing on the foot itself. And that’s where it became layer after layer after layer to find something that looks like a shoe.

Looking into the design of the shoes in a little more detail in regards to biomechanics it is clear that Under Armour have taken time and seriously considered how their shoes will incorporate the principles of biomechanics to make them the best they can possibly be. To give you a little bit of context, the Hendrix bar, which is referred to in the following quote is a bar in the foot beginning at the heel and finishing at the second toe. Coil is when the upper body is rotating and working against the power that is being exerted down through the lower half of the body and ultimately the feet.

Rivet believes that the Spieth 2 is a great shoe, particularly in terms of biomechanics, and here’s why. He said, “It’s the principle of keeping the work around the Hendrix Bar as easy as possible. We know that when the force or weight is moving around the Hendrick’s bar you are not sliding or going over…


“…My main concern is how can we make everybody able to coil. If you are not using your foot, it is difficult to engage you core and to achieve the coiling which will help you to release. So when designing the shoes we look at how we can put the principles of coiling into the shoe. This is why in all of the shoes in the range you will see the same spike design, which creates an action to help avoid the effect of sheer force during the backswing. When you rotate, you unbalance the foot, so if the foot stays stable then you are able to engage all of the muscles around.”

So, by designing the shoes in such a way, the shoes are making it as simple as possible for golfers to create the coil that is needed for the swing to be at its best.


Finally, if you are anything like myself then I’m sure you’d like to know if working with one of the world’s best golfers who possesses rather unique footwork through his swing is actually a big help when developing the shoes or more of a hinderance. It turns out that it is pretty good.

Rivet said, “If we are able to improve Jordan Spieth’s footwork when he starts the transition in the downswing that’s the best we can do. We will go deeper and deeper in the future and we are working deeply with Cameron McCormick (Jordan Spieth’s coach), so that is great. We get all of the information for his coach and the player and we see what works naturally for Jordan, for us and for all golfers.”

The future looks bright for Under Armour in the golfing market as a whole, but if JJ Rivet and his team in the shoe department are able to continue in the same direction, then their shoes particularly may be up there with the best, for years to come.