Are We Seeing a Decline in Putting on Tour?

We've had the opportunity to catch-up with Barney Adams, Founder and former CEO of Adams Golf, in the past having looked into the issues around the time to play golf and forward tees in 2011 and in 2014 looking at detailed statistics around handicap golfers and the length of courses.   Adams now addresses issues around putting and asks the questions on whether we are seeing a demise in putting on tour?

When club golfers muse about the differences between themselves and the pros, many areas of the game are mentioned. Some focus on tour players’ unbelievably consistent ball-striking, their Boeing 737 ball-flights and the pure ‘click’ their shots make at impact. Others cite the short game, their finesse with their wedges and control over pitching and chipping. Almost all golfers agree, however, that a really crucial difference is putting. PGA Tour pros hole everything! Whilst it may look like that on TV though, the reality is less impressive. In fact, according to the founder of Adams Golf, Barney Adams, tour players aren’t just worse putters than they look on TV, but also statistically worse with the flatstick than tour players were 15 years ago. Take a moment to read that again. Today’s top tour professionals, the players on the PGA Tour between 2016 and 2018, are statistically less competent putters than their compatriots from 2003. According to Adams, what has occurred is a full-scale demise of putting. And one which the golf industry has still yet to wake up to. 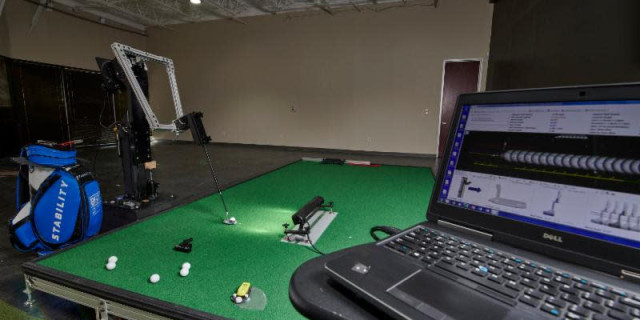 My first reaction upon hearing this was disbelief. Surely Adams must have made a mistake? The golf industry is always boasting about how technology has improved, and commentators and pundits moaning that the game has been made “too easy” and attacking today’s (to their minds) flagrantly low scoring. Surely putting would have improved, not got worse? As incredible as it sounds though, the numbers check out. As you can see in the table below, the make percentages for 2016 to 2018 combined are significantly weaker than the same stats for 2003 to 2005.

At first glance, the mind rebels. However, you can’t argue with hard numbers. While there is relatively little difference in the ability of today’s professionals vs the professionals of 2003 to hole putts of between 15 and 20 feet and beyond, when they enter the really critical scoring zone, between 6 and 10 feet, modern day pros hole almost 2% less putts, which could add up to a whole shot in a 72 hole tournament (and this is just a conservative estimate). Slight as it may sound, this difference is important. Over the course of a year, one shot a tourney adds up to over $500,000 on the PGA Tour. More significantly for the average golfer, a shot (or more) every 4 rounds adds an extra shot to their handicap.

So what’s behind this important decline in professional golfer’s putting stats? Adams first thought was that the difference may be due to changes in green speeds. “I asked several Tour players and instructors and the overriding conclusion was that green speeds have definitely increased,” Barney says. But then added that the same sources also thought that greens have also improved in terms of quality, which would roughly balance out the negative increase in speed. Tour players possess putting strokes as repeatable as pistons, and though faster greens may certainly be trickier, the better the greens’ quality, the more putts that are going to drop.

Desperate to understand the surprising statistics, and having found no answers in changing course conditions, Adams turned his attention to the only other variable he could think of: equipment. It was here where he had his breakthrough. In order to counteract the smoother and faster greens, putting experts have begun favouring a more straight-back-and-through action, as opposed to the old arcing stroke, and manufacturers have incorporated these new preferences into putters with heavier heads and greater moments of inertia (known more colloquially as MOI).

It was the latter of these updates that grabbed Adams’s attention. And particularly in connection with the putter’s shaft. While other clubs, most notably the driver and woods, have had their old steel shafts replaced with graphite ones, the putter’s, along with wedges’ and irons’, remain mainly metal. Putting his expert knowledge of golf clubs to work, Barney hypothesised that modern innovations in putting technique may have, rather than improving players putting, actually hindered it, by increasing the stress factor and stopping the face returning square to the ball at impact. Put simply, steel shafts are a poor match for today’s heavier and more stressful putter heads.

“Steel putter shafts stress during the motion of the stroke,” Adams’s company, Breakthrough Golf Technology, explains. “This in turn, results in the putter face not returning square to the target line. A square putter face at impact is the holy grail of the smooth, pendulum style stroke and steel shafts combined with today’s heavier putters are in direct conflict of achieving this.”

The solution was simple: a new putter shaft that minimised the shortcomings of steel without sacrificing touch or an attractive appearance. This is the vision behind Breakthrough Golf Technology’s Stability shaft. Designed to supersede old steel offerings, the Stability shaft “limits unwanted movement by stiffening the shaft by 25% without abolishing feel and reducing torque by almost 50%, to deliver the club face squarer at impact,” Barney says. The results have been stunning. PGA putting guru Jim MacKay found that compared with steel shafts, the Breakthrough Stability shaft produces a significant reduction in face deflection during the stroke. Putters fitted with the shaft stay squarer for longer, which, in turn, leads to golfers who use them holing more putts.

Even though Adams doesn’t pay golfers to use his product, the Stability shaft has already entered the bags of a number of top pros. The shaft is the number one fastest growing putter shaft on the PGA and European Tours, and has recently been used by K.J. Choi and the current world number 4, Justin Rose. A sharp putter was one of the key reasons behind Rose’s 2018 win in the FedEx Cup. For Justin that one extra shot was worth a cool $10 million!

For all the holed putts you see on TV, it’s amazing to find out that PGA Tour putting stats have actually, over the last 15 years, got worse. Fortunately, Barney Adams and Breakthrough Golf Technology have come up with an innovative solution. The science behind the Stability shaft is sound and the product is already making waves on tour. It will be interesting to follow the shaft’s development as it continues to revolutionise putting.

To find out more about the Breakthrough Golf Technology vist their website at:  www.breakthroughgolftech.com