Georgia Hall tops what has been a memorable two days for English golf at the Women’s British Open, holding the clubhouse lead after her second round at Kingsbarns. The 21-year-old from Bournemouth has long been touted as a potential star in the game, and we’re seeing evidence of that with a sparkling performance thus far in the East Neuk of Fife.

Carrying positive vibes from a top ten finish last week at Dundonald in the Ladies Scottish Open, Hall was part of a strong English wave on Thursday, opening the championship with a 68. Today, on a receptive morning at the spectacular modern classic links just down the road from St. Andrews, the former British Amateur champion went one better to sit at the summit of the leaderboard.

Making four birdies over the first five holes, Hall was thrilled to make such a blistering start to her day. “I've never had four birdies in a row (in a tournament) before,” she reflected afterwards. “So, I was very happy to be 4-under after five. I holed some great putts on the second and had pretty much a tap-in on the third and I holed a 20-footer on the fourth for birdie. And then the fifth hole, I holed about an 8-footer. So, I was hitting it quite close, which made things a bit easier.”

Finishing fourth on the Ladies European Tour’s money list in 2016 and recording solid results in America this year, Hall is constantly accumulating experience, and will prove an asset to Annika Sorenstam’s team in Iowa in a fortnight’s time. An opportunity that this debutant is relishing.

“It (the Solheim Cup) has been a massive thing for me since I started playing golf. You know, as soon as I heard Annika is the captain, I thought, well, there's no better captain than Annika, and I especially wanted to get on this team,” Hall added. “I've been leading (the points list) for quite a while now, which sometimes isn't easy, but I managed to play well the second half of last year and so far, this year. I'm really happy to be in the team, and it's come around so quickly but I'm just going to focus on next two days, and then I can look forward to the Solheim.”

She may yet step onto that team plane as a major champion. It’s been eight years since Scotland’s Catriona Matthew triumphed at Royal Lytham & St. Annes, and 13 since England’s Karen Stupples lifted the trophy at Sunningdale. There had been a dearth of British success in the women’s game at the highest level, but that has been rectified with last year’s LPGA Tour Championship win by Charley Hull and improved performances by both Mel Reid and American-based Jodi Ewart Shadoff.

Georgia Hall could ultimately prove to be the best of that impressive crop, retaining an unruffled approach to the game and enjoying staying in the nearby village just a short walk from the course. Set to play on the LPGA next year, it’s a career that is only progressing forward, and there could be a crowning chapter written this weekend in the shadow of the Home of Golf.

However, world number two Lexi Thompson is hoping to be the player to beat over the coming days, positioned alongside Hall at the summit on nine-under after rounds of 67 and 68. The likeable American has enjoyed a sparkling season to date and is taking full advantage of her Scottish caddie, Kevin McAlpine’s significant depth of knowledge of the layout.

“His input going into the greens, he tells me where to land it and like where I need it to come down. He's been spot on every time, and it's helped me out so much,” the 22-year-old said. “And he knows the greens like the back of his hand, as well. He's helped me out a lot out there.” 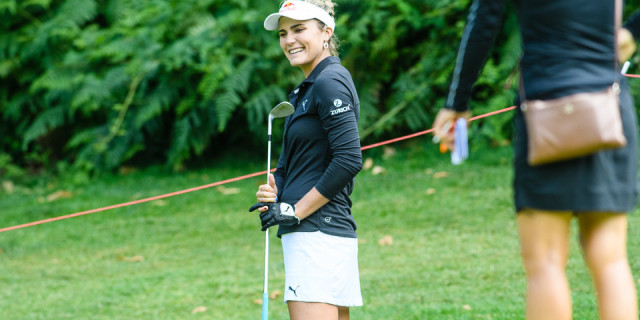 She continued: “Kevin and I, honestly, we laugh the whole round. It helps playing well and staying relaxed but we're always joking around. I think that's what makes our relationship so great out here. He keeps me relaxed but at the same time he's out there doing my numbers, reading my putts with me, basically doing everything.”

A former winner of the Scottish Amateur, McAlpine’s experience and influence may prove to be the key asset as Thompson attempts to secure her second major championship title.

South Korea’s Ha Na Jang, former champion Mo Martin and Jodie Ewart Shadoff are sitting two shots back of the leaders, with 2012 LPGA Championship winner Shanshan Feng, Megan Khang, and Thailand’s Thidapa Suwannapura at six-under. Charley Hull is among those at five-under, while the likes of Michelle Wie and Anna Nordqvist are facing the course this afternoon in wet conditions as they look to keep themselves firmly in contention over the weekend.

There is an eye-catching leaderboard at Kingsbarns, and it’s a hugely encouraging one for those observers hoping to see a British player crossing the line in a major again. The future is undoubtedly bright for Georgia Hall, but it may just be accelerated to the present on Sunday.