Dame Laura Davies secured her place in the Women's British Open for a record 37th occasion following a dramatic day of final qualifying at the Castle Course, St. Andrews. The 1986 champion survived a remarkable 14-player playoff, with 11 remaining places available into the season's fourth major at the spectacular Kingsbarns Golf Links along the road from the Home of Golf.

The 53-year-old had shot a two-under 70 on the testing Castle layout - which is the newest layout under the umbrella of the St. Andrews Links Trust, overlooking the famous town from an imperiously striking vantage point to the east. The four-time major champion had been hopeful of claiming her place outrght after that excellent score, but found herself battling a much younger squad of competitors under the majestically blue skies of Fife.

However, in typically combative fashion, the legendary Englishwoman parred the first hole of sudden death - the par three tenth - and saw her place in the championship confirmed after Nicole Garcia, Laura Murray, Laura Sedda and Amanda Linner all made bogey on the short hole, which ensured that Davies would add an extra touch of class and gravitas to the event.

It may have seemed odd that such a stalwart of the Ladies European Tour was faced with the unpredictable process of qualifying, but the fanatical Liverpool supporter is now sitting at 423rd on the Rolex World Ranking and sits at 60th on the LET's Order of Merit following a disappointing missed cut in the Ladies' Scottish Open at Dundonald last week.

"I’ve played in the last 36 Opens and have never had to qualify so this is a new experience for me," Davies remarked after completing her morning round on the Castle Course. 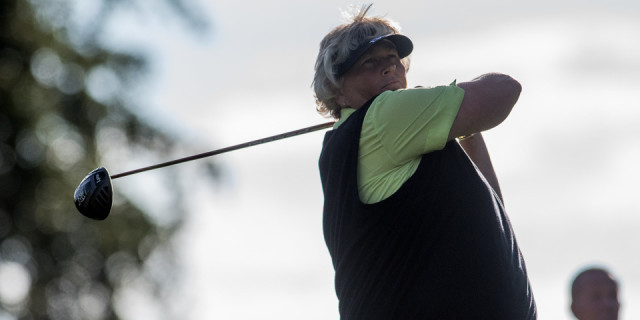 Her triumph at Royal Birkdale in 1986 - long before the majority of the field had been born - was just the sign of what was to come from a powerful and prodigious talent. Back then, the Women's British wasn't a major championship, but Davies' significant breakthrough came just a year later on winning the 1987 U.S. Women's Open. Later successes followed with two Women's PGA Championship titles in the 1990s and a du Maurier Ltd Classic in Canada completed her quartet of grand slam accolades.

Those achievements - not to mention her record in the Solheim Cup - saw her enter the World Golf Hall of Fame, coincidentally inducted at St. Andrews in 2015. Though absent for that ceremony, Davies is back on the east of Scotland looking to be more than just a ceremonial player. Yes, she is more than double the age of the favourites at the links now considered a modern classic, but that determination - and not to mention those long drives - remain intact.

But Davies was the story. 37 years on, the Great Dame of British Golf is still transcending generations.