Jordan Spieth will take a three-shot lead into the final round of The Open Championship at Royal Birkdale. On an astonishing day, Branden Grace, of South Africa, wrote himself into the history books with a round of 62.

Spieth, a two-time major champion, holds a three-shot lead over Matt Kuchar, a man who has more than 80 top-10 finishes to his credit. Spieth produced a grandstand finish, holing a 25-foot putt on the final green for a 65 and a 54-hole total of 199, 11 under par. Kuchar is on eight under after a 66.

For most of the day, conditions were perfect, with no wind to protect the links. More than half the field broke 70 on a course that was there for the taking. 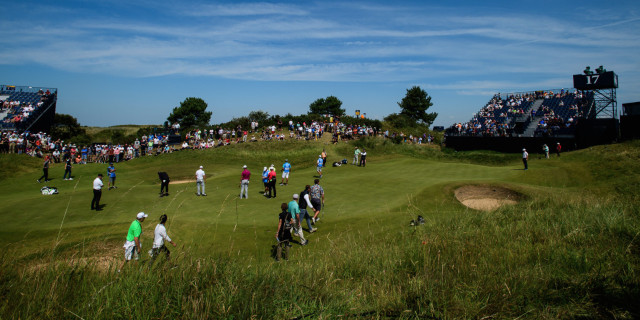 The scoreboard was a sea of red figures as player after player peppered the flags. There can scarcely have been a day like it at any major championship and for Grace it was one that he will never forget. He reached the turn in 29 shots and added further birdies at the 14th, 16th and 17th holes. Grace required a par at the last to shoot a 62, the lowest recorded in any major. He fired his approach way over the back of the green but then produced a glorious putt that finished inches from the hole. He tapped in and struggled to hold back the tears as he walked off the green.

He later insisted that he had no idea he had broken the record until being told by his caddie. Having started the day four over par, he finished it four under, but he has a mountain to climb if he is to lift the Claret Jug later today.

Spieth won The Masters and US Open in 2015 and will be looking to complete the third leg of a career Grand Slam today after a wonderful third round, during which he went head to head with Kuchar for 18 holes. Spieth drove the ball superbly and was seldom in trouble. He putted beautifully to reach the turn in 31 but he couldn't shake off 39-year-old Kuchar, who also took 31.

The turning point came at the par-four 16th, which Spieth played perfectly for a par four. Kuchar missed the fairway, couldn't find the green with his second and took four more to get down. Suddenly, Spieth was three shots in front. Austin Connelly, a 20-year-old Canadian, is third on six under par after a 66.


Brooks Koepka, the US Open champion, is tied for third on six under par with 20-year-old Canadian Austin Connelly.

"There is nothing like the amphitheatre of walking down the 18th fairway at The Open Championship. The crowd are so knowledgeable and the atmosphere is fantastic," Spieth said. "My goal had been to score a 66 today and I bettered that by one shot. I am not going to get ahead of myself. I have had a five-shot lead in a major before and blown it, so I will not be thinking about winning this tournament.

"In the final round I will go out there with a plan and I will keep an eye on the leaderboards and hopefully I will be walking down that final fairway with a smile on my face."

Kuchar said that he played well and was pleased with his 66 - and why wouldn't he? "I am swinging the club well right now and feel in control," he said. "Jordan and I pushed each other on and at one point we weren't sure whose honour it was because there were so many birdies going in.  I feel that I have had a great career and my game continues to evolve. We come out here to win major championships and to win this one would be awfully special to me."