WITH barely a breath of wind, the early starters had Birkdale at their mercy. The rain had softened the links and the course had never looked better, or more inviting. On day one, Matt Kuchar, Brooks Koepka and Jordan Spieth each reduced Birkdale to 65 blows, and yesterday's conditions were even better.

In a field of 77, only 11 shots separated first from last at the start of play so everybody knew that a good round could change everything. There were plenty of birdies and, to the delight of the thousands of local spectators who flooded in to watch Tommy Fleetwood attempt to rescue his Open challenge, the Southport golfer was one of those who was producing them. He made the worst possible start, dropping a shot at the opening hole, but then he got into his stride and birdied the second, fifth and eighth holes to move to three over par. 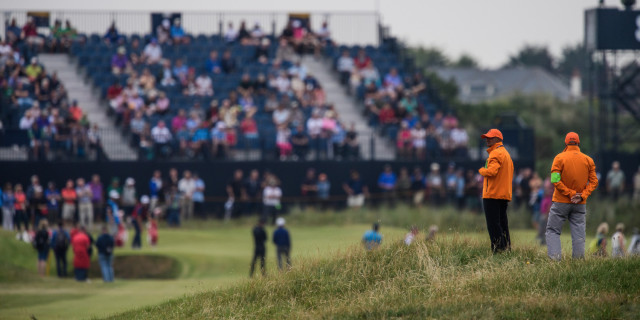 He reached the turn in 33 after a dropped shot at the ninth and after four pars he birdied the 14th and then holed a putt for an eagle at the par five 15th to get back to one over par. The noise when that putt fell into the hole was as loud as any heard during this championship. His 66 was 10 shots better than his score on day one.

Branden Grace is a noted exponent of links golf and he found the conditions absolutely to his liking. He was four over par when he stepped onto the first tee. By the time he reached the turn he was one under and in a tie for sixth place. The South African's putter was red hot as he birdied the first, fourth, fifth, eighth and nine holes to go out in a scarcely credible 29. His playing partner, Jason Dufner, was just two shots worse.

When Grace birdied the par-three 14th he was six under for the day and required two more birdies to record the lowest round in major history - and two of those holes he still had to play were par fives. Ten players have shot 63 at The Open. Indeed, two of them were achieved last year at Troon, by Henrik Stenson and Phil MIckelson. Nobody has ever managed a 62 until now.

Almost inevitably, Lee Westwood began to make a move. The 44-year-old Englishman has had 18 top 10 finishes in majors but barely made the cut here. He hits the ball as well as he ever has but has suffered on the greens in recent years. This was a day when the putter was hot though and after birdies at the fifth, sixth and ninth, the veteran had reached the turn in 31, but his hopes nosedived when he became the latest victim of the par-three 12th, dropping two shots. He would eventually settle for a 69.

Former world No 1 Jason Day also turned in 31 and moved to one over for the week when he added another birdie at the 10th. Another birdie came at the 15th. It all added up to a 65 and it took the Australian to level par.

You can be forgiven for not having heard of Shaun Norris. He is a 35-year-old South African who makes his living on the Japanese Tour and gained his place in the field here by virtue of the fact that he leads their money list. Norris was out first, playing with a marker, and birdied the first, third, fifth and 10th holes to move to one over par, level with Day and Fleetwood. Another birdie at the 17th meant he was back to level par, just six behind Spieth. He parred the last for a 65 and showed everybody what could be done. Norris was in the top 10 - he surely wouldn't still be there at the end of the day.

And then there was Dustin Johnson. The world No1 has endured a pretty lean time of it since injuring himself on the eve of The Masters, and there was little in his play over the first two days to suggest that much had changed, but he birdied the first and fourth and then had a huge slice of luck at the fifth, where his drive rebounded off a grandstand onto the green and he two-putted for another birdie. He added another at the eighth, turned in 30 and had progressed to one under par.

Alfie Plant, the only amateur to make the cut, delighted his army of fans with a 69 and heads into the final round just three over par.

When Jon Rahm won the Irish Open he seemed to hole every putt he looked at. That he found himself starting the day on three over par was almost entirely due to the fact that he had been unable to make a putt worth the name and when he left his birdie try at the first hanging on the lip, it seemed that we were going to see more of the same.

The most unlikely pairing of the day was surely Adam Scott and Andrew "Beef" Johnston. Scott is a tall and elegant Australian with a beautiful golf swing and a sense of style. Johnston is none of these things. He is overweight, his clothes never seem to quite fit and he has an unkept, straggly. But you do wonder which of the pair enjoys life more. A smile is never far from Johnston's face - and the boy can play.