Rory McIlroy overcame a horror start to the 146th Open Championship at Royal Birkdale with a thrilling back-nine to keep his hopes of securing the Claret Jug for a second time just about alive.

His chances were unquestionably on life support following a disastrous beginning that saw the four-time major champion five shots above par after just six holes on Thursday morning, prompting the Northern Irishman’s long-serving caddie JP Fitzgerald to exclaim on the sixth tee: “You're Rory McIlroy, what the f*** are you doing?”

Quite an intervention from the bagman who has frequently been a target of criticism through the years by a variety of commentators, but it was an effective one. The 28-year-old was quick to praise the presence of Fitzgerald in helping him to rebound with a back-nine that illustrated a praiseworthy sense of resolve and determination to turn around what could have been an irretrievable situation.

Typically candid with the press afterwards, McIlroy confessed to feeling anxious early on following a disappointing run of tournaments that had seen him miss the cut at the U.S, Irish and Scottish Opens in the past month or so.  “I was nervous going out. I was a little anxious, timid. Just not probably just not as much belief in myself as I should have had. JP gave me a good talking on the second tee box, and sort of reminded me of where I was. That helped, that got me back in a positive frame of mind. I had a good pitch shot on 7, even though it didn't hit the green. It was better strike, better golf shot. And then I took a little bit from that. From there it was it's 12 holes and try and emulate that.” 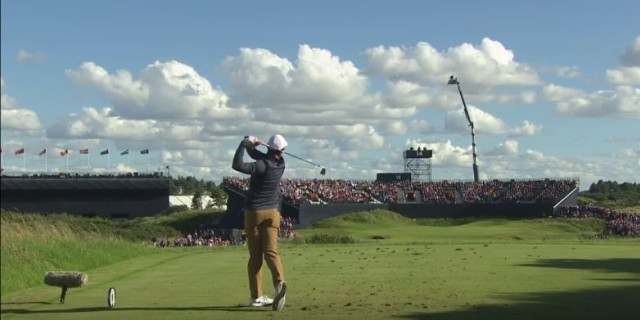 Making an important par save on the seventh (and then again on the eighth) – following a sequence of four straight dropped shots – was crucial in changing his fortunes on the opening day of the game’s oldest major. “There's a big difference between 5-over par and 6-over. And that was big. And then I started hitting some real quality shots coming in. Hit two good shots into 9. And then I started to hit a lot of greens and give myself a lot of chances. It was a big momentum, if you can say you have momentum being 5-over after 7,” he added.

From there he built a forward progression, making his first birdie of the day on the 11th, before following that with further gains on the 15th, 17th and 18th, which each holed putt edging him back within touching distance of the leaders. It was a back-nine of 32 – the best of the day from anyone – and may just be the catalyst for a shot of positive form into the coming days for the leading player of his generation, who has balanced a frustrating season dominated by several changes, whether it be equipment, a recurring injury, and indeed marrying earlier this year.

3 birdies in 4 holes put @McIlroyRory right back in it!
Sky Sports The Open now.
Brought to you by @TaylorMadeTour. https://t.co/uj6alDvD4A

“I'm really happy with what I've done this afternoon after the start, said the 2014 winner at nearby Hoylake. “If I go out tomorrow under bad conditions and shoot something in the 60s, I feel like I'll be right there for the weekend.”

That expected wind and rain should make for a fascinating second round, but it’s an opportunity for McIlroy to make a statement early on Friday. He’s shown flashes of his magical and imperious best recently without putting that together into anything substantive. Perhaps Royal Birkdale is the stage for this extraordinary talent to remind us all what he is capable of under the clouds of Southport.