AMERICAN golfers dominated the opening round of The Open Championship, with US Open champion Brooks Koepka and double major champion Jordan Spieth both overcoming tricky conditions to reduce Royal Birkdale to 65 strokes. As good as that was, Matt Kuchar threatened to overshadow them both when he raced to the turn in 29 strokes in the best weather of the day. He birdied the second, fourth, fifth, sixth and ninth. He then parred his way in to join Spieth and Koepka. 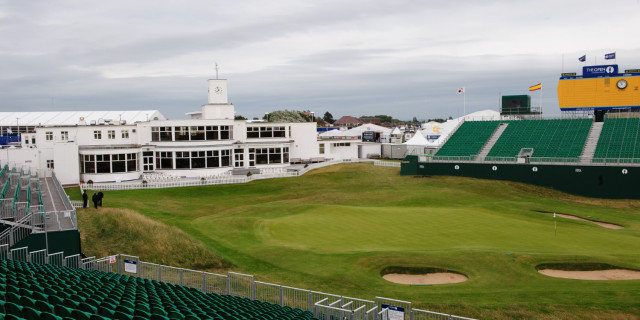 Justin Thomas, who dominated the early part of the PGA Tour season, took to the course wearing a shirt and tie, and finished with a 67, the same mark as Ian Poulter. For Poulter, it was a terrific effort. After missing most of last season and struggling for much of 2017, he had to qualify for the tournament at Woburn and has since rediscovered his form and confidence.

The first day of the tournament produced all four seasons, with the early starters going out in wind and rain before the clouds rolled back and the sun emerged. With the course in superb condition, the players wasted no time producing some extraordinary golf.

Chris Wood, who finished one over, paid tribute to Poulter They played together in the final round nine years ago. Wood said: "I played with him last week  and he was threatening the leader. He was playing lovely and he's coming back."

Poulter's 67 came in the worst of the weather. Out in 32, home in 35, the 41-year-old Englishman had four birdies and a solitary bogey in a first round which spoke volumes for his determination to get off to a good start. Poulter was runner-up to Padraig Harrington the last time The Open was played at Birkdale. He missed last year’s Open because of injury and this year, having fallen outside the world’s top 50, he had to go through qualifying to get into the field. If he had a stroke of luck it was that the qualifying event he entered was played on his home course at Woburn.

"I struck the ball well and I putted well," Poulter said. "The key to my score was that I gave myself lots of chances and didn't get into trouble."

The best Briton was Paul Casey, who had five birdies and dropped a solitary shot in a fine 66. Stuart Manley, a 38-year-old Welshman, was one of the early starters and had a finish to remember, with an eagle at the 17th, where he holed a bunker shot, and a birdie at the last to complete a two-under-par round of 68.

“I was standing there shaking on the first tee,” Manley admitted. “I was amazed I made contact with the ball to be honest. To see the ball staying in bounds was a relief. I scraped a five and then plotted my way around for the next few holes. I gradually grew a bit more comfortable and was delighted to finish the way I did.

“I hit a great drive down 17 and a lovely five-iron approach that was all over the pin before it kicked right and rolled into a bunker. I got a poor lie but it was one of those I knew would feed all the way to the hole as long as I got it out, which it did.”

Manley qualified to play in The Open after finishing in a tie for second place at the Joburg Open in February, but it would be fair to say that his season has since stalled. Coming into The Open he had missed six halfway cuts in succession on the European Tour.

Spieth only hit 36% of fairways, but he produced some magnificent iron shots and putted superbly. He had five birdies and didn't drop a single shot. Kopeka birdied the eighth, 11th, 12 and 13th holes and after dropping a stroke at the 16th he picked up an eagle at the par-five 17th for his 65.

Thomas said: "I played really well today, and I could have scored even better. I enjoyed wearing the shirt and tie - it is not the sort of outfit I would wear every day but The Open Championship seemed to be the right tournament to try it out."

Sadly, Rory McIlroy's struggles continued. Having missed three of his past four cuts, the Northern Irishman arrived at Royal Birkdale low on confidence. And while all around him were making birdies and eagles, he found himself five over par after just six holes. But he dug deep on the back nine and finished with a 71.

It was also a poor day for local favourite Tommy Fleetwood. One of the pre-tournament favourites, the Englishman battled with his swing all day and eventually signed for a miserable 76.

Mark O'Meara, the 1998 champion, hit the opening shot at just after 6.30am - and it was a stinker. He drove into bushes and finished up with an eight. It didn't get much better, and he finished last in the field with an 81.