Ten of the Most Difficult US Opens

The U.S. Open has long championed its hard-fought reputation as being the most difficult of golf's four major championships, with the USGA attempting to make par "relevant" as the world's best players take on a course that has historically been configured with narrow fairways, thick rough and fast greens.

We've often seen great golfers reduced to being hackers, which has long amused those of a more sadistic persuasion. Many love the extreme test, while others believe the organisers have frequently restricted the talents of their field and have produced an event that is attritional, rather than entertaining.

However, in more recent years there has been an effort to change much of that identity, with the likes of Pinehurst No. 2 and Chambers Bay offering wider fairways, less long grass and a more expansive "examination" as the USGA likes to put it. This has come with mixed success, and this week's venue Erin Hills is in than that mould, despite the ominous fescue grass that has generated some interest in the buildup to the 117th edition of America's national championship.

Former winner, Jordan Spieth expects a winning score of between five and ten-under par on Sunday, which would carry on the numbers of the past three editions. We have delved into the archives to discover the times that the trophy was secured with a four-round total on the wrong side of par. Or, the right side, if you're part of the USGA. 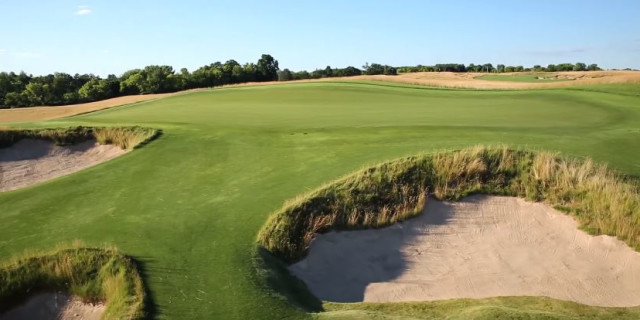 Edinburgh-born Tommy Armour won the U.S. Open in a playoff over Harry Cooper at Oakmont, which was hosting the championship for the first time. With a winning score of +13 and the halfway cut falling at +19, it's easy to see why the Pennsylvania venue quickly developed its fearsome reputation.

Former USPGA winner, Olin Dutra managed to overcome illness and an eight-shot deficit afer 36 holes to win at historic Merion, finishing one ahead of the legendary Gene Sarazen - who had led by three strokes entering the final round.

Back at Oakmont, 25-year-old club pro Sam Parks Jr fended off the challenge of Jimmy Thomson and Walter Hagen to win, having spent a month playing practice rounds before the championship. The hard wok paid off.

Creating one of the most iconic photographs in golf history, Ben Hogan picked up hs second U.S. Open title in a playoff at Merion, comfortably defeating Lloyd Mangrum and George Fazio over 18 holes.

Unheralded, Jack Fleck's playoff victory over Ben Hogan remains one of the game's biggest upsets, and it required brilliance at a punishing Olympic Club in California. Recording a fourth round of 67 to tie golf's finest player, the club pro from Iowa shot a 69 over the resulting 18 holes to achieve a famous triumph.

The Country Club at Brookline had seen the extraordinary success of Francis Ouimet half a century previously, and it remained a stiff challenge 50 years later, with Julius Boros winning a playoff over Jacky Cupit and Arnold Palmer.

Described as "The Massacre at Winged Foot", this U.S. Open defined the identity of the championship, as Hale Irwin picked up the first of three titles following an arduous four rounds dominated by high scores.

Back at Winged Foot, thick rough led to brutal scoring conditions culminating on a dramatic Sunday that saw Colin Montgomerie, Phil Mickelson and Jim Furyk all throw away a chance to win. Australia's Geoff Ogilvy took advantage of that situation to secure his only major title to date.

Tiger Woods failed to win from the final pairing, as Angel Cabrera shot a brilliant round of 69 (despite three bogeys) to claim the U.S. Open for Argentina after a punishing week at the famous venue.