Noren is the Master of all he surveys

Post by Sports Writer Derek Clements at the 2016 British Masters

ALEX NOREN survived a mid-round wobble to win the British Masters at The Grove by two shots. It was the Swede's third victory in eight starts and it takes him into the world's top 20 for the first time in his career. A final round of 69 gave him a 72-hole winning total of 266, 18 under par.

He was thrilled with his performance. "It was a tough day, with some wind out there and at one point I didn't think I was going to win," he said. "Winning three times feels unreal. I have worked very hard this year and it has all come right for me. The course has been fantastic all week and so have the fans, whose support has been just amazing." 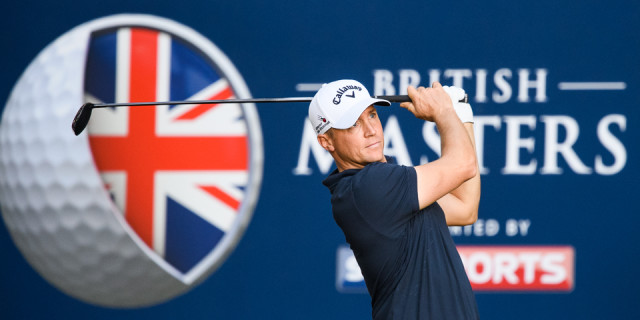 But for Richard Bland, of England, the wait for a first career success continues. Bland, 43, began the day three shots behind Noren. He needed a fast start and got it with a couple of early birdies. The problem is that the Swede did precisely the same thing, with birdies at the first and second. He was 18 under and still three ahead.

He was coasting and looking like a shoo-in for his third victory of the season, but then it all started going wrong. He dropped a shot at the eighth and another at the 11th and with playing partner Bland picking up a birdie at the eighth, the Swede's lead was down to a single shot. And Bland wasn't his only challenger.

Bernd Wiesberger and a resurgent Tommy Fleetwood had both picked up three shots and joined Bland on 15 under. Things looked like getting an awful lot worse for Noren when he came to the 12th hole and carved a three wood miles right. He was lucky not to find the stream, but was blocked out for his approach by a huge oak tree and was facing a make-or-break shot that had to carry a lake and move 30 yards from left to right in order to find the green. He hit a wondrous shot, the best of the day, to not only find the green but leave himself only 20 feet from the hole and a guaranteed par to stay ahead.

It was also good to see Lee Westwood finding some form after his bitterly disappointing experience at the Ryder Cup. He birdied the first, dropped a shop at the third, but picked up further birdies at sixth, ninth and 10th. Another shot went when he left his ball in a fairway bunker at the 12th but he got the shot straight back at the 13th to move to 14 under, two behind the leader.

Fleetwood, playing with Wiesberger, made a huge mistake at the par-three 13th when he underclubbed and found the stream in front of the green. It cost him a shot and he fell back to 14 under, two behind Noren.

Wiesberger was playing the best golf of anybody on the leaderboard, consistently finding fairways and peppering flags, but the Austrian couldn't buy a putt. Of those on the leaderboard, only Noren and Peter Hanson, of Sweden, were not under par for the final round - Noren was level, Hanson one over and going backwards in a hurry.

Noren had a chance of a birdie on the 13th after a fine tee shot but he couldn't take advantage. If Bland was being affected by nerves then he wasn't showing it and he hit a splendid shot to the 14th but his birdie putt slipped agonisingly wide of the cup.

The Swede had company at the top when Wiesberger finally holed a birdie putt at the par-five 15th to move to 16 under, and Fleetwood followed him in to return to 15 under, alongside Bland. But the young Englishman gave it straight back to effectively end his challenge for the title.

Noren hit a dreadful drive at the 15th, topped his second and did well to find the green in three, leaving the ball 15 feet from the hole and, wouldn't you know it, in went the putt for the most unlikely of birdies to go back in front at 17 under. Bland, who played the hole perfectly, missed an eight-footer for birdie and, against all the odds, Noren went to the 16th tee two ahead.

Bland came up short at the 16th, hit a poor chip and dropped a shot to fall back to 14 under, tied for third with Fleetwood and Westwood. Sadly, his race was run, and the only man who could catch him now was the big-hitting Wiesberger, who went to the par-five 18th one adrift of Noren, who parred the 17th.

The Austrian hit a glorious drive and went for the green in two but found a bunker instead and came out to about 15 feet. For Wiesberger, the putt was simply a must, especially with Noren waiting behind in the middle of the fairway. He had to settle for a par and a final round of 67.

Fleetwood dropped two shots in the last three holes to fall back to 13 under, while a birdie at the 18th saw Westwood finish in third place on 15 under par after a 67.

Bland, needing a birdie to claim fourth on his own, sliced his second but hit a wondrous pitch to three feet but he missed the putt. A good late run by Hanson saw him end the week in a tie for fourth with Bland, Alexander Levy, Graeme McDowell and Fleetwood.

Noren, meanwhile, was short of the 18th in two and almost holed his third. Birdie four, 18 under par. Job done.

Tyrrell Hatton, winner of the Alfred Dunhill Links Championship last week, had another good tournament and finished inside the top 10.

Eddie Pepperell finished in a tie for 21st place, just enough to get him inside the top 110 in the Race to Dubai, and he has probably done enough to retain his playing rights for next season, as has Scott Jamieson of Scotland, despite a final round of 73.

Westwood was pleased with his play. "I take a lot of positives from the week. I hit a lot of good shots, drove well, hit some lovely iron shots and holed a few putts," he said. "In the end, I just didn't hole enough putts from 10-15 feet. The crowd have been amazing all week and have given us all some fantastic support.

"There are some big events coming up and I am looking forward to it all."