Back in 2013 BIGGA conducted a survey among its members, and unsurprisingly the overriding opinion of greenkeepers was that golfers should have to pass a test on golf course etiquette, before being allowed out to play 18 holes.

While those BIGGA members may – or indeed, may not – have been tongue-in-cheek with their responses, it just goes to show that greenkeepers can grow frustrated at the lack of due care and attention shown by golfers to the course, which the team put all their hard work into preparing to the highest standards.

Did you know that more than one in three greenkeepers work at least 50 hours a week during summer?

And did you know this number could be reduced if golfers did their part?

Some basic tips that can help reduce the damage caused by playing golf are set out in Section 1 of the Rules of Golf and include:
• Rake bunkers
• Repair divots, ball marks and damage by shoes
• Avoid unnecessary damage such as divots caused by practice shots or hitting the head of the club into the ground
• Don’t lean on your club when on the green, and don’t use your trolley or place your bag on the green
• Make sure the flag is removed carefully and replaced properly before you leave the putting green

Golf courses are usually at their busiest during summer, but that’s also when greenkeepers have the most work to do.

Some courses prefer their greenkeeping team to remain unseen, but for many there’s no getting around the amount of work they need to complete each day.

This means greenkeepers will be out on the course at the same time as golfers are, and occasionally, there’s no escaping that play may be held up while one of the greenkeepers goes about his duty.

Safety on the course applies to greenkeepers as much as it does other golfers or members of the public, so players should wait until the way ahead is clear before playing a shot.

And this means if a greenkeeper is mowing a tee or green, they have the right to complete the job before you can play from the spot.

Golfers have a duty of care not to put others at risk as a result of their actions, all of which is covered in the Etiquette: Behaviour on the Course section of the Rules of Golf. 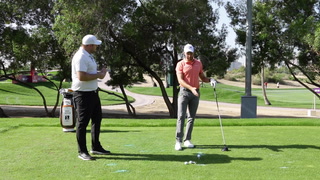 Driving Tips: How To Drive It Low Off The Tee - Max Kieffer