A Great Greek Resort Good Enough for the Golfing Gods

Rather embarrassed by Brexit and saddened at passing through the EU passport channel at an overseas airport for possibly the last time, my pride in being British is at least temporarily restored when learning of the important part our navy played in the Battle of Navarino in 1827. One of the last great naval engagements involving sailing ships, together with our French and Russian allies we destroyed the Ottoman and Egyptian fleets thus facilitating the emergence of an independent Greece. There aren’t many places you can go where past British military intervention is looked upon locally with genuine gratitude and so I will make the most of this one.

Ironically, looking out over the blissfully tranquil bay from the balcony of my supremely comfortable suite in the Romanos at Costa Navarino, it’s hard to imagine a more peaceful scene. To my right is a vast bird sanctuary where something like 400 species pass through on their way to and from Africa without ever having to worry about passport control. 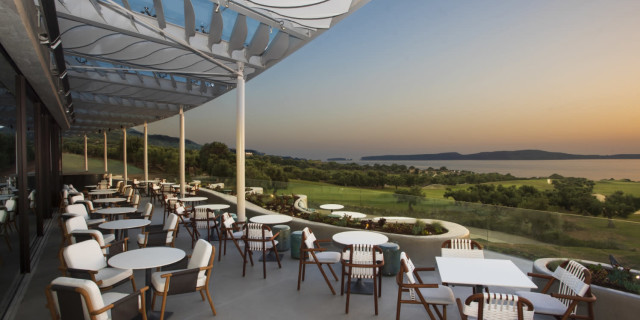 Beneath me is a kilometre-long stretch of a glorious sandy beach and the turquoise water of the Ionian Sea. Perhaps it’s time to reveal more precisely where I am. Obviously Greece but whereabouts exactly? So, following the history lesson, here’s a bit of geography. Costa Navarino is in the Messinia region in the southwest Peloponnese. It’s about 170 miles south-west of Athens and so Kalamata airport, which is only 30 miles away, is the one to aim for. It’s a wonderfully quiet corner of the country and much closer to nature than bright lights, In fact, there are no bright lights so as not to distract the turtles who annually clamber up the beach to lay their eggs. And because there is so little ambient light, star-gazing is a popular nocturnal past-time.

But there are loads of other activities for both adults and children, which is the key to the enormous appeal of this fabulous family destination. Foremost amongst these is golf. When it comes to the Royal and Ancient game Greece, it has to be said, lags several holes behind the rest of Europe, which is somewhat surprising for a sporty nation responsible for inventing the Olympic Games. If only one of the Greek gods had smashed a small rock across the Aegean and straight into a hole on Mount Olympus, things might have been very different. As it is, Greece has only a handful of courses and two of the very best are right here in Costa Navarino.

The distance of a modest par five from the Romanos and bang next door to the other five-star hotel at Costa Navarino, the Westin, the Dune is the older of the two. By the way, since both the Romanos and the Westin are full-blown resorts in their own right, Costa Navarino would rather be described as a destination than a resort. Okay?

Back to the Dunes. Designed by Bernard Langer, it gently rolls through olive and citrus groves and players are welcome to help themselves to whatever fruit is available. There’s a lake on the left of the opening hole but, thankfully, there are no other water hazards on this delightfully open course. So instead of worrying about water, you should focus on the fiendishly subtle borrows on the greens, the menacing bunkers and, most important of all, the splendid views up to the mountains and down to the sea.

A shuttle-bus whisks you ten minutes along the coast to the Bay course. Opinion is evenly divided as to which is better, the Dunes or the Bay? For those who like to walk, the less strenuous Dunes edges it but, because it runs along the edge of the sea for a couple of delightful holes and the views across the water are marginally prettier, the Bay is frequently preferred. And the appeal of this Robert Trent Jones Junior design has just been further boosted by the opening of a stunning new clubhouse.  Virtually buried in the hillside beneath a turf-covered roof, it’s almost impossible to spot and yet its wide-angled lounge and terrace affords sweeping panoramas over the entire Navarino Bay.

The debate as to which is the best course will soon become more complicated as two new challenges a little further along the coast are scheduled to open in a couple of years. Designed by José María Olazábal, adjacent to one another, astride a mountain and benefiting from plenty of elevation, they will weave through woodland and provide yet more spectacular views over the bay and beyond. Construction work is already underway and my firm hunch is that they’re going to be a couple of crackers.

Non-golfers need not worry about finding things to do whilst their partners, parents or children are bashing balls as there are numerous options on offer in this sporting paradise. If you’re one to wield a racket, there are plenty of tennis, badminton, squash and padel courts. If you like getting wet, there’s surfing, kayaking, yachting, snorkelling, scuba-diving and innumerable swimming pools. Cycling is enormously popular and most of the mainstream sports are available; there are even two ten-pin bowling lanes! Children are very well looked after, both metaphorically and literally, and it’s not just for jocks as the non-sporty have not been forgotten.

As well as a wide range of first-class restaurants, there is a whole host of activities and courses on offer. Whereas before you could honestly have described me as a super virgin on the subject, following a fascinating talk and tasting, I now regard myself as something of an authority on olive oil. And if, as I do, you prefer wine to salad dressing, you can indulge yourself under the pretext of education. Bake bread if you want to, attend Greek theatre workshops, take a botanical tour, study the stars, unearth archaeology or simply relax in one of the bars or on the golden beach.

Unambiguously cerebral and entirely appropriate in the country that gave us both Aristotle and Socrates, are the philosophy walks. I thought too long and hard about whether or not to go on one, missed it and visited the superb spa instead. Sitting in a room full of fragrant steam is remarkably conducive to intelligent reflection. Because the poor visibility conceals the identity of whoever is talking, holding the philosophy sessions in a steam room might encourage the more self-conscious to speak out.

Indisputable, however, is the incontrovertible fact that Costa Navarino is a magnificent place that caters perfectly for the discerning golfer who wants more than just a quiet time.

For more information and packages to Costa Navarino, visit Golfbreaks.com.