The 2008 U.S. Open was Tiger Woods' 14th and last major championship victory. Despite the incredible success that had come before, it may have also been his most impressive triumph. Take a look back at that thrilling week.

Returning to competitive golf two months after knee surgery, Woods defied medical advice to participate in the championship at Torrey Pines, a course that had deep meaning for him. Battling crippling pain throughout, the world number one produced a remarkable finish on the Saturday - with two eagles and a chip-in birdie - to lead after 54-holes from Lee Westwood, with veteran American Rocco Mediate a shot further back.

During an exciting Sunday, Woods gave up his lead early on with a double bogey on the opening hole, while the 45-year-old Mediate - seeking an unlikely major win - had edged ahead with a solid round. However, the five-time PGA Tour winner failed to birdie the last two holes, which gave both Tiger and Westwood a chance to tie with birdies on the par five 18th.

The Englishman failed to make his putt, but the 13-time major champion did.

Returning for the 18-hole playoff of Monday - further strain on Tiger's leg - it was a tight contest between the two. Woods at one point was three shots ahead, but Mediate birdied the 13th, 14th and 15th to swing the match around. One ahead on the 18th hole, Rocco had another chance to win his first major, but, like the previous day, Woods holed out for birdie to take the playoff to an extra hole.

This is where the marathon concluded, with Tiger's par enough to secure a dramatic and thrilling 14th major. Soon after, he would undergo further surgery and miss the rest of that season.

It was his final major victory, arguably his most impressive, but the extraordinary resolve he displayed to win may have just had long-term consequences that harmed the years that followed. 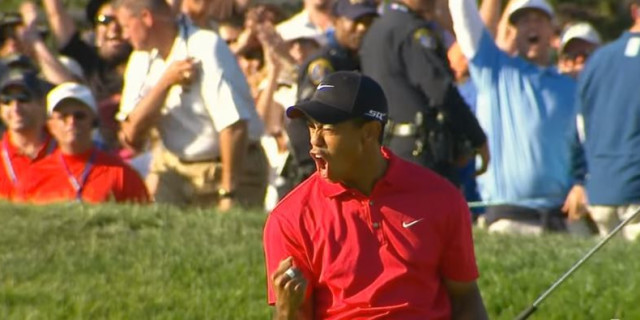