Troy Merritt gained his first PGA Tour title with a three-stroke victory at the Quicken Loans National thanks to some scintillating iron play over the weekend using the Wilson Staff FG Tour V4 irons (5-PW) and FG Tour TC wedges. 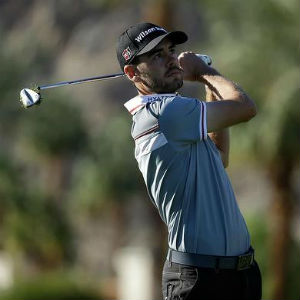 form into the final round posting a 4-under 67 for a first career win in 96 starts.

Having joined the Wilson Advisory Staff in January this year Merrit made the immediate switch to the FG Tour V4 irons and at the Humana Challenge, his first tournament playing Wilson Staff equipment, he was the leader heading into the weekend rounds. He also claimed his first top-five finish at the RBC Heritage in April.

“Obviously I am very pleased with my equipment change this year,” commented Merritt.

“These irons have given me the ability to set myself up for birdies and tap-in pars that allow me to do things like secure my first win on tour. I am looking forward to many possibilities to come.”

“Since he has switched to our brand, he has been an extremely helpful addition to our Wilson Advisory Staff, with constant feedback and interest in developing prototypes.

The FG Tour V4 irons, designed as a precision line for Tour players are the latest forged irons from the brand with more Major wins than any other (61), and are seen as a reliable option for all elite golfers looking for exceptional feel and greater ball flight control.

They incorporate an 18-gram tungsten sole weight from the low irons through to 7-iron, which lowers the centre of gravity and increases the launch angle without added spin. This results in greater height on long and mid-iron shots, making it easier to attack the most difficult of pins.

Merrit also had The Wilson Staff FG Tour V4 utility irons (2 and 4) in his bag which are designed to help better players hit long shots into greens and control ball flight in the wind. Featuring similar cosmetics to the V4 iron, they incorporate a 7-gram adjustable weight in the centre of the sole to enable golfers to fine tune ball flight with personal fittings depending on the course conditions.

The win at the Robert Trent Jones Golf Club moves Merrit into the top-100 in the World rankings which qualifies him for the USPGA Championship this month and the US Masters next year as well as this week’s World Golf Championships-Bridgestone Invitational .

For more information about Wilson Staff and the clubs used by Merritt, visit www.wilson.com.