GET ready for some fun and games as Jordan Spieth goes for his second successive major in the company of fellow American young gun Patrick Reed at Chambers Bay. Spieth was largely overlooked in the build-up to the US Open but he maintained his composure on a trying day as all those around him lost their heads during the second round of the US Open.

And American golf fans can hardly contained their excitement, with the big-hitting Dustin Johnson on four under par, a shot behind Spieth and Reed. 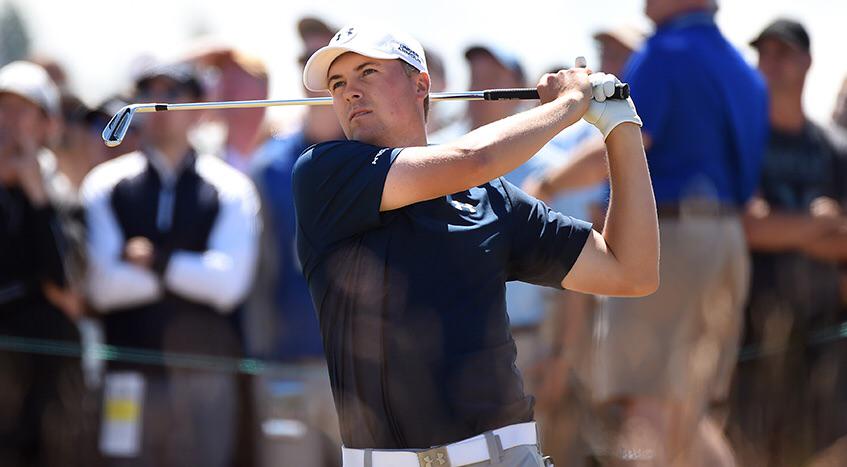 Henrik Stenson followed his opening 65 with a 74 and described the conditions as "borderline laughable", adding that the greens were like putting on the moon and that the surfaces were like broccoli.

“The way we’re playing this course in the afternoon compared to the morning, it’s borderline laughable at some of the greens and some of the pin positions, when we’re actually almost better off plugged in a bunker than being on the top of a ridge, like on the fourth,” Stenson said.

“And it’s pretty much like putting on broccoli, as well. If you’re doing any good in this championship you’re playing late in the afternoon and it’s going to be more like we had today. So it’s obviously good practice for the next couple of days.”

“I kind of lost my patience on the eighth more than anything and hit a lovely shot into nine and was putting down on something that looked like the surface of the moon."

The halfway cut fell at five over par and meant Sergio Garcia, Ian Poulter and Colin Montgomerie all survived on the mark, Montgomerie dropping three shots in his last four holes in a 76.

World number one Rory McIlroy had threatened to get into contention when he eagled the 12th and birdied the 15th, only to four-putt the 17th and drop another shot on the last. A second consecutive 72 left McIlroy four over par and nine shots adrift. On an ordinary golf course, he might fancy his chances of making up that ground over the weekend, but this is not an ordinary golf course, and the USGA are certain to find some even more improbably pin positions over the closing 36 holes.

Spieth is looking to become only the sixth man, after Craig Wood, Ben Hogan, Arnold Palmer, Jack Nicklaus and Woods, to win The Masters and US Open in the same year. he can also become the first player since Gene Sarazen in 1922 to win multiple majors aged 21 or younger - all of a sudden, McIlroy must be feeling pretty old.

Reed and Johnson both reached seven under par before dropping shots in the tougher afternoon conditions, with Johnson carding three bogeys in his last five holes to finish four under par alongside South African Branden Grace.

Starting on the back nine, Spieth birdied the 10th, 14th, 15th and 17th - he also three-putted the driveable 12th for par after missing from two feet - before running up a double-bogey six on the par-four 18th, which played as a par five in the first round and par four in the second.

“I think 18 as a par four doesn’t make much sense,” Spieth said. “You can hit it down the left centre of the fairway and still end up in the right bunker in trouble. There’s a group of about 10, 12 guys that can fly it 310 yards they have an entirely different hole to play there. For anybody else you have to hit it in a five or six-yard area.
“So all in all I thought it was a dumb hole today, but I think we’re going to play it from there again, so I’ve got to get over that.”

Spieth led from start to finish when winning the Masters in April, setting new 36 and 54-hole scoring records and becoming the first player ever to reach 19 under par at Augusta.

“I’ll probably draw a significant amount off it (although) it’s playing different and I’m in a very different position,” he added. “I’m not going to have a four, five-shot lead.
“I know that it’s going to get tougher and tougher, so I’ll draw some on Augusta, but at the same time my patience level has to be even that much higher. I’m not quite putting myself in the same positions off the tee, so I’ve got to be a little more methodical.

“At Augusta I was finding fairways, hitting it on the green and I was making everything. That would be nice here if I could do that, but it’s a harder golf course than the Masters played this year.”
As rookies, Spieth and Reed combined to win two-and-a-half points from three matches in the Ryder Cup at Gleneagles and also contested a play-off for the Valspar Championship earlier this year, won by Spieth.

“It’s going to be fun,” Reed said. “Any time I play with Jordan I enjoy it. The main thing for me is to stay focused and focus on what I need to do to play some good golf and plot my way around this course, especially if it gets firmer and faster and knowing where to leave the ball"

Woods added a second round of 76 to his opening 80 to finish 16 over par and in a tie for 150th.
“I hit a little bit better today,” said the former world number one, who won the last of his 14 major titles in the 2008 US Open. “But again I made nothing today. I didn’t make any putts the first two days.
“On a golf course like this you get exposed and you have to be precise and dialled in. And obviously I didn’t have that. Obviously I need to get a little better for The Open [at St Andrews] and I’ll keep working at it.”

A little better? That has to be the understatement of the week.