Following the introduction of its highly innovative HYPERFLEX footwear in early 2015, FootJoy has expanded its line with shoes equipped with the popular Boa® Closure System.

HYPERFLEX, the most distinctive category in FJ’s history, features innovative materials like the new FlexGrid™ exoskeleton to deliver lightweight support and cushioning, giving the comfort of athletic footwear with the stability and performance of a golf shoe.

Each of the two new styles now available with the Boa Closure System enable players to enjoy all of the benefits of wearing HYPERFLEX with an additional level of custom, micro-adjustable, consistent fit.

“When we first learned of this new alternative system to laces, it didn’t take long to realize there were many similarities between the brands that have, years later, resulted in a long-standing, successful relationship,” said Doug Robinson, FJ Vice President of Design and Development.

“The Boa Closure System, like the FJ line of golf shoes, has undergone significant improvements since the first collaborative product was introduced and now, with HYPERFLEX, we’re excited to marry their most advanced system with our latest performance product.”

FJ was the first golf shoe manufacturer to implement Boa after it had gained popularity in other industries, like snowboarding, cycling and hiking. In fact, the collaboration between the brands dates back to 2004 when FJ first began developing a shoe that integrated the closure system, called ReelFit. 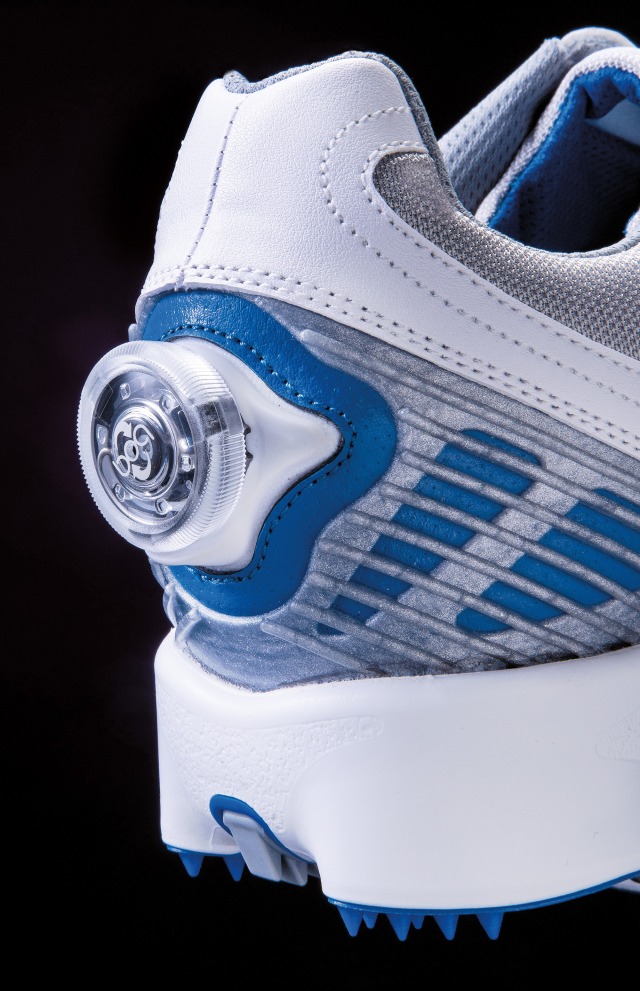 Since then, the system has gone through numerous iterations and been incorporated in a wide range of FJ shoes, including Tour-calibre categories FJ ICON™, D.N.A. ™ and Contour Series™.

After testing all possible locations for the Boa dial mount, FJ concluded the heel-mounted system was ideal for golf. As the system is engaged, the Boa Dial pulls the stainless steel laces evenly through the nylon guides on the top of the shoe and back through the collar, gradually guiding the foot down and back into the heel pocket, as the collar surrounds the ankle for a secure, consistent and comfortable fit.

In addition, the even dispersion of pressure across the top of the foot eliminates friction, pressure points and the inconvenience of traditional laces.

The ability to micro-adjust the dial also allows the golfer to dial in a truly custom fit. Comprised of 49 strands of aircraft-grade stainless steel, the laces are soft and flexible for comfort but also stronger per gram than tank armour, so will not loosen or break during a round.

“I am an avid skier and have worn boots with the Boa system before,” said three-time PGA Tour winner, Charley Hoffman. “Once FootJoy came out with the Boa option, it was an instant fit for me because you never have to worry about your shoe coming loose during the round and you have a perfectly even fit throughout the entire shoe.

“Once you tighten them up in the locker room, you don’t have to worry about them the rest of the day.”

In addition to the four laced styles already available from FJ partner retailers, two Boa styles are now in stores in White/Light Grey/Royal Blue and Charcoal/Orange colourways with an RRP of £150.

Whether it is the all-round excellence of ICON Black™,  the advanced feel of D.N.A™,  the athletic performance of HYPERFLEX, the reliability and consistent performance of the DryJoys™ family or the superior comfort of Contour Series™, FootJoy remains the overwhelming favourite for golfers of all abilities around the world.

For more information on HYPERFLEX and to learn about the shoe’s inspiration story, visit www.footjoy.co.uk/HYPERFLEX or follow the brand on twitter at @FootJoyEurope

To find out about FJ’s partnership with Boa, visit www.footjoy.co.uk/fjlegacy/boa